What A Healthy Walter Thurmond Would Mean 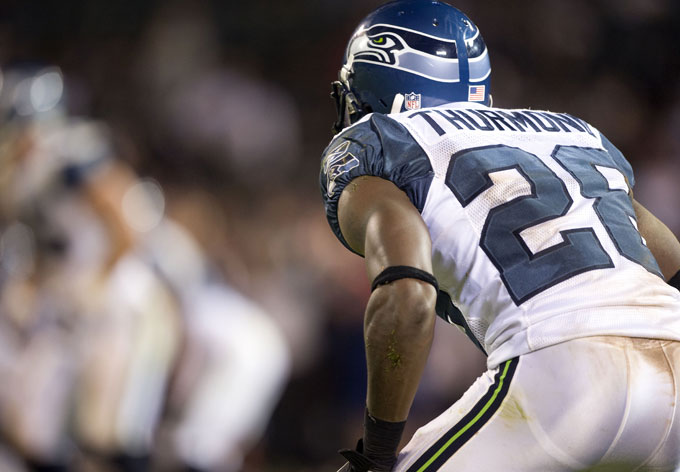 NFL off-seasons are chock full of paper tigers. Players that appear ready to burst onto the NFL scene, based on pad-less OTA practices and coaches comments. Then, the season comes, and it almost seems as if the coaches, the player and the media turn toward the fans in unison and say, “Gotcha!” The promise turns to disappointment and even a little bitterness for those that feel duped. One would think fans would eventually wise up to this repeated pattern, but, as Pavlov showed us, all you need is a little intermittent reinforcement to cause dogs–or football fans–to ignore the lessons of history. One player that fulfills the promise is enough to keep hope alive. Walter Thurmond represents a legitimate threat to make all Seahawks fans patsies again. He could be that one guy that lives up to the off-season hype, and leaves the 12th man vulnerable to the next dozen posers.

Thurmond has long been a favorite of mine, but ironically, his one healthy season was the nadir of my appreciation for his talents. He did not miss a game his rookie season, but Roy Lewis had outplayed him and earned a spot on the depth chart above Thurmond. It was not until he stepped in for an injured Marcus Trufant during his sophomore season that Thurmond’s immense talent started translating to on-field excellence. Go back and watch the game in New York against the Giants from 2011. Thurmond blanketed receivers all over the field. Vertical patterns, crossing routes, digs, outs, it did not matter where the receiver was running because Thurmond was in his hip pocket. He proved he could slide inside or play on the edge. He was strong enough to play larger receivers and fast enough to stay with shifty ones.

His injury during the Browns game was tragic. Yes, it allowed Richard Sherman to emerge as an All-Pro corner, but it robbed the team of a player that may equal Sherman’s talent. Yes, Thurmond is that good. He is also the only corner on the roster that can play any corner position. His 2013 season will be among the most intriguing, both because of the significance it has for Thurmond as a player and because of the possible quandary the Seahawks front office could face next off-season when he, Antoine Winfield, and Brandon Browner become free agents.

If you were John Schneider, and you wanted to make a decision about which corner to re-sign, what would you want to see in order to make the most informed choice? Browner is largely a known quantity at this point. He will also be 30 after this season. Antoine Winfield is also a known quantity and will be 36 next year. The guy who is least proven is Thurmond, at age 25. Schneider needs to see Thurmond play. Set aside injury for a moment, since it is obvious Thurmond will not garner much interest if he sustains another serious injury. When I say they need to see Thurmond play, I am talking about earning playing time.

Sherman is a fixture at one corner. There are no other fixtures. Browner is a Pro Bowl corner with a unique physical presence. Winfield is possibly the best nickel corner in all of the NFL and took less money to come play in Seattle. Both could lose playing time to a healthy Thurmond, and possibly even fall behind him in the depth chart. This is possibly the truest test of Carroll’s competition mantra.

Sure, Russell Wilson beat out the higher-priced Matt Flynn at quarterback last year, but there was no established starter. If Carroll truly wants to win forever, younger players like Thurmond need to be given every opportunity to unseat established veteran starters. That’s not to say Thurmond should be given any edge due to age, but neither should he be held back due to another player’s reputation. The best player should play, period.

Browner is one my personal favorites on this team. I love what he brings in terms of toughness, and even enjoy his occasional forays past the legal limits of physical play (don’t try to play tough guy Greg Jennings). Judging his value on the open market is difficult. He will be older, but very well could have two Pro Bowls in three years to his name and catch the eye of some team that is swept up in the Carroll-induced gold rush for tall corners. Seattle will not overpay for his services. They have Sherman, Earl Thomas and Kam Chancellor that require top dollar. The other corner cannot be a highly-paid player.

Thurmond is a wildcard. He may command more money than Browner as a free agent even if his pedigree comes nowhere close. He is younger and more scheme-diverse than Browner. There is a chance that he becomes one of the bigger free agent targets next year if he manages to stay healthy. That is why the wise move for the Seahawks would be to sign him to an extension right now.

The Seahawks face the real possibility of losing two-thirds of their starting corner trio next year in Browner and Winfield. They could choose to extend Browner, but his age and accomplishments will make that difficult, as he will want to get his big pay day. Thurmond can play outside and inside, and may be better than either of the other two players. He and his agent know they risk a disaster in free agency if Thurmond gets hurt again, so they should be open to some guaranteed money over 1-2 years that would allow Thurmond to hit the market again when he is still young enough to get a big deal. The Seahawks would roll the dice that they were locking in a Pro Bowl-caliber corner at a bargain basement price. Even if Thurmond got injured again, the length and price of the deal would not hamstring the team.

How that would play in the locker room is a separate question. It would be a clear sign that the team planned to move on from Browner, a guy that has earned his money. Still, it would be the wise business move to manage risk to the roster. The other options would be to extend Browner, which is not likely, or to wait and see how things turn out after the season which could very well result in the loss of all three players. Yes, there is depth in Byron Maxwell, Jeremy Lane, Tharold Simon and others, but none of them have come close to showing the sort of ability that Thurmond has.

These are the questions the front office must ponder while fans and media are busy salivating over OTA all-stars. A position of immense depth for 2013 faces risk in 2014 that could be mitigated by a savvy, proactive extension. The Seahawks should act fast, as Thurmond’s play on the field may quickly remove any leverage the front office has.