A Look At Seahawks Offense Without Harvin

The prevailing story about the potential loss of Percy Harvin is that it would be a huge loss. Maybe it would be. Nobody really knows until the team takes the field with him. Anyone that says the Seahawks offense is in trouble without Harvin should take a look at last season. 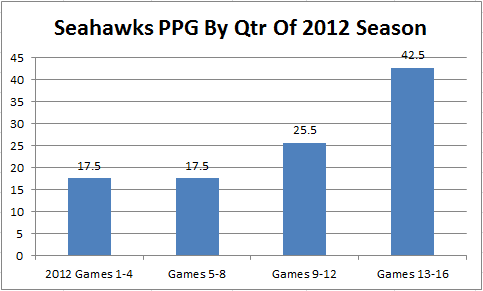 None of this is to say Harvin is unimportant. He may help the offense be more consistently dominant against a wider variety of defenses. He was a big part of how an inferior Minnesota Vikings team beat up on the San Francisco 49ers last season. His presence simply is not necessary for this to be a Super Bowl-caliber offense. I had not been in favor of making a deal for him prior to the trade, but have been intrigued by how he could make the offense more diverse after. I need to see Harvin super-charging the offense before I shed a tear about his absence. That is not the case for every new addition. It is clear how players like Jesse Williams, Cliff Avril, and Michael Bennett can help the team vastly improve. Harvin was added to a receiving corps that was already underutilized. He will struggle to get 65 receptions in this offense, but those catches could be game-changers. Fans will have to settle for the trio of Sidney Rice, Golden Tate and Doug Baldwin that all look ready for stand-out seasons, and an offense that may only average 30 ppg instead of 32 ppg.
Start typing to see results or hit ESC to close
softy russell wilson real hawk talk 49ers cardinals
See all results
More Stories