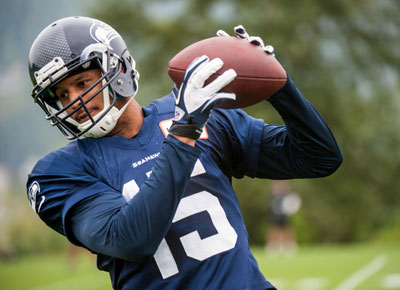 The end of training camp public practices is hardly a meaningful NFL milestone. There is still almost two weeks until rosters have to be trimmed to 75 players (August 27th). Still, there were players that stood out over the last two weeks that deserve some recognition.

HONORABLE MENTIONS: WR Doug Baldwin, RB Christine Michael, WR Stephen Williams
No player made a bigger leap from last year to this year than Kearse. He is playing with the confidence of an early-round pick, and his results have been pretty darn close to that level. He is the second-best separation receiver on the team behind Doug Baldwin, can play all three receiver positions, and has the most diverse route repertoire of the bunch. He caught go-routes down the sideline, crossers, curls, seams, posts, back shoulder, slants and more. He is not excellent at any one thing, but he is above average at all of them.

HONORABLE MENTIONS: DT/DE Michael Bennett, CB Richard Sherman, FS Earl Thomas
Bryant is playing like every snap is his last. A man that big, and that strong, playing with that kind of emotion is a sight to see. This could be his career year.

HONORABLE MENTIONS: RB Christine Michael, TE Luke Willson
Both Christine Michael and Luke Willson merited consideration here, but Bailey has been a revelation at left tackle after going undrafted as a guard. Set aside the novelty of a college guard becoming an NFL tackle. Bailey has played like a second-round tackle, maybe even a first-round tackle. He was so good that it was difficult to notice how good DE Benson Mayowa was until he started facing other lineman because Bailey was stoning every player thrown his way. The ceiling is undefined for Bailey, but he will start in the NFL at some point.

HONORABLE MENTIONS: DE Benson Mayowa, DT Jordan Hill
Yep, that makes two undrafted rookies taking home top honors. One might argue a third, Mayowa, is second in line behind Lotulelei on defense. There is little doubt that Lotulelei will become an impact player. The only question is whether he will become a star. If I was forced to predict right now what the future holds for him, people would want to check my drink. I see a guy who may become the Seahawks biggest playmaker on defense over the next 2-3 years.

HONORABLE MENTIONS: RB Christine Michael, OL Alvin Bailey
Williams earned a lot of buzz for his big performance in the first pre-season game, but he was making plays from snap one in training camp. Just ask Jeremy Lane how it feels to defend 6’5″ with Elastic Man arms, 4.4 speed and jumping ability. Williams needs to continue to prove he can do it in games and stay healthy. His frame is not built to take a pounding. Should he blossom in the regular season, this may be the player that causes the front office to move on from either Sidney Rice or Golden Tate in 2014.

HONORABLE MENTIONS: LB John Lotulelei, LB O’Brien Schofield
Bennett has played LEO, 3-technique defensive tackle and 5-technique defensive end. He has made plays from every spot, and was on the field for nearly every practice. His value is hard to quantify, because his versatility allows Dan Quinn to do things he might not be able to attempt with any other player. This guy was an absolute steal.
Start typing to see results or hit ESC to close
softy real hawk talk russell wilson 49ers rams
See all results