A fair amount has changed since my last post on roster projections. A number of players have moved on, either via trade or cuts. The only one that qualified as a minor surprise was John Moffitt. There has been enough talk about waiving players I expect to make the team that I decided to sit down one more time and review things. As always, we start with the work of Eric Williams, from the Tacoma News Tribune, who has compiled the average number of players kept at each position over the past few years, and then I modify to my projections for 2013. 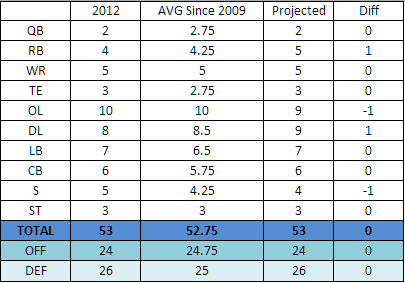 The injuries on the defensive line have thrown things into a bit of disarray. The team will likely need to keep one extra lineman given the state of Chris Clemons, Cliff Avril, Brandon Mebane, Tony McDaniel and Jordan Hill. They likely get that by pulling one from the offensive line. The team rarely goes with less than 10 offensive lineman, but their cross-training should come in handy now, and practice squad will make for a great place to stash a few qualified reserves should they need them later. I have reluctantly upped the running back number to five because I am increasingly wondering about Michael Robinson making the squad. If Robinson goes, I expect both Derrick Coleman and Spencer Ware to make the team for maximum options at fullback.

There are 48 players that I have listed as high confidence or locks, leaving five spots in the air. The bubble guys I am currently projecting to make the team are:

Robinson has been discussed ad nauseum, but his recent health issues make the situation that much more challenging for the popular veteran. I do not see six receivers worth keeping on the roster. Bryan Walters is very close, but has not been healthy enough to prove it in games, and I don’t believe a stellar performance versus Oakland would even be enough to cut another guy elsewhere on the roster. Jermaine Kearse can play all the receiver positions and Stephen Williams offers depth across the board as well.

Johnson is a certain practice squad player if he is not signed elsewhere, and is a perfect player to have available to call up to the active roster if needed.

Mayowa is the biggest heartbreak of the bunch as the team needs to shore up the rotation at defensive tackle more than at LEO. Keeping a guy like Siliga over Mayowa happens only because the team is thin at run-stuffing tackles. McDonald would be the guy, but his salary works against him here. If Clemons somehow is kept on PUP, than Mayowa makes it. Otherwise, they have Avril, Clemons, O’Brien Schofield, and Mike Morgan all at the LEO spot with Bruce Irvin coming back in four weeks. Avril and Clemons may not be ready week one, but the team can play Malcolm Smith at SAM and rotate Morgan and Schofield at LEO for one week. Defensive tackles wear down as the season progresses, so having a healthy rotation from the start is key.

There is another scenario where Mayowa sticks, and that is if the team decides to part ways with Howard. They have both Michael Bennett and Jordan Hill at the disruptive 3-tech spot ahead of Howard. Still, Howard projects to have a bigger role across the whole season than Mayowa will once the whole LEO group is back in action within a couple of weeks.

I’m not sure why people continue to pick Farwell to make the roster. He is listed as third on the depth chart at MIKE behind Bobby Wagner and Allen Bradford. He is great on special teams, but that is not enough of a reason to keep him and his $1.3M salary. John Lotulelei can be great on special teams and on the field and is locked up for years. Choosing Farwell over Lotulelei would be a major head-scratcher. Mike Morgan makes it over Farwell because he is also a great special teams player, can back up all three linebacker spots, plays LEO, and makes a lot less money. This position group should be straight-forward.

DeShawn Shead makes it over Chris Maragos if the team only goes with four safeties. I think they may steal from safety to help keep an extra running back or defensive lineman. If they choose to go with four running backs, safety is the most likely place they go back to five. Maragos probably comes back in that situation, but his salary works against him as well.