Before looking forward, it is useful to look back. The 2012 season was among the best in franchise history by any measure. It started off looking like it might turn into yet another Seattle 7-9 win year as they stumbled to 4-4 after eight games. A 7-1 sprint to the finish line made the year anything by mediocre. All cylinders were firing. All limits were removed. 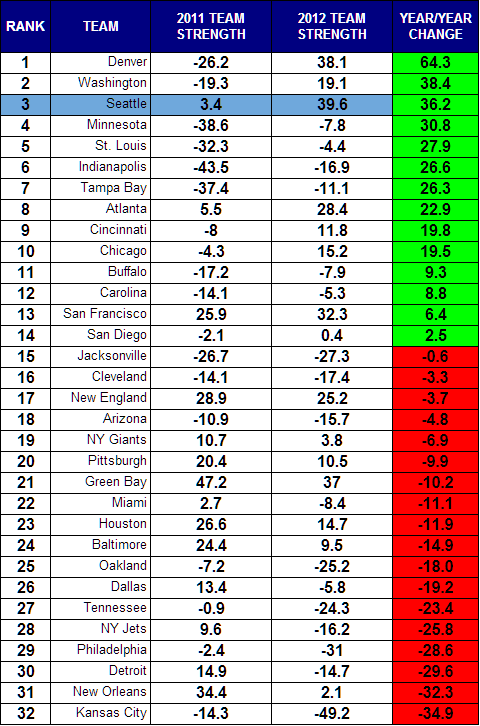 This says that Seattle was the 3rd-most improved team in the NFL last season, after checking in as the 6th-most improved team the year prior. Pete Carroll and John Schneider are doing work. Nine of the 16 games played in 2013 will be against teams that improved last year. The Saints are near the bottom, but there is reason to think they could be among the most improved this year. 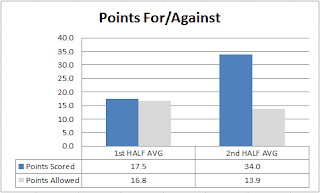 No stat may better capture the transformation of this team than the most basic of them all, points for and point against. Seattle spent the first half of the season barely outscoring their opponents. They were scoring 17.5 ppg, which would have ranked 29th in the league if they had finished the year there. The last half of the year saw a dramatic shift. Seattle upped their scoring output to 34 ppg, basically twice what they were scoring in the first half, and they outscored opponents by a mind-boggling 20 ppg. They were outscoring teams by more points than they averaged in the first half of the season. The defense did not make as much of an improvement in absolute numbers, but holding teams to less than 14 ppg for eight games is nothing to scoff at. There is no way around it. These were juggernaut numbers.

Cutting the season by a half makes the transformation to a powerhouse appear drastic, as if a switch was flipped. That would not be an accurate portrayal. 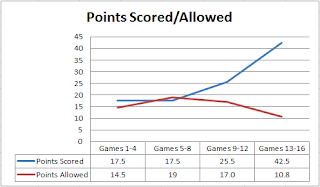 The Seahawks were making a steady climb from the eighth game on, increasing their scoring from 17.5 to 25.5 in the third quarter of the season and then from 25.5 to a ludicrous 42.5 in the final quarter of the year. Their defense clamped down more and more. Teams were only scoring 10.8 ppg in the last quarter of the season. In an insane span of four games, the Seahawks outscored opponents by an average of more than 30 ppg.
How did they do it?

The underpinnings of offensive greatness 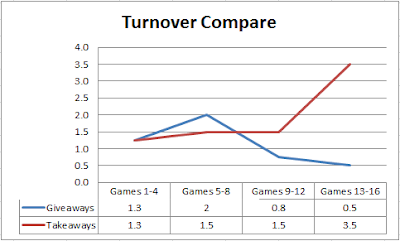 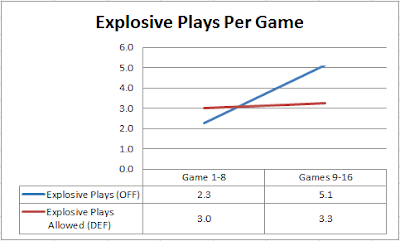 A few areas of growth were fundamental to the change in outcome for the Seahawks. They were having a tough time taking the ball off opponents through eight games, and really through the first twelve. Seattle was actually negative in turnover differential through the first eight games. They finished 6th in the NFL thanks to a drastic uptick in takeaways and a new-found stinginess on offense. Russell Wilson and the offense also discovered a recipe for explosive plays. They more than doubled their explosive play output from the first half of the year. These two areas combined to propel the team scoring higher and limit opponents. There was more.

The Seahawks offense saw steady and significant gains in 3rd down efficiency, most importantly, red zone efficiency. Unlike the other charts I have shown thus far, these numbers are cumulative instead of discrete for each quarter of the season. For example, Seattle went from a team that was scoring a touchdown on only 28% of their trips to the red zone to a team that ended the year scoring 57% of the time. That means they were well over 57% the last twelve games of the season. Combined, their 3rd down efficiency and red zone efficiency meant this was a team that sustained drives better and were lethal when they reached scoring position.

One of the most common misconceptions is that Wilson passed the Seahawks offense to greatness. His growth as a quarterback was undoubtedly a major part of the team metamorphosis, but the running game was what truly took off. 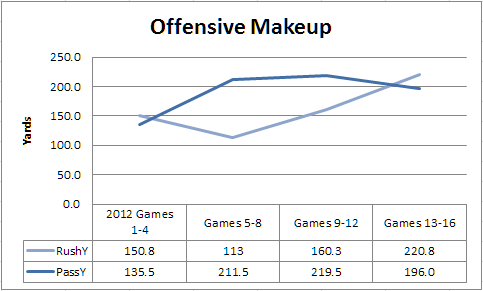 By the end, the Seahawks were running for over 20 yards more per game than they were passing. Wilson was a big part of that as he ran for 74% of his rushing yards and all four of his rushing touchdowns in the seasons final eight games. Some theorize that the rushing totals were artificially inflated by playing with a lead. The Seahawks came out running from the opening whistle all season, and were rarely behind at any point in the season by more than one score. 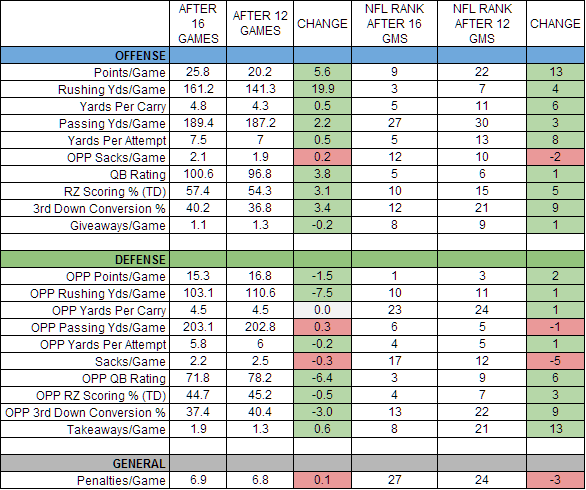 Seattle fans and players have spent an off-season acclimating to the reality that their customary position of no respect underdogs simply does not fit this team, and probably won’t for the next decade with Wilson at the helm. They have ascended to legitimate contender, answering every question but the ultimate one in February.

Football seasons are like Seattle beers. No two are the same. This team has some new faces, and will face different teams and different challenges than the 2012 squad. Part three of the Hawk Blogger Seahawks Season Preview will dive into the new faces that will play a role in determining whether this team will be the one to become Super Bowl Champions.