The Saints: What I’ve Learned 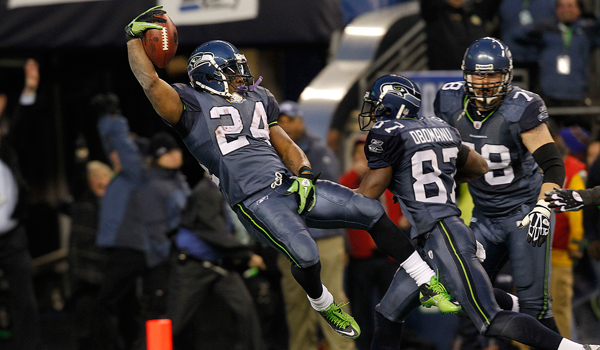 Among the many things we can be thankful for today is that there is an exciting football game inching closer for the Seahawks and the Saints. I have spent the last week getting to know the 2013 Saints better, and have a few observations to pass along.

Drew Brees and Jimmy Graham dominate the headlines, but it was the New Orleans running game that impressed me while digging into their numbers and watching them play. Pierre Thomas is a big part of how that offense creates rhythm. Both he and Mark Ingram are running hard and wasting little motion laterally. They will never shake a tackler, but they will run through them. Combine their North-South style with impressive interior line play led by very good guards, and the Saints are certain to test Seattle’s interior rush defense.

New Orleans has been fortunate in facing a number of bad quarterbacks on the road. Russell Wilson will be among the best their defense has seen. The three most reputable players the Saints have gone up against are: Jay Cutler, Tom Brady, and Matt Ryan. Those three have combined for a 97.7 rating that included a 69% completion rate and nearly 8 yards per attempt. It is worth mentioning that the Saints won two of those three games, but they were lucky to escape Chicago with a win, and the Falcons were in the game throughout, despite being a team legitimately in the hunt for the first overall pick in the draft.
Rob Ryan’s defense relies a fair amount on deception and catching opposing offenses off-guard with timely blitzes from a variety of positions. More prepared quarterbacks are better equipped to identify and defuse those plays. Of the 26 explosive passes the Saints defense has surrendered on the road, 18 (70%) of them have come at the hands of Ryan, Brady and Cutler.

There is plenty of talk about how the Seahawks losses in the secondary could impact this game, but if there was one position group I could pick to step up and have a great game, it would be the linebackers. There may not be a team in the NFL that puts more strain on linebackers than the Saints. They need to fill the gaps in the run game, get out wide to contain screens and swing passes to players like Darren Sproles, and get appropriate depth in their zones against guys like Lance Moore and Graham. No human can be in three places at once, so Bobby Wagner, K.J. Wright and Bruce Irvin will need to diagnose plays well and make sure tackles. Brees makes ample use of his running backs–Thomas and Sproles are #2 and #4 in targets for New Orleans–in the passing game, and is happy to take yards after the catch wherever he can get them. This could be a great game to rotate Malcolm Smith in. He is ideally suited to face offenses like this as he has demonstrated great ability to read the run game and the screen game, while also being a plus coverage linebacker. Graham is not priority one or two for this group. The linebackers must first fill the gaps with the verve they displayed versus the last two opponents, and then discourage the screen game and swing pass. Graham can get 150 yards and two touchdowns and still lose. It would be far harder to beat this team if they are getting steady yardage on the ground and via low-risk throws.

I am always skeptical of defenses that make a big leap from one year to the next when they add a defensive coordinator known for exotic schemes. Rob Ryan likes to be the star of the show, and the network cameras are happy to oblige. New Orleans, however, has legitimately improved their personnel, which is a bigger reason for the improvement than their new coordinator. Akiem Hicks has specific relevance to this game. This is his second season, and is thriving as a 3-4 DE in Ryan’s system. He is one of the better run defenders on the line, and shows some pass rush ability from time-to-time. How Breno Giacomini and J.R. Sweezy handle him will be key to the running game.
The linebacker crew is playing extremely well, led by ex-Seahawks David Hawthorne. Seattle fans remember how well Hawthorne closed gaps versus the run and tackles with passion. He looks back to full health, and is having fun playing behind this active defensive line. Junior Galette is a favorite pass rush option for Ryan, and has 5.0 sacks to show for it.
Blitz pick-up will be more important than normal in this game, which means the tight ends and running backs will have to be on point. The Saints lead the NFL in sack percentage, and have been very consistent at creating pressure both at home and on the road. Cameron Jordan is the centerpiece, but Pete Carroll and Tom Cable have demonstrated a good ability to scheme for single pass rushers on the edge. Handling the games and extra rushers Ryan likes to send is a far bigger focal point for Seattle.

New Orleans has a rookie safety in Kenny Vacarro, a third year safety in Rafael Bush, and a second year corner in Corey White that all see significant action. White has been playing well, but is being asked to step into a starting role after Jabari Greer was lost for the season versus San Francisco. Vacarro is a guy who likes to fill versus the run, but has already had two concussions doing so. The Greer injury means veteran Chris Carr has to step up as well. The 49ers were struggling to get a first down before Greer was injured, but things opened up more after. The Falcons are limited in so many ways, but still passed with high efficiency against this newly minted secondary personnel for the Saints. There is no doubt that the Seahawks offense will be the biggest test this group has faced, and the variety of weapons at Seattle’s disposal has to be giving Ryan indigestion.
Look for Ryan to try and protect his secondary with aggressive pressure packages to try and induce Wilson to get rid of the ball quicker and to more predictable targets. If the Seahawks can pick up pressure or if Wilson can escape pressure, the Saints secondary could be in for a long day.

There have been two games this season when the Saints have been held to 2 sacks or less. They lost one, and won the other by two points versus Tampa Bay.

Percy Harvin has not been a full participant in a game plan yet this season. The Saints have no way to know how the Seahawks will use him. He may be the most talented player on the offense, but nobody can say for sure until he plays full tilt. Imagine if the roles were reversed, and the Seahawks were playing the Saints on the road on Monday Night Football and Brees was getting back Harvin for the first time. That is largely what the Saints are facing. Wilson is not Brees, but he is a top five quarterback this year, and it is the Seahawks that are second in the NFL in scoring, not the Saints.

The forecast is calling from some rain/snow mix Monday morning, and clear and cold (under 40 degrees) at game time. Anybody that lives in the PNW knows forecasts are crap in Seattle. It will be cold. That seems highly likely. The rest of it is anybody’s guess. If it is just cold, advantage Seattle. If it is cold and raining, bigger advantage Seattle. If it is cold and snowing, biggest advantage Seattle. Brees and this Ferrari offense are not built for games like that. Their improved running game gives them a chance, but if Brees is slowed, the team will be hard-pressed to score points.
Start typing to see results or hit ESC to close
real hawk talk softy russell wilson 49ers rams
See all results