An In-Depth Look At Seahawks Offensive Struggles & What Should Change

Seattle lost a game to the Cardinals last weekend, but their offense has been struggling for much longer. As we wait for the season finale on Sunday versus a Rams team that handed Seattle their worst offensive performance of the Pete Carroll era, it seemed worth delving a little deeper. No one thing is causing the Seahawks offensive decline the past three weeks. A variety of factors are at play.

Marshawn Lynch ran for 91 yards in his first game against the Cardinals, but managed only 71 in the second. I charted each carry in both games, documenting personnel groupings, which direction the run went and how many players the Cardinals stacked in the box.
Something changed drastically in the Seahawks game plan from game one to game two. Thirteen of Lynch’s 21 carries went up the middle in Arizona. He gained an average of 4.7 yards on those carries. Only three of his 18 carries back in Seattle went up the middle. Tom Cable must have liked the idea of his starting tackles back in this game. He ran left eight times and right seven times, averaging 5.0 yards per carry going right versus 3.6 heading left.
My initial hypothesis was that part of why Lynch and the running game struggled more in the second game was due to more defenders committed to the run by the Cardinals. That turned out to be completely wrong. The Cardinals had 8 or more men in the box on 61% of Lynch’s runs in the second game compared to 71% in the first game. Seattle actually faced fewer run defenders the second go-around. Add to that, Lynch fared better against 8+ men in the box (5.4 YPC) in the second game than when there were 7 or less (2.3 YPC). That performance against a standard 7-man front was in stark contrast to the whopping 8.3 YPC the Lynch managed in the first game.

Something else changed, though. Derrick Coleman was injured in that first Cardinals game. Before he got hurt, Lynch ran behind a fullback on five of his first nine carries and averaged 5.0 yards per tote. He averaged 3.8 on his remaining 12 carries. Michael Robinson was signed after that game. He played sparingly in that Rams game, but then started to play significant snaps over the next four games, which happened to coincide with Lynch’s two highest rushing totals of the season. He has had three 100-yard rushing performances in 2013, and two of them came in the three weeks following adding Robinson back to the mix. 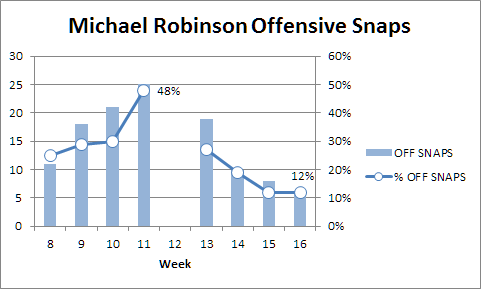 The coaches clearly did not see the correlation between Robinson’s snap count and Lynch’s productivity, because they have drastically reduced his snaps the past three weeks. He played just six offensive snaps versus Arizona last week.

Lynch is a player with immense talent, but his strength is in running people over, not in reading the running lanes. He trusts Robinson like nobody else. When Coleman was his lead blocker, he was far less likely to follow him into the hole, and often ad-libbed. Watch him when Robinson leads. They are like train cars on a track. Trust.

At this point, no fullback is making a difference because the team has shifted the fullback snaps elsewhere. Jermaine Kearse and  Luke Willson, among others, have seen increased reps that are coming at the expense of the fullback. Coleman’s return from injury has also meant Robinson is splitting what few fullback snaps there are with him.

Watching Lynch on tape these last few games shows a guy who is searching for a hole that is not there. He is moving laterally far more at the line of scrimmage than last season when he would commit to a hole and run through it. Part of the reason for that is there is a guy waiting for him in the assigned lane nearly every time. Robinson does an excellent job, far better than Coleman or Miller or Willson, as a lead blocker. It was no accident that Lynch averaged 6.0 yards per carry when following Robinson’s lead on Sunday.

Robinson played 32% of the offensive snaps last season. Seattle would be wise to get him back to that level. It will not single-handedly turn the rushing game around, but it is something they can control. Making 2013 Max Unger into 2012 Max Unger is not nearly as straight-forward. Do not be surprised, however, to see Michael Bowie starting to steal snaps at guard.

Golden Tate is not a separation receiver. He makes plays in traffic, and can run after the catch if given the chance. To take advantage of his skill set, a team has to force-feed him the ball because he will not get open on his own in most cases. Darrell Bevell and the offense was far more committed to that early in the season than they have been of late.

Golden Tate was targeted 7+ times in 6 of the first 10 games, but only once in the last 5

Teams are working to take him away, and the offense is suffering for it. Seattle needs to re-commit to getting the ball in Tate’s hands in a variety of ways. It cannot just be down-field throws. He has struggled to make some of those high-point catches the past few weeks, most notably in New York. It feels a little like a jump shooter that needs a layup to see the ball go in before the rest of his game opens up. A few wide receiver screens or short crossing routes could go a long way toward getting Tate back on track, and the offense along with it.

Coaches can get in a rut just like players. Bevell and Cable need to take some responsibility for how the offense has sputtered the past few weeks. They have dialed up a number of deep passes, but without the running game setting them up. Seattle has been at it’s best when the running game is chipping away, and play-action passes off that create explosive plays down-field. 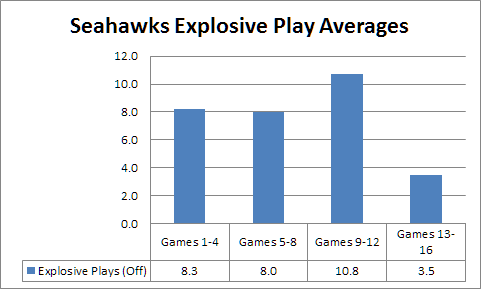 Those explosive plays have all but disappeared the past three weeks. The play-calling has appeared desperate at times to create those explosive plays instead of earning them with smaller gains on the ground and through more conservative pass plays. There have been fewer stop routes, slants, crossing patterns and screens. These plays will not usually net big yardage, but they can mean the difference between 2nd and 10 and 2nd and 6.
Seattle needs to rediscover their ball control attack in order to unlock their big-play ability. 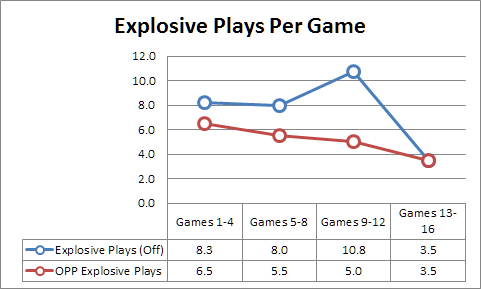 As you can see, the defense is doing more than it’s share to control explosive plays for the opponent. This is the first quarter of the season where the Seahawks have not enjoyed a decided advantage in explosive plays per game. The offense needs to start pulling their weight in this regard, and that starts with better results on early downs with higher percentage runs and passes.

So much is made of how the Seahawks perform on third down, and for good reason. Seattle averaged 32 ppg and 419.5 yards per game in their four best third down games of the season compared to 18.8 ppg and 255 yards per game in their four worst third down games. Doing well on third down is about far more than how the team performs on that particular down. The down that people should be paying more attention to is first down.
No team is great at converting 3rd and long, but Seattle is 26th in the NFL at just 15.5%. Team like Denver and San Diego can convert at double that rate. So that means getting yards on early downs is paramount for the Seahawks, and they have not been doing that of late.
Over the last three games, the Seahawks are averaging 4.68 yards on first down, down more than a full yard compared to their first 12 games (5.95). They were 6th in the NFL in first down yardage over those first 12 games. They are 20th in the NFL over the past three games. To hammer home just how much of a belle weather down this is, Seattle has averaged a whopping 6.5 yards on first downs in their four best 3rd down performances, compared to 4.6 in their four worst. That is a massive two-yard gap, and if you didn’t notice, that low number is exactly what they have been averaging the past three weeks.
A lot of this goes back to the three things above. Coaches have every option open to them on first down. Seattle is being out-schemed and out-executed on first down, and it is having a cascading effect on the rest of the downs. They have become more likely to pass on first down than they had before.
During those first 12 games, the team ran on 61% of first downs and passed 39% of the time. That ratio has closed to 57% run and 43% throw the last three weeks. This offense is built on the run setting up the pass. They consistently do it against extra men in the box, so this is a conscious choice to move more toward passing than the defense forcing their hand.

The Seahawks head into their final game of the regular season with something to prove. Their offense has not been performing at a level close to their standards. They face a defense that embarrassed them earlier in the season, and given them fits in prior years. It shapes up as a good test for a team that appears to thirst for adversity and doubt to sharpen their focus.
Percy Harvin is not coming to the rescue, and it appears Christine Michael will remain in lock-up as well. The men that built one of the most prolific offenses in the NFL over the last 8 games of 2012 and first 12 games of 2013 need to find their footing again.
It starts with a renewed commitment to execution on first down. Short passes and greater percentages of run plays is a good place to start. Increase the utilization of Robinson as a fullback to keep Lynch running in a straight line and allowing the offensive line a little more room for error. When there are two tight ends or three receivers, there is nobody to clear out the man waiting in the running lane. Every block must be right. A player like Robinson gives Lynch that little extra chance to gain yardage.
Coaches need to get Tate back into the flow. He went without a target in the first half on Sunday. It doesn’t matter who is guarding him. The team needs to find high percentage ways to get him touches.
And last, but far from least, Russell Wilson needs to get back on his game. He has been uncharacteristically inaccurate the past three weeks. After four straight games of 72%+ completion percentages, he has been at 60% or less in two of the last three. He had seven straight games of a passer rating above 91, but has not risen above 86.3 in any of his last three. There is no doubt he is capable of better play than we have seen the last three weeks. His team needs him to regain that form.
This game will tell Seahawks fans and Seahawks players a lot about their offense. Expect them to step back into the light.
Start typing to see results or hit ESC to close
real hawk talk softy russell wilson 49ers rams
See all results