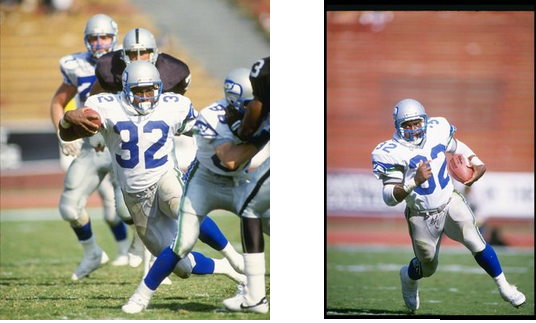 Robert Turbin is a player that has been on my mind a lot this year. I sat next to his father at Turbin’s first game as a pro in Arizona last year, and am incredibly impressed by the way he has led his life off the field. He has met a variety of family challenges with courage and integrity that most would call heroic. His rookie season was promising, if not spectacular, and he looked to be a better-than-average backup running back heading into this year, with possible starting potential. Then the Seahawks drafted Christine Michael in the 2nd round of the draft. Michael has barely played so far this season, and Turbin has not had the year he or fans would hope for. The fair question becomes what will happen next season when Michael undoubtedly will get more reps? I had assumed Turbin would become trade fodder, and that is still the most likely scenario. But as I watched a ton of game tape the last few days, another possibility occurred to me. Maybe Turbin does not have to share reps with Michael or Marshawn Lynch. Maybe he can share the back-field with them as a fullback.
Older Seahawks fans, like me, grew up watching a guy named John L. Williams turn the fullback position into something more than a blocker for eight years in Seattle. Williams was 5’11” and 232 lbs, and was one of the best receiving backs I have had the pleasure of watching play. He had massive hands that could pluck the ball from the air and his instincts in the screen game were something to behold. His running abilities were good, but he was a special player catching the ball.  He did all that while also blocking for the likes of Curt Warner and Chris Warren while they rushed for over 1,000 yards.
Williams made the Pro Bowl twice. The first time came in 1990 when he combined for over 1,400 yards in rushing (714) and receiving (699). He went for another 1,250 in combined yards the following year. He remains 6th on the Seahawks all-time receiving yards list and 4th in rushing yards. He trails only Steve Largent and Shaun Alexander in total yards gained as a Seahawk.
Turbin checks in at 5’10 and 222 lbs. Pete Carroll has complimented him on his blocking ability, saying he is ahead of where most young backs are. Michael Robinson, as much as we all like him, is getting older, and Derrick Coleman was not playing great football before he got injured and opened the door for Robinson to come back in.
The team has drastically reduced the use of the fullback overall, and is relying more and more an H-Back sets that have Luke Willson or Zach Miller lining up as a lead blocker, but why not Turbin? For one, he’d probably hate the idea. Fullbacks make among the lowest average salaries in the NFL, and he has to feel like he has not really got his shot at running back yet.
As much as I cheer for Turbin as a person, it is hard to imagine any scenario where he will maintain his spot ahead of Michael on the depth chart next season. Turbin is simply not the runner Michael is. He has an unfortunate habit of finding tacklers in the open field, which just so happens to be a skill if he was a fullback.
He is also a plus receiver that could be utilized more in the screen game. Robinson has made some big plays in the passing game as a receiver the last couple of years, including in the playoffs last season.
Getting Turbin on the field as a fullback would give defenses one more weapon to plan for. Turbin may be an average threat as a running back, but he’d be among the most dangerous fullbacks in the NFL. The trend may be to reduce the role of the fullback, but Carroll has a history of bucking the trends, and often pulls from his experience in the 80s and 90s which just so happens to be the era of guys like Williams and Mike Alstott. More than likely, John Schneider will try to recoup a 3rd round pick for Turbin, but at least one Seahawks fan would love to see the legend of John L. Williams make a comeback.
Start typing to see results or hit ESC to close
real hawk talk softy russell wilson 49ers rams
See all results