Green grass on blue clear sky, spring nature theme. Panorama or banner. Super high resolution, premium quality.
Most of my articles start with a question. Is there a problem with the running game? How do the Seahawks do with the game on the line? This one started when Pete Carroll once again decided to punt on the opponents side of the field in NY on 4th and short. Why? Carroll made reference multiple times that he “likes the numbers” when they pin a team inside their own 20 yard line. Thanks to Pro-Football-Reference.com, we can get an idea of what numbers Carroll might be referring to.

The quick project would have been to just see how teams do when they start a drive inside their own 20. I did that, and found only 11.1% of those drives result in a touchdown, and only 19.2% result in a score of any kind. More eye-catching was the fact that opponents have an equal chance of turning the ball over (19.2%) as they do of scoring when they start with the ball inside their own 20. Cool. But then more questions surface. Are those good numbers? How does that compare to the league average? What if the team starts inside their own 10? Are they even more gaudy? Sigh. Time to launch Excel and start cataloging.

Through fourteen games, here are the percentages of opponent drives that result in a touchdown, any score (TD or FG), or a turnover. It also includes a home split. I was curious how the team did in CenturyLink compared to the road, especially since it looks like we will be here a while. It also includes the league average. Cells are colored from green to red to indicate where the defense is doing well. You can use the numbers above that I gave you for the Seahawks opponent starting inside their own 20 to orient you.

You can see from this that the Seahawks holding opponents to scoring 19.2% of the times they start with the ball inside their own 20 is well above the league average of 26.2%. As is their 19.2% performance in forcing turnovers compared to the league 14.2% average. More questions.
How is it more likely for a team to score against the Seahawks if they start inside their own 10 than it is if they start inside their own 20? The answer comes from the massive drop-off in the number of drives that have started inside their own 10. Of the 99 drives that started inside the 20-yard-line versus Seattle, only 12 have started inside the 10. In case it isn’t obvious, these are cumulative numbers. All the drives that start inside the 10, also show up in the inside the 20, inside the 30, and so forth up until inside their own 50. It then builds back down on the other half of the field.
It did not seem right that only 12 opponent drives have started inside their own 10 against Seattle all year. I tried to validate the number by looking at Jon Ryan’s stats, but there does not appear a site that publishes splits for punters outside of “Inside 20.” At the very least, the Pro-Football-Reference numbers should be either wrong or right the same relative rate for Seattle as every other team. That led me down the path of trying to figure out the distribution of drive starts for Seattle opponents, and how that compared to the league averages. Below you will find another table that shows all the drives against the Seahawks, and what percent started in various spots along the field. 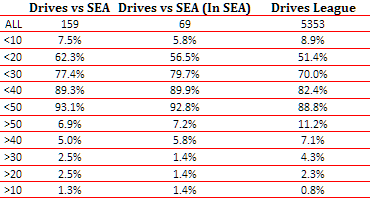 You can see that while 62.5% of opponent drives start inside their own 20, only 7.5% start inside the 10. The rest of the league has a similar drop-off. The center column is, again, just the Seahawks home games.

It is interesting to see how much higher of a percentage of opponent drives start inside their own 20 for Seattle than the rest of the league. When Carroll has a team that is well above league average in either taking the ball away or keeping the opponent from scoring when they are pinned back, of course he is going to be more inclined to kick the ball down there. Consider that the Seahawks have a higher percentage of opponent drives start backed up in their part of the field and hold opponents to a lower scoring percentage. More chances, but fewer relative successes.
It is almost unfair that the Seahawks force a turnover on nearly 25% of opponent drives started inside their own 20 in CenturyLink Field (23.1%). The league average is 14.2%.
Seattle has had very few opponent drives start on the Seattle side of the field. That is a big part of how the Seahawks have managed a pornagraphic 40% turnover rate on all those drives when playing at home. There have only been five opponent drives in CenturyLink Field that have started on the Seattle side of the 50, and two have those have resulted in a turnover. The league average in those situations is 6.8%.
Carroll has to be looking at these numbers, combined with the unprecedented prowess of the Seahawks punt coverage team and very good punt return teams, and feeling like a punt is almost an offensive play. There is very little here that would lead a coach to feel worried about giving the ball back to an opponent. It was a little surprising to see that there was not a large improvement in the numbers at home. A positive spin to that would be that the defense has been consistent wherever they have played this season.
Look for Carroll to continue pinning opponent offenses back near their own end zone. The hope is that these numbers help soothe the savage fan’s frustration, as they did mine. Go Hawks.
Start typing to see results or hit ESC to close
real hawk talk softy russell wilson 49ers rams
See all results