Seattle skyline mount Rainier plane blue sky north west city center downtown architecture corporations business working places outdoors modern landmarks Space needle tower trees colorful metropolitan cosmopolitan living skyscrapers USA picturesque post card d
Back in June and July, I published some research on some of the best defenses in the history of the NFL. The goal was to go beyond raw statistics, and try to measure defenses relative to the era and season they played in. The Steel Curtain is among the most famous defenses ever, but benefitted greatly from playing during the lowest scoring stretch of seasons in NFL history. As good as the Seahawks defense was last year, leading the league in opponent scoring (15.3) and finishing third in the NFL in opponent passer rating (71.8), the findings of my research indicated they had a long way to go before deserving mention with the all-time greats. Fourteen games into this season, the distance has closed.

My assumption when I started the research was that there would be a gradual rise in scoring throughout NFL history. Not so. The 60s had their share of points, but offenses went to pot in the 70s. ColdHardFootballFacts.com calls this the “dead ball” era of the NFL. Things picked up in the 80s with the advent of the West Coast Offense, but stayed relatively flat until a couple years ago. There are plenty of guesses to be made about why scoring has picked up recently, but for our purposes, the only thing that matters is that scoring is going way up.

That matters because just taking a snap shot of the defenses who have help opponents to the lowest totals in history tells a tainted story.

Note that six of the top ten scoring defenses played in the 70s. To factor in the context for what types of offenses these defenses faced, I calculated the standard deviation for scoring in each season. Having that number allows us to see just how exceptional a defense was relative to the amount of scoring that was going on that year.

You can see from these numbers that a team like the 2002 Bucs jumps way up the charts because their accomplishment stood out more given the scoring that was happening that season. The mix of defenses from different decades is far greater when looking at things through this lens.
The 2012 Seahawks, despite playing in one of the highest scoring seasons in NFL history, were only -1.6 standard deviations off the norm. That is a solid showing, but not necessarily hanging with the best. The 2013 Seahawks defense has allowed 14.6 ppg through fourteen games. The league is scoring more than it ever has. Those two things combine to put Seattle at -2.2 deviations from the norm. That puts them right around the top ten in NFL history, and just a skosh behind the famous 1985 Chicago Bears (-2.3).

16 of the top 30 scoring defenses in history made it to the championship game (even before it was the Super Bowl), with 12 coming away victorious

No team has ever allowed fewer points per game than the Seahawks current 14.6 in a season when the average league scoring was 22.5 or greater.

The Seahawks Legion of Boom gets plenty of publicity, and deservedly so. Each starter has either made the Pro Bowl or All-Pro team, and the three corners that come in as substitutions have proven themselves worthy of starting roles. There are plenty of advanced stat gurus that dismiss the classic passer rating as a flawed statistic. It does not take into account situation, rushing yards or sacks. The QBR stat that has become popular lately, does not go back far enough to be useful for this exercise, so passer rating will have to do. 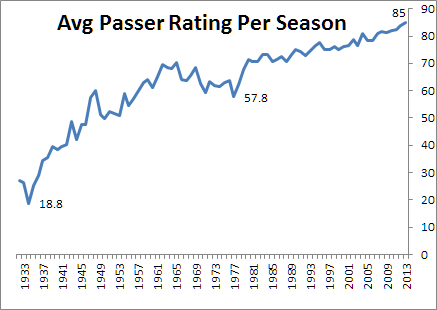 Once again, offenses are on a tear. Passer rating follows a much more predictable and consistent climb as teams mastered the forward pass. It should come as no surprise, then, that any team that could field a great pass defense after 1980 stands a pretty good chance to rank among the greats in pass defense when factoring in standard deviation. The ugly chart below includes those results. 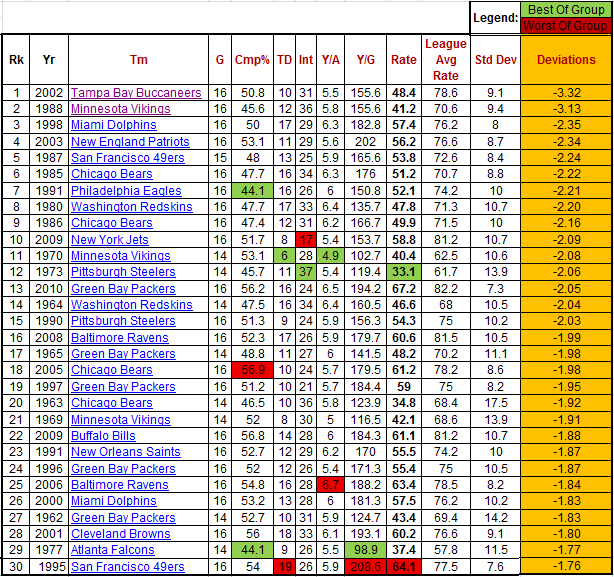 Seattle would have finished 44th on this list in 2012, as they were -1.52 deviations below the norm. Decent, but not great. This season’s defense has made a sizable climb in the ranks at -1.70 deviations below the norm. That puts them just outside the top 30 at #32. Still not elite, but when added to the scoring numbers, it becomes clear that mentioning them with some of the all-time greats is not absurd.

The 2013 pass defense would rank far higher if not for what is the largest standard deviation (11.5) of any season in the NFL. The difference between the best passing teams and the worst passing teams has never been greater, and that makes it harder to separate yourself from the pack. If the deviation was the same 7.9 it was last season, this Seahawks unit would rate as one of the five best pass defenses in history.

Seattle has two games remaining, and can improve their standing in both aspect of their defense. If the Seahawks were able to hold the Cardinals and the Rams to 17 points combined, they would lower their points per game to 13.8, and push their rank near the top five in history in terms of standard deviations from the league average.
They could realistically lower their opponent passer rating near 60, and climb into the top ten, and possibly even the top five in NFL history.
People respect this Seahawks defense, and most refer to it as the best in the NFL this year. More people need to start recognizing their place in NFL history.
Start typing to see results or hit ESC to close
real hawk talk softy russell wilson 49ers rams
See all results