The Seahawks are Super Bowl Champs. The best team in football. Players want to be with them, teams want to be like them. So starts the Dynasty Off-Season for one of the youngest teams to ever win the Lombardi Trophy. This series will dig into each position group, look at who we have, who might be available, and what the team may do in each area. It will end with a projected off-season plan. You can check out last season’s analysis here. They have been largely accurate, so if you want to know what Seattle will do before they do it, look no further. 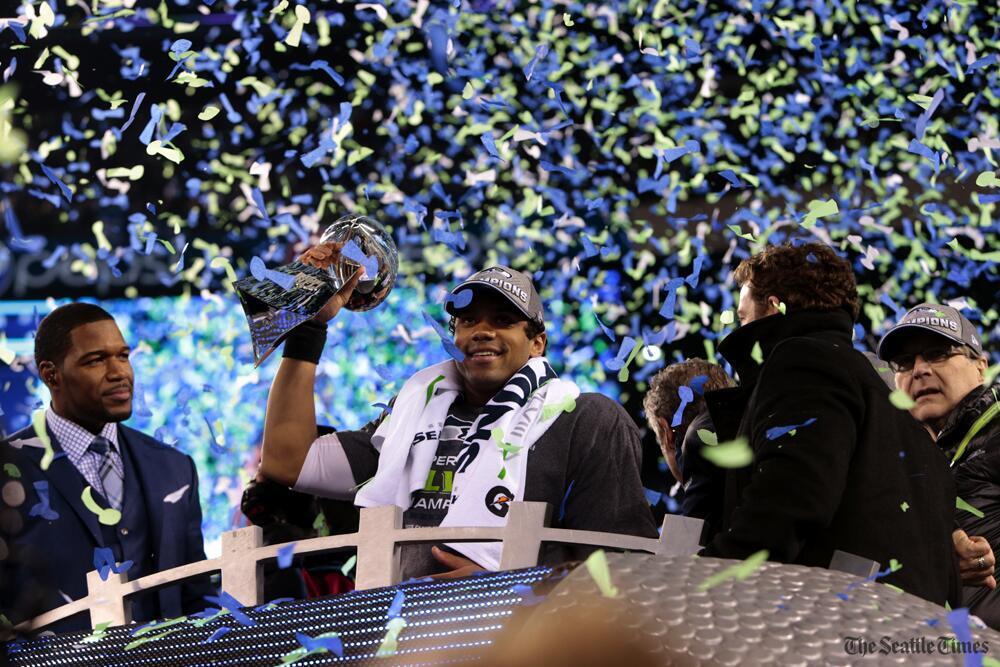 State Of The Position
Is he tall enough to play quarterback in the NFL? Yes

Can he sustain success after the NFL adjusts to his style of play? Yes

Is he more than a read-option sensation? Dumb question

Can he beat teams with elite quarterbacks? Yes

Does he have what it takes to win in the playoffs? Yes

Russell Wilson has answered just about every question. The ones he will face now will involve history. As in, can he become the best quarterback in the history of the game? That may sound hyperbolic, but it is an absolutely fair question to ask when a player is winning at his rate and playing at his efficiency level at such an early stage in his career. Should he finish with 3-4 Super Bowl rings, a win rate that rivals Peyton Manning and Tom Brady, and a career passer rating in the range of Aaron Rodgers, he will answer that question in the affirmative as well.

Consider that in the two biggest games of his young career, against the impenetrable 49ers defense and on the games biggest stage in the Super Bowl, he combined to complete 34 of 50 passes (68%) for 421 yards (8.4 avg per attempt), 3 touchdowns and 0 interceptions. That works out to a passer rating of 113.8.

He could have thrown for 300+ yards and 5+ touchdowns if the Seahawks needed him to against Denver. The moment was not too big for him. He was too big for the moment. That is your Seahawks quarterback for the next decade.

Wilson, for all the well-earned superlatives thrown his way, has room to improve. More room than most casual observers may realize. He still is too quick to bail out on plays that require him to go through his progressions. He improved on his ability to spread the ball around, but can get better still. He added the back shoulder throw this season, but it was only occasionally used. Throwing to backs out of the backfield is something he has a tough time with, often coming dangerously close to throwing backwards and other times struggling to lead the runner toward the line. That throw will become even more important with a healthy Percy Harvin in the future.

One of the least appreciated part of Wilson’s game has been his durability. He has yet to miss a game. That has made the back-up quarterback a cushy job. Tarvaris Jackson was ideal for it last year, and looked like a different level of confident player when he got chances to play. Many will consider it crazy, but the Seahawks could have won the Super Bowl versus the Broncos with Jackson at quarterback. The difference comes in a game like the one versus San Francisco. Wilson has that special ability to make an impossible play at the key moment that a defense cannot prepare for or defend. Some players have that innate ability, but lack the physical tools to realize it at the highest levels of their sport. Some have the physical gifts, but lack the special sauce. Wilson is a splendid combination of the two.

The team signed a young rookie quarterback, B.J. Daniels, who is 5’11” as well. Carroll always had two quarterbacks he was grooming during his time at USC, and the team will definitely be looking for at least one young quarterback to carry who can give the team options if Wilson were to go down for an extended period. Veteran back-ups are expensive, and usually have limited potential. An ideal situation for Seattle is to have a young player who they believe is starting caliber, and can earn a back-up role on a rookie contract by at least his second year. The trade market for back-up quarterbacks has cooled considerably, but the intense demand for signal callers, and the increased visibility of the Seahawks organization could make their young players more intriguing in future years. Consider the interest the Patriots get for a guy like Ryan Mallett.

Only the Tampa Bay Bucs spend less on their quarterbacks than the Seahawks.

Free Agents
Combing through veteran free agent quarterbacks is like digging your hands into the couch cushion looking for change. You may find a quarter, but more likely, you find food remains you wish you were not touching. I won’t subject you to it beyond the one that probably matters.


Tarvaris Jackson
Jackson should be re-signed. He fits with the program, and is perfect for what the team needs. He is more than a .500 quarterback with this team. If called upon, he could win 9-12 games as a starter, and even a game or two in the playoffs.

Draft
It could happen, but it would register as a big surprise. Adding another undrafted free agent seems likely to see if they can find a developmental player they like more than Daniels.

Bottom Line
The franchise is set at the most important position in the sport for the next decade. Wilson will continue to succeed. He will sign a big extension after next season. The real questions are about how high can he set the bar. An ironic question for a player so many believed did not measure up.