These are the weeks Twitter was made for. The avalanche of free agent news coming down across the league was captivating. Rumors and theories became confirmed reports and signed deals. Players re-signed. Players moved. Players agreed to terms, and then found themselves back on the street after the team got cold feet. Seattle has yet to add any new names to the roster, while a number of familiar faces have moved on. That has a few Seahawks fans squirming. This is a good time to take stock of where the Seahawks roster is still strong, and where it would be wise to augment it. We will start on the defensive side of the ball. 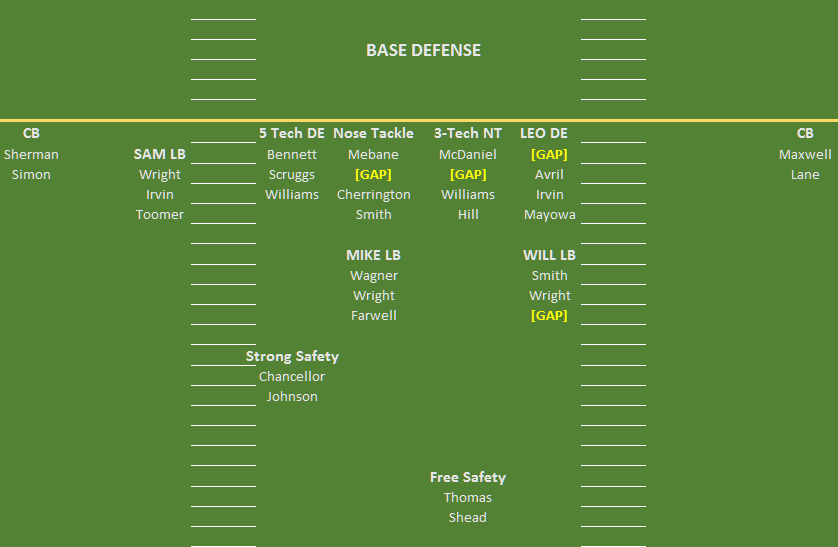 There is a lot to absorb in there, so let’s talk about the changes first. Bryant was the starting 5-Tech DE in the base defense. Nearly all of his value was as a run stopper. When he was on the field, teams had the opportunity to go no-huddle and catch Seattle in a situation where they could not get their optimal pass rush package on the field. This was enough of a concern versus Denver in the Super Bowl, that the Seahawks played their nickel package most of the game, and Bryant got very little playing time.
When Pete Carroll talks about getting Michael Bennett more playing time and the “evolution of the defense,” he is almost certainly looking at Bennett absorbing Bryant’s snaps in the base defense. He could easily add 150-200 snaps doing that, which would put his snap count at a level similar to where he was in Tampa the year prior when he was their starting defensive end. What does that mean for the Seahawks run defense? Bennett is one of the best run defenders at defensive end in all of football. He does it differently than Bryant, and will require some adjustments, but Bennett was near the top of the league in tackles for loss when with Tampa, and was the 3rd-best rated 4-3 DE end against the run by Pro Football Focus over the last three seasons.

The depth behind Bennett at that position is intriguing. Greg Scruggs may be the young player with the highest upside who many fans do not know. He weighs 315 lbs, and is a terrific athlete. We have not seen him play DE yet, but it makes sense that he will get a chance. If healthy, Jesse Williams would be another player to watch there. Some have mentioned Tony McDaniel there, but I don’t see it. They need him in the middle of the line.

The two base roles that remain to be addressed are the starting LEO and depth at nose tackle. Bruce Irvin, Benson Mayowa, Bennett, and Avril all may be options at LEO. None are ideal. Carroll likes to say that LEO and SAM are interchangeable in their scheme, but that the LEO rushes the passer more often. Irvin struggled mightily against the run in his rookie year when asked to play LEO, but was great against the run as a SAM LB. Maybe he has grown enough to try LEO again. That would be ideal. Avril clearly prefers to rush from the strongside against the tight end and right tackle, and is also a liability against the run compared to Clemons. Mayowa is still way too much of an unknown to go into the draft counting on him. If Scruggs shined brightly in camp, there is a chance he could become the starter at 5-Tech and shift Bennett over to starting LEO. Again, not enough information to feel comfortable betting on that if you are John Schneider.

That means signing a veteran LEO who is a known quantity remains a highly likely move in free agency. Names like Jared Allen, Will Smith, Shaun Phillips, and Anthony Spencer are still out there. So is O’Brien Schofield, who had his deal voided with the Giants after they didn’t like the way his knee looked in a physical.

McDonald was the backup to Mebane at NT in the base defense, and that rotation was key to keeping Mebane fresh late in the year. Cherrington is an intriguing prospect who showed promise in camp, and is a big boy at 330 lbs. The team can also find big body run stuffers in the draft and late in free agency. D’Anthony Smith played well against the run last season, but it is not clear he can be a nose tackle in this defense. He is better-suited to be a backup to McDaniel as a run-stopping 3-technique in the base defense.

If the team were to sign a guy like Henry Melton, he would not be part of the base defense. He would take over the Clinton McDonald role in the nickel. Let’s take a look at the nickel package, which is played more often than base in many cases with all the passing offenses in the league. 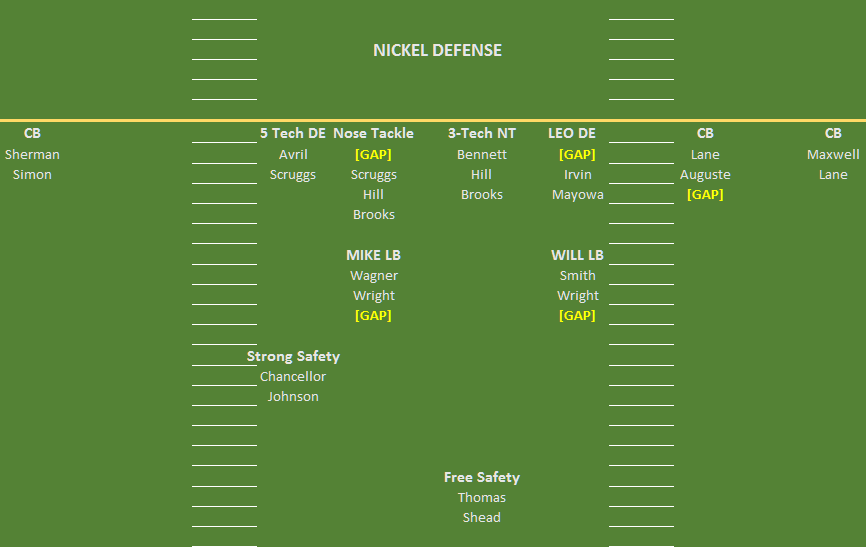 Much is the same with the nickel package as it was in 2013. Key pieces like Avril and Bennett are reunited. Great coverage and rush linebackers are still in place. Smith and Wright have different strengths in coverage, but both are terrific there. Wagner had 5 sacks without being a featured rusher. Chancellor and Thomas are back, as is Johnson, who was a play-maker as a third safety when he was healthy.

There are really three meaningful gaps in the nickel package. The LEO situation is roughly the same as in the base defense, but Irvin is a slightly better option as the run:pass ratio is slanted more heavily to pass in this defense, so his potential vulnerability against the run is less pronounced. The two more important items to consider are:

McDonald was both the back-up nose tackle in the base defense and the rush DT in the nickel. He was ideal because he was so stout against the run and became a good pass rusher. A guy like Melton would be a great addition there if healthy. Jason Hatcher, Vance Walker and others could have filled that role as well, which is why they received interest from the Seahawks.
Interior rushers are hard to find, so it is not out of the question that the Seahawks will strike out on finding a good match of performance-to-cost at that position, and need to hope one of Scruggs, Hill, Williams, or Brooks steps forward. Scruggs netted 2 sacks as a rookie doing interior rushing. It is not hard to imagine him matching McDonald’s output now that he he would be playing on a line with Avril and Bennett.
The nickel corner is one to watch. Lane played admirably during his time last year, but that is a very tough position. He would likely require more safety help. There have been a lot of good reports on Akeem Auguste for that role, but I have not seen enough to speak confidently about his potential.
This is why the team is still talking to Thurmond. Grabbing Thurmond would possibly have a bigger ripple effect on the defense than signing Melton simply because of the options behind him. Thurmond also can be a starter outside. It would surprise me to hear Thurmond chose to come back, knowing he could start outside somewhere else, but it would be huge if he did.

There are potential solutions for each of those roles already on the roster. Schneider will work diligently to reduce the risk that those options do not pan out. He will not, however, overspend to get it done.
If Jared Allen wants to come here, it will be for an amount the Seahawks want to spend at that position. Melton would be a terrific addition, but only if he wants to sign a deal similar to Bennett’s from last year that is affordable and short-term. Thurmond would be a luxury addition. Of all of these roles, the starting LEO is the one with the most question marks about who could fill it if no proven commodity is added.
Only one week into free agency, a full draft left to go, and the Seahawks defense is in very good shape. There could be some young guys who get the chance to shine, some marquee names who get a shot at a ring, or a combination of the two to fill the gaps. All is going according to plan so far.
Start typing to see results or hit ESC to close
real hawk talk softy russell wilson 49ers rams
See all results