Speed can be used in a variety of ways when you are a wide receiver in the NFL. It can allow you to run by a defender, or to scare a defender into a retreat, and gain separation on a shorter throw. Paul Richardson also used it in college to run away from defenders after hauling in the pass. That unique skill translated to an eye-popping 41.8 average yards per touchdown reception in college. Seattle is hoping to blend that trait into a unit that is already one of the most prolific big-play groups in the NFL.

It may shock you to know the Seahawks are already near the top of the NFL in creating big plays in the passing game. The national narrative about the Seahawks offense and their receivers does not mesh with reality.

Only the Philadelphia Eagles completed more 20+ yard passes as a percent of their total pass attempts than the Seahawks in 2013. Both Jermaine Kearse and Doug Baldwin averaged over 15.6 yards per reception. Only the Eagles averaged more yards per completion (8.7) than the Seahawks (8.4) during the season. Richardson has the chance to add a new element to an already efficient passing attack.

For all the big plays the Seahawks receivers produced last year, they are not well equipped to take a pass and run away from defenders all the way to the endzone. The closest play to that last season may have been Golden Tate’s 80-yard taunting touchdown in St. Louis, but his defender fell as he caught the ball. Luke Willson probably had the most pure run away touchdown in San Francisco.
A player like Tate is elite with his ball skills; the ability to compete for a ball in the air and snatch it away from a defender. Kearse has a similar gift he displayed on deep touchdown receptions versus Carolina, Atlanta and San Francisco. Baldwin creates separation and is quick enough to get behind the defense, but has only a couple instances of taking it all the way after the catch. 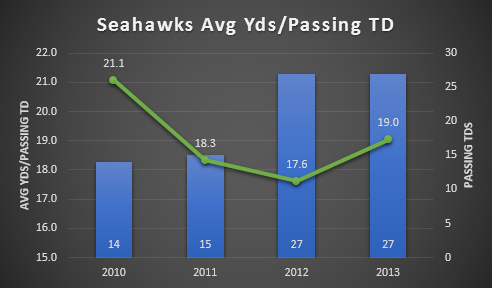 Russell Wilson and the Seahawks have dramatically increased their passing touchdown output in the last two seasons, but their average distance per touchdown pass is roughly middle-of-the-pack in the NFL. Their 19.0 average yards per touchdown reception last year was 14th in the NFL.

You can’t catch me

John Schneider and Pete Carroll are trying to impact that number by drafting a player like Richardson. A team that only passes the ball 25-27 times per game needs to get the most out of each throw. Richardson had a dizzying number of long touchdown catches in his college career. A full 50% of his touchdown receptions were 50+ yards. 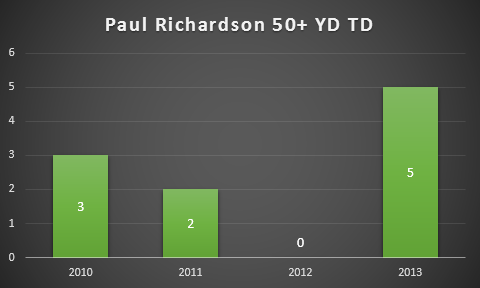 He missed the 2012 season with a knee injury, but was good for 10 touchdowns of at least 50 yards in three seasons. That bests what the Seahawks offense was able to produce as a whole during the same time frame, and he did not even play all four years. 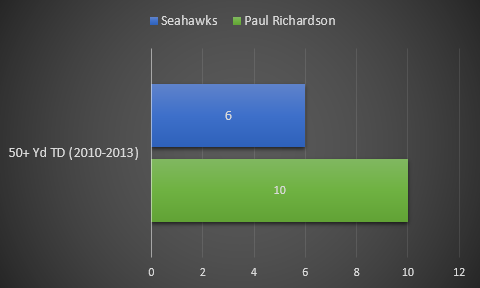 Guys like Richardson and Percy Harvin represent a chance to add a knockout punch to an already well-equipped group of passing pugilists. Harvin stretches the field laterally as well as any player in the NFL. Richardson will help to stretch it vertically. Luke Willson can help pressure the seams down the middle. As a defense strains to cover every blade of grass, wide spaces open up for other players to exploit. This is how you construct an offense that could well be feared as much as the Seahawks defense in the coming year.