Strength In Numbers: A Look At NFC West Draft Trends

Horizontal American Style Football in high contrast on black
John Schneider has nothing to prove. He has helped to take one of the worst rosters in the NFL and turn it into a Super Bowl winner in just four seasons. He has drafted Pro Bowl players in each of his first three drafts, with strong potential for a player like Christine Michael to make it four straight sometime down the road. His attention to the cap, roster management, scouring all sources of talent, and even his relationship with the players on the team is everything a fan could hope for. And yet, the Seahawks sit here, just two days from the draft, with only six picks. A team they beat by the slimmest of margins to earn a trip to New York will take five more players than the Seahawks at this point. The St. Louis Rams, who gave Seattle everything they could handle the last two seasons, will pick six more players than the Seahawks. As great as Schneider is, his odds of out-drafting teams with that much of a pick advantage are long. Take a look back at the number of draft choices for each of the current NFC West GMs over the last few years and their hit rate on those picks.

Pete Carroll joked in the Seahawks pre-draft press conference this afternoon that you judge a trapper by the pelts on his wall, referring to the team’s success with undrafted free agents. He is right. Schneider and Carroll have found an astounding 10 starting players (includes nickel corner, slot receiver and second tight end as starting positions) in rounds five and later (including undrafted free agents) since 2010. That is more than they have found in the first four rounds of the draft. 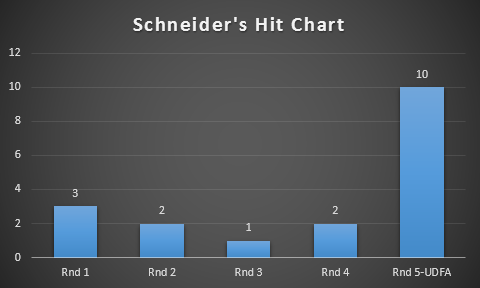 Schneider’s overall ability to find starting talent is strong. Most analysts will tell you that a draft cannot be judged until 2-3 years have passed. By any measure, Schneider hit it out of the park in year one, but the jury is definitely out on his most recent draft class. The following table shows the hit rate for each of the current GMs during their tenures. A hit is registered for a player that either is currently a starter with that team, another team, or has started a considerable number of games. These numbers are subject to change from year-to-year as the player’s careers advance.

Les Snead looks to be doing a nice job for the Rams so far, and the quality of the team on the field has clearly risen. Of course, it is easier for a GM to register a hit in their first year or two when taking over a team with little talent. Someone has to start. Still, a guy like Zac Stacy looks like he’s a safe bet to stick around for a while. Baalke has a brutal 2012 draft. None of the players taken that year appear to have starting in their future. LaMichael James might be the best player they added, and that speaks volumes. We will know more about the 2013 SF draft class starting this year when some of their injured rookies get a chance to take the field. But this is where total number of picks comes into play.

Assume for a second that Baalke and Schneider’s cumulative hit rate will hold true. A big assumption, but that is fine for this exercise. If Baalke hits on 25% of his upcoming 11 picks and Schneider hits on 38% of his upcoming 6 picks, the 49ers will end up with one more starter out of this draft than the Seahawks. Being a better personnel guy only gets you so far if your opponents have a decided pick advantage. This is the first year Schneider has found himself in this situation. 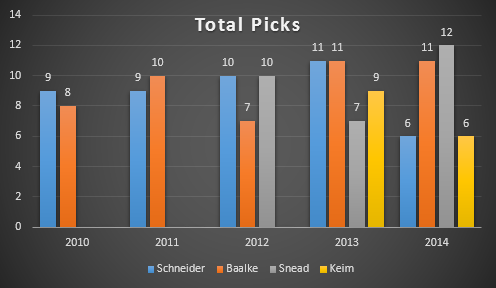 Seattle has actually averaged more picks (9.8) than San Francisco (9.0) from 2010-2013. The 49ers could have finished with even more picks last year if they had not used some to move up in the draft. That is another hidden cost of being at a pick disadvantage. If you see a player fall that you have a high grade on, extra picks can be the difference between nabbing that guy and watching him fall into the enemies hands. 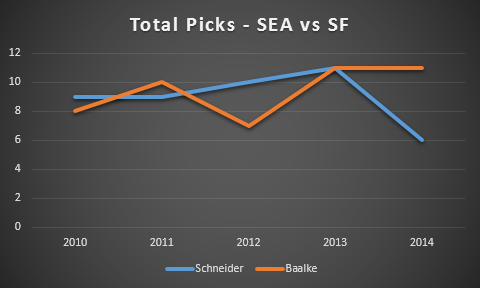 The two-year trend for the Seahawks and 49ers in total picks is not in Seattle’s favor.

Seattle also suffered last year from a heavy number of late picks, which meant their overall pick value was lower. The average of all their draft choices was 167, compared to 89 for the Rams. That means the Rams only had 7 picks to the Seahawks 11, but the Rams picks were far higher up the board, and theoretically should yield better results. 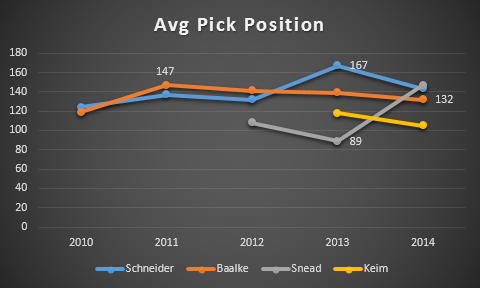 You might think that winning would hurt overall draft position, but check out the 49ers downward (upward?) trend the last four years. They are compiling lots of picks, and of a higher quality. There are not many things the 49ers are doing better than the Seahawks, but this is definitely one of them.

Schneider wants more picks. History has shown that. He will make every effort to trade down and acquire more picks. We may see players (Robert Turbin?) involved to free up space on certain parts of the roster. And as great as Schneider has been thus far, he needs to find a way to close the pick gap with other NFC West teams to keep the Seahawks on their perch. 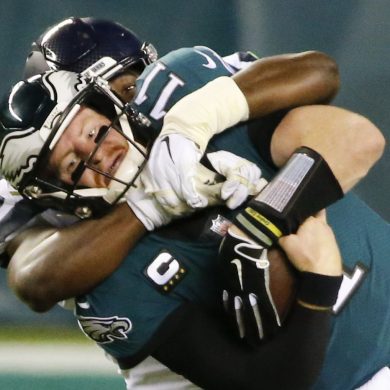