THIS WEEK
The Packers fall from the top spot after a few weeks in the driver’s seat. Seattle holds steady at #4 despite losing a bit of team strength this week due to a poor passer rating against the 49ers. There is still a large divide between the top three teams and then Seattle in the fourth spot.


The Seahawks offense, specifically the passing game, is keeping the team from climbing higher. The efficiency numbers are just above average, where the top teams all have elite passer ratings over 100. The Cardinals are a top ten team when strength of schedule (SOS) is factored in, but fall to #17 when it doesn’t. They are strikingly similar to the 49ers who are #11 with SOS and #19 without. The Cardinals have scored a few more points, but are otherwise alike.

Buffalo validated their spot in the top ten of the rankings the past few weeks with their win over the Packers. 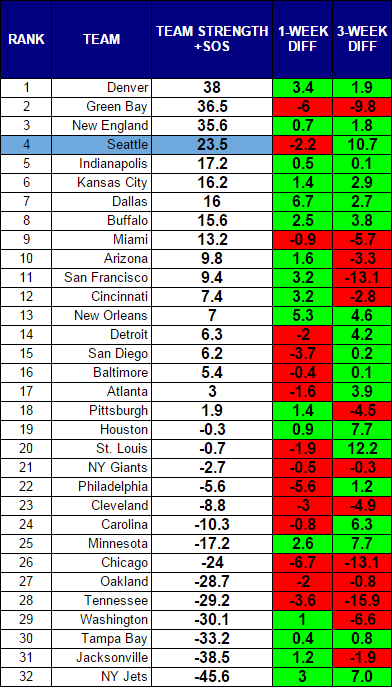