It can’t be done. Super Bowl winners always fail the next year. Forget the fact that it has been nine years since a past champion managed to win a playoff game. Three of the past five winners before Seattle did not even make the playoffs the next year. But this Seahawks team rarely walks the road well traveled. You will hear plenty of discussion about how winning it all last year means Seattle will not do it this year. This article will arm you with the facts, and they are far more promising than people outside of Seattle would have you believe.

The Super Bowl has been played since 1967, but the NFL and AFL only merged in 1970. That meant that it is not really possible to track things like seedings and conference championship appearances before that merger season. For the purposes of this article, we will consider the 44 teams that won a Super Bowl and then had a chance to earn a spot in the merged NFL playoffs the year after. We will not look at the 2013 Seahawks for the time being since their follow-on season in still in progress.
The rest of the research shared below focuses on how teams that won a Super Bowl did one year later.

The path is treacherous

We have heard a lot about this nine-year streak of Super Bowl winners going winless in the playoffs the next season. It is true that winning a playoff game following a championship is tough. Only 45% of the 44 champions were able to do it. And only two different franchises have done it since 1998. The Patriots last did it in 2005 when they won versus Jacksonville. They also did it the previous year when they became the last team to repeat as champions. The 2001 Baltimore Ravens were the only other team to do it in this century.
Nearly 30% of Super Bowl winners do not even make the playoffs the next season. Only 16% find a way to repeat, but seven of the ten teams to make it back to the Super Bowl the following year, wound up winning it again. 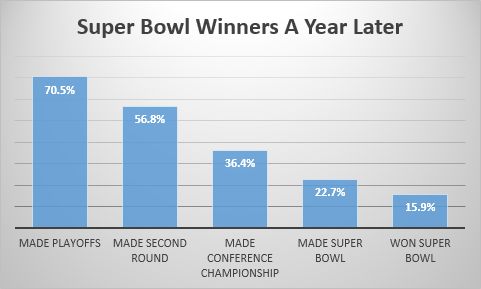 Getting to the Super Bowl has a lot to do with how difficult the road is to get there.

Seattle became just the tenth team to win a Super Bowl and follow it up with a #1 seed the following year. The nine previous teams that managed that feat had far better results than the ones who did not. 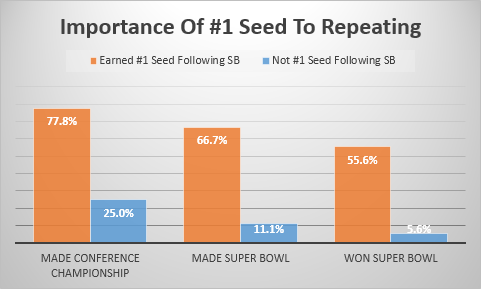 Almost 80% of the teams that got the #1 seed a year after winning the Super Bowl made the conference championship. Two-thirds made it to the Super Bowl again. And over half won it a second time. In fact, only two teams that repeated managed to do it without the top seed. The 2004 Patriots were the last to do it.

The last two teams to get a top seed after winning the Super Bowl failed to win a single game. The 2011 Packers went 15-1 and lost to the Giants. The 2008 Giants lost to their bitter division rivals in the Eagles.
The path to repeating is far smoother for Seattle after their win today, but they will need to continue bucking recent historical trends to raise another trophy.