Pete Carroll brought a lot of things with him to Seattle. He had a couple of college championships, a reputation as a master recruiter, and lingering questions about just how much of his recent success was attributable to coaching versus player talent. Among his many mentors, Bill Walsh stands out as a man who changed the face of the NFL with an innovative approach to high percentage passing that has reverberated through the league for three decades. Carroll has a chance to cement his legacy in football as a coaching legend by defeating many of the trends Walsh started.

Walsh entered the NFL as head coach of the San Francisco 49ers in 1979 after success at Stanford University. The league was dominated by defense and running. The Steel Curtain Pittsburgh Steelers were the team of the decade. Walsh was lucky enough to have Joe Montana drafted when he arrived and the two took the league by storm in 1980. The two led San Francisco to the franchise’s first Super Bowl title in their third season, and would go on to do it again in 1984 and 1988 before Walsh retired from the NFL. His influence, however, was felt both through coaches who followed his system and a league that continued to shift more toward offense and passing. 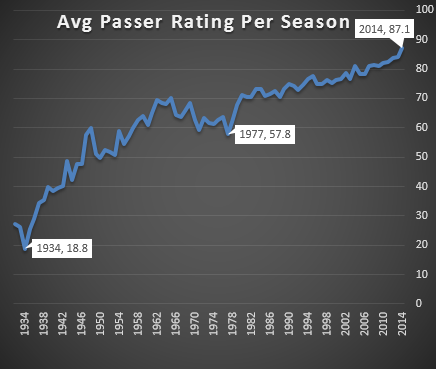 Passing efficiency skyrocketed almost immediately after Walsh entered the league. His offense was designed to reduce risk when passing the football by getting the ball out of the quarterbacks hands quickly and for shorter distances that allowed receivers to run more after the catch. This increased completion rates, yardage (due to increased volume of passes), passing touchdowns, and reduced the potential for interceptions. The trend toward more efficient passing has continued to increase.

The league set another record this year for average passer rating at 87.1

This is clearly not only about Walsh and his West Coast Offense. Rule changes and points of emphasis have continued to encourage more passing and higher scoring. 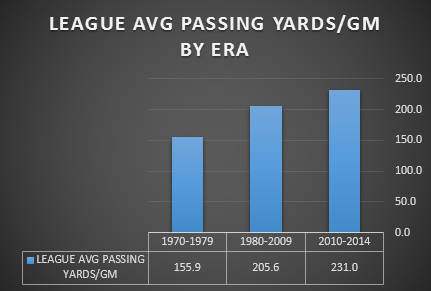 From 1980-2009, the NFL average was pretty stable in terms of total passing yards per team per game. It was a considerable jump from the 70s. Passing yardage has taken another leap forward this decade with the help of mega-passers like Drew Brees, Peyton Manning, Tom Brady, and Aaron Rodgers. 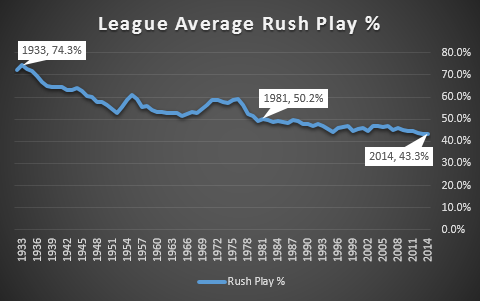 It became tribal knowledge that teams that wanted to win a championship needed an elite quarterback. These heavy passing offenses needed an expert operator. The transformation from a rough-and-tumble running league to a high flying passing league was almost complete.

Carroll joined the Seahawks in 2010, taking over one of the least talented and least physical rosters in the league. The team had just used a rare top five draft choice on LB Aaron Curry, so there was no Montana to build around when Carroll arrived. But Carroll would never start his building on offense anyway. Instead, he and General Manager John Schneider used one of their first round picks on a safety named Earl Thomas who possessed rare skills that fit perfectly at the core of Carroll’s defensive system.
Where Walsh made life easier on the quarterback for passing, Carroll’s defense was designed to make life easier on the cornerbacks who were tasked with defending those passes. He relied on the speed of a player like Thomas to patrol the entire middle of the field, thereby reducing and focusing the responsibilities of the cornerbacks.
Corners were among the NFL’s highest paid positions, and finding great ones was almost as hard as finding great quarterbacks. Carroll wanted a specific type of corner that fit his defense perfectly, but was less desirable around the league. These tall and angular players were often less equipped to move laterally and chase receivers across the field, but were trained to disrupt timing and defend deep passes and the increasingly common larger receivers. It worked. 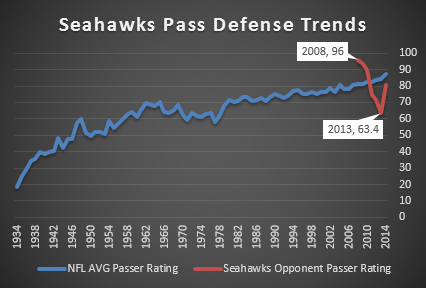 The Seahawks pass defense became the best in the NFL within a couple of years. It could be argued that it reached that point in just Carroll’s second season when Richard Sherman joined the lineup part of the way into his rookie season to team with Brandon Browner at corner in 2011. Opponent passing efficiency dipped from 89.7 in Carroll’s first year to 74.8 and then 71.8 and then 63.4 in what became the franchise’s first Super Bowl victory in 2013.

The 2014 squad struggled to begin the season in defending the pass, but finished the year disrupting the passer at an equal or better clip than any previous Seahawks team. Their cumulative opponent passer rating lept to 80.4, but it had been hovering around 100.0 through five games. 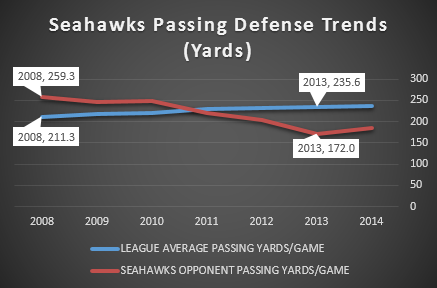 The decreased efficiency led to fewer passing yards while the league continued to climb to record numbers. Offenses averaged a whopping 236.8 yards per game passing in 2014 while the Seahawks defense, even with their early struggles, allowed just 185.6. Seattle was the only team to allow less than 200 yards per game through the air. Other teams have taken notice of the Seahawks system, but have been unable to replicate it thus far. Part of the missing element may be on the offensive side of the ball. 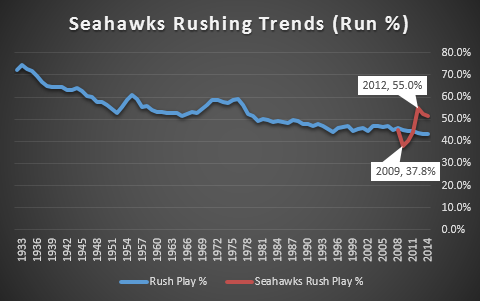 NFL offenses continue to revolve around the pass, but Carroll has combined his dominant pass defense with a trend-bucking commitment to the ground game. A record low 43.3% of all offensive plays in 2014 were running plays. Seattle rushed over 51% of the time for the third straight season. The Dallas Cowboys may have taken note of this as they had one of history’s largest flips from passing-to-running this year and enjoyed a similar flip in the outcome of their games.

Carroll’s formula of elite pass defense combined with an unbending commitment to the run on offense could become the system every team looks to copy should the Seahawks win another ring as they are favored to do. The lack of copycats so far means Seattle has a leg up for at least another year or two as other franchises would need to shift their draft strategy along with their offensive and defensive schemes.
What remains to be seen is whether the league will allow such a shift to occur. It generally would result in fewer points and move the emphasis back to strong defense and pounding runs that do not play as well on highlight films. The league office took a somewhat unprecedented step of emphasizing rules to combat the way the champion Seahawks played. Seattle was still able to play dominant defense, and the overall league averages continued to go toward video game numbers. It still bears watching should more teams start to follow Carroll’s lead.
Until that time, Carroll will have at least proven that passing and offense is not the only way to win a Super Bowl in this era. The potential remains for him to have similar impact to his mentor in Walsh and spawn a whole new age of how to build teams and win football games.