Is it too early to start talking about the 53-man roster cutdown? Of course it is. That won’t stop us from diving in and getting a lay of the land to see just how this thing could shake out. Trying to predict the backend of the roster is tough even the day before cutdowns as the team also factors in possible players available from other squads, and even a trade now and then (see Marcus Burley). Let’s give it a shot.

Looking back at the decisions John Schneider and Pete Carroll have made in the past is always helpful. The table below shows what they kept last year for each position, as well as the average for each position since they arrived. 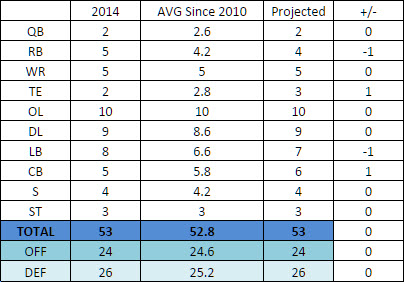 There is no way the team is going to exit with two tight ends this go around. That means they will need a roster spot from another group, and the obvious one is running back where the team has generally taken four guys with them.
Defense could come off the same as it did last year, but some of the questions at corner have me thinking the team will keep an extra on hand. Cutting Burley or Tye Smith would be tough. The team could choose to keep five safeties instead, knowing that Shead can play corner in a pinch, and the talent level is better at safety so far.

The following chart is a rough stack-ranking of every player at every position group. There are 34 players I have listed as locks. There are another 10 that are listed as “high confidence” to make the roster. That leaves nine spots for the rest.
Notice that Earl Thomas and Tharold Simon are being counted. It may be optimistic, but I cannot face the thought of Thomas going on PUP. Simon is supposed to be back, so that is less of a reach.

It is easy to pick on all sorts of things as soon as you look at it. Heck, I am arguing with myself as I write this. Is Kevin Norwood really “high confidence?” Tarvaris Jackson should probably be listed as a lock.

I expect a guy like Thomas Rawls to be a practice squad candidate. If Douglas McNeil or Kevin Smith show out during camp, they could unseat Norwood. Kearse could still be at risk, but that is less likely as someone like Chris Matthews or Tyler Lockett would have to leapfrog Kearse on the depth chart.

Tight end is going to be tough. Cooper Helfet could absolutely beat out McCoy. Offensive line is going to be a tough cut. It would not shock me if Lemuel Jeanpierre goes from presumptive starter to cut. If Nowak is promising enough, they could keep Patrick Lewis at G/C and possibly Kristjan Sokoli at G/C, and roll the dice that the young guys will be able to do the job. Jeanpierre was not signed by other teams all of last year, so he might be someone they could sign back later if needed.

There are plenty of good defensive lineman. My guess is Greg Scruggs and D’Anthony Smith make the squad, and they try to stash a few on the practice squad.

Mike Morgan may ride again at linebacker. He’s excellent on special teams, and it is not clear that Tyrell Adams or Eric Pinkins are both playing well enough to push him off the roster. Both have time to change that equation. The better bet is one of them will make it, and it will probably be the one who plays better on special teams.

I have the team keeping an extra corner this year. Mohammed Seisay is almost a sure thing without having seen him, given the team traded to acquire him. My best bet would be Burley and Will Blackmon make the squad and Smith is a practice squad candidate.

The fourth safety has to be the most competitive spot on the roster. Anyone from the list of: Dion Bailey, Keenan Lambert, Ronald Martin, Steven Terrell, or Ryan Murphy could seize it. I like Bailey, but this will come down to the wire. The team could easily decide to keep five here and cut Burley or Blackmon at corner.