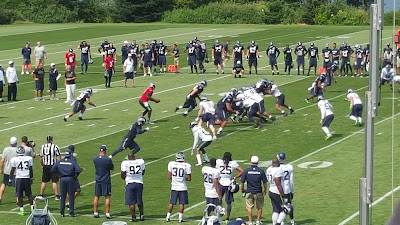 With the first preseason game only 11 days away, training camp is starting to get interesting at the VMAC. Players are putting ink to paper as they sign new contracts, and then putting pads on shoulders as they take the field. Wily veterans field questions from reporters they know well by now. Star-crossed undrafted free agents sit behind the camera with stars in their eyes. Fans watch anxiously with guarded optimism.

While there’s already a lot to be pumped and jacked about this season, there’s also still a lot we don’t know about the 2015 Seahawks. But like they say in the film room, the tape doesn’t lie. After watching training camp on a muggy Sunday morning, I saw some things that surprised me, and some things I expected.

1. Christine Michael had a bad day.


I’m not going to read too much into this and start saying C-Mike is on the roster bubble, but what I saw Sunday wasn’t good. He muffed a ball on a kickoff return, and then dropped a wide-open screen pass during 11-on-11s later.

Not a single player on this team is going to be perfect every day, but the mistakes call into question the bigger picture with Michael. He’s got explosive playmaking ability with excellent speed, but mental mistakes have eaten into his snaps more than they should. While the Seahawks have not drafted a running back since taking him in the second round in 2013, UDFA Thomas Rawls is showing enough so far to get noticed. If Rawls is the real deal, and Michael isn’t able to make a case for more playing time, it’s difficult to imagine Pete Carroll giving Michael yet another chance on the final 53. Always compete.

2. Douglas McNeil could be this year’s Doug Baldwin.


A few things have drawn more attention to the Seattle passing game this offseason; primarily the signing of Jimmy Graham, and the out-of-nowhere MVP-caliber performance by Chris Matthews in the Super Bowl. Will Matthews emerge as the other big-bodied receiver Seattle loves to feature in its offense? Jimmy’s presence is already being felt, and I’ll get to that. And though he could very well secure a roster spot, Matthews wasn’t featured much in Sunday’s practice, but another guy was: Douglas McNeil.

The guy was simply all over the place. He beat Sherman on a deep ball downfield in 11-on-11s, and beat Cary Williams on another. He has the size (6’3″, 200 lbs) to win one-on-one matchups in press coverage, and shows absolutely zero fear of jumping up to haul in tough throws. Watch the catch on the play starting at 00:46:

That’s a catch he made during his time with the Arena Football League’s Portland Thunder. Leave it to John Schneider to comb every inch of planet Earth to find guys like this. Side note: Did you know there was still an Arena Football League? And there’s a team from Portland in it? Why didn’t I know any of this? The score of 62-54 in the fourth quarter makes me wonder why I haven’t been watching this sport every night of the NFL offseason. C’mon, AFL! Marketing!

But this is part of why I love going to training camp — there’s always a guy who seems to materialize out of thin air and wow everyone early on. I seem to recall another receiver named Doug doing the same thing a few years ago, and that’s worked out pretty well for us. Could McNeil be the next one to carry that torch?

During the first hour of practice, Jimmy Graham lined up outside across from Cary Williams in a three-receiver set. Immediately I keyed in on that matchup, expecting Graham to get the ball. When Graham motioned inside before the snap, Wilson handed the ball off to Thomas Rawls, and Graham plowed into the defensive line, delivering a punishing block. Rawls didn’t gain more than three or four yards on the play, but I was too busy watching 320-pound defensive linemen on the best team in football seem to bounce off the 6’7″ tight end. Brutal.

This is good news, especially given the question-mark status of an offensive line missing its longtime anchor this year in Max Unger. Though Graham might’ve been featured mostly as a receiver in New Orleans, training camp has so far shown his versatility and strength beyond pass-catching. He said it best when asked: “I’m 6-foot-7 and 270 pounds. I can block whoever I want.” Yes. Yes he can.


Just after practice ended yesterday, the Seahawks announced the acquisition of someone named Mohammed Seisay, a cornerback from the Lions. Schneider gave up an undisclosed (read: late-round) draft pick to get him. He’s 6’2″, 206 pounds, and played in 13 games for Detroit last year. He didn’t do much, only notching five tackles, but you know the drill with DBs and the Seahawks by now: They’ll groom potential if you fit the mold.

With his size, Seisay fits the mold. Between this coaching staff and the best corner in the game as an on-field coach, the team must believe it can get the best out of their newest guy. But it also says CB depth is a real concern right now. Jeremy Lane is probably still starting the year on the PUP list at best. Byron Maxwell is an Eagle. Cary Williams is unproven in this system. The same goes for other guys like rookie Tye Smith. Why not roll the dice with another big-bodied veteran to back up the LOB? We’ll be seeing a lot of Seisay during the preseason.

5. This pass rush is going to eat quarterbacks.


After Cassius Marsh went down with a foot injury and missed most of last year, I was disappointed. It’s often hard to gauge what you’ve got with rookies anywhere on the field, but Marsh had flashes of brilliance in what little action he saw.

Now that he’s healthy and returning to a pair of mentors in Michael Bennett and Cliff Avril, I’m expecting Marsh to come back with a vengeance in 2015. He was crushing people in pass rush drills and giving offensive linemen all they could handle everywhere else. Pair that with Frank Clark’s potential, Brandon Mebane coming back healthy, and Jordan Hill continuing his development as Mebane’s heir apparent, opposing quarterbacks are going to get hit. A lot.

Oh, and there’s this guy, who’s now a Seahawk for the next four years. He can do some stuff, too. 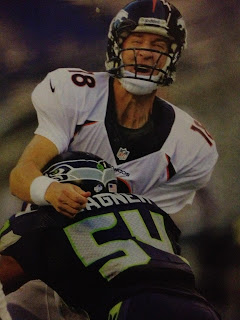