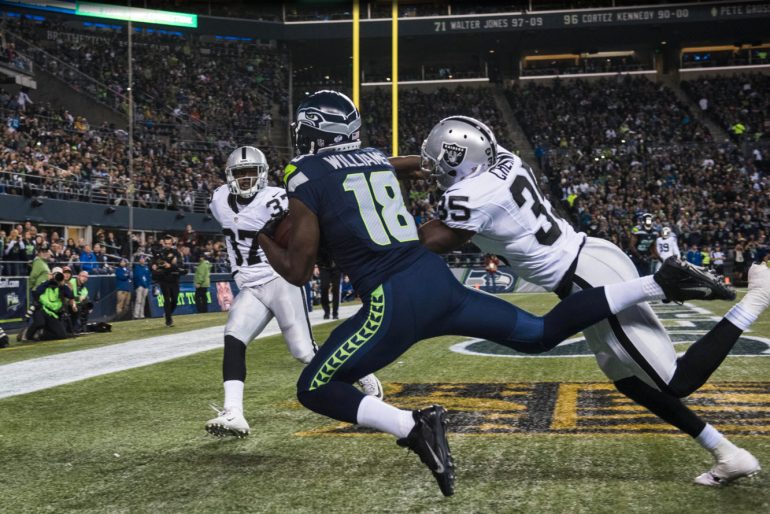 10 Young Seahawks Who Could Shape the Offseason

The NFL offseason is most fun when talking about big names and big decisions. The most important moments, however, often happen with much less fanfare. Marshawn Lynch, Russell Okung, Bruce Irvin and other frontline Seahawks demand headlines, but their futures, along with other key free agent decisions, will be heavily influenced by young players far fewer people will be discussing.

At 6’3″ 217 lbs, Kasen Williams is the prototypical size for a receiver. He is not the fastest player, clocking in at just 4.6 seconds in his 40-yard dash before the draft, but he is a terrific athlete who adds a 35-inch vertical leap to his already tall frame. He showed great potential as a special teams player during training camp, both as a gunner on punts and as a kick or punt block specialist on the edge. After spending the bulk of the season on the practice squad, he was promoted late in the year, and appeared in a couple of games. He could be a perfect fit at split end, and will be under club control for years to come.

Williams fellow Husky, Kevin Smith, is shorter (6’0″), but is a more polished NFL receiver. He is the quintessential Seahawk, battling his way onto the roster from total obscurity. He has been among the most productive players in the past two training camps, and continued that trend during practices this year, earning the nickname ‘One-a-day’ because he caught a touchdown every practice. He can play all three receiver positions, which is something that helped Jermaine Kearse cement a roster spot. He should enter camp next year as the leading candidate to grab the third receiver spot. As well as Kearse has played, it would seem unwise to spend free agent dollars on a receiver when there are two promising young players ready to step forward.

It had been a foregone conclusion that Bruce Irvin was going to be allowed to walk in free agency after the Seahawks declined to pick up his 2016 option. Part of that calculus was the expected progression of second year linebacker Kevin Pierre-Louis. That growth never came. Pierre-Louis got a chance to start earlier this year with Bobby Wagner was injured, and the coaches apparently were not happy with what they saw because Pierre-Louis barely played the rest of the year, even when other linebackers were hurt. The thought was that K.J. Wright would slide back to Irvin’s SAM linebacker role and Pierre-Louis would take over at WILL. That seems like a stretch at this point. The team can draft there, but don’t be surprised if they make a bigger push to keep Irvin around than previously expected.

Gilliam was a starter at right tackle all year, and had some predictable growing pains. It was his first year starting, and his first time playing right tackle. The team had been grooming him at left tackle. He has the athleticism to play the position. One of the most pivotal offseason assessments for the Seahawks will be whether they are ready to bet on Gilliam at left tackle. Russell Okung figures to be expensive, and the team may want to apply that money elsewhere (e.g., J.R. Sweezy or other guards). Do not be surprised if they lean forward with Gilliam. His work ethic and skill set makes him a good bet to steadily improve. This would leave right tackle an open spot again, which the team would likely try to address via the draft.

Forgotten due to total inability to remain healthy, Tharold Simon is a more talented corner than anyone who played opposite Richard Sherman this year. He has Pro Bowl potential, with elite athleticism and size, but has been hurt far too often. He missed this year with a dislocated toe that required surgery. Many Seahawks fans have written him off, as they did Walter Thurmond III. That is foolish. If healthy, Simon is a key addition to the Seahawks secondary. He will have real competition from Deshawn Shead, who the team almost certainly will retain, and possibly from Tye Smith.

It is hard to say how much of the improvement on the offensive line was directly attributable to the insertion of Patrick Lewis into the starting lineup. He certainly was an improvement. The question facing the Seahawks is whether they believe Lewis, a restricted free agent, is their starter or whether they want to upgrade that position. The team knows they can win with him at center, so expect them to try and address less reliable spots first.

As a former second round pick, Christine Michael has the pedigree to be a no-brainer part of the Seahawks backfield plans for 2016. The problem has been his propensity for being a more literal no-brainer since he has been drafted. Michael, a restricted free agent, demonstrated a newfound focus and attention to detail in his return to the team, but it will take a lot of offseason work to convince the team he has left the bad stuff in the past. Expect the team to spend a draft pick on a running back, possibly a high one.

Hill had a disappointing 2016 season that saw him battle injury and cease to be a factor in the pass rush after what appeared to be a breakout 2015 season. The most encouraging aspect of his play this year was improved run defense and his first stint at nose tackle in place of Brandon Mebane. The team has some crucial decisions to make along the interior defensive line and their assessment of Hill will be pivotal. Counting on him to become a starter at either nose tackle or 3-technique seems like a big leap.

Glowinski got a start late in the year and performed well. Well enough that the front office will be tempted to save money at the guard spot on a guy like Sweezy. However, the team could decide to bring Sweezy back, and move Glowinski to left guard. That would either move Justin Britt back to right tackle or possibly to the bench, or even center. Glowinski seems like a player on the rise, and one who could help this offensive line.

McCray played in a number of games while Kam Chancellor was injured, and the defense was able to perform well. Chancellor did not do a lot to help his case for a raise with an up-and-down season, and ironically, his holdout may have brought about his replacement. The Seahawks would have never traded for McCray if Chancellor was around and would have no viable replacement without him. Don’t count Chancellor out yet. He is an All-Pro defender when healthy and motivated. The team needs to be very mindful of this decision. 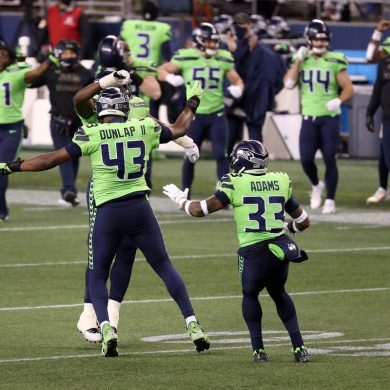