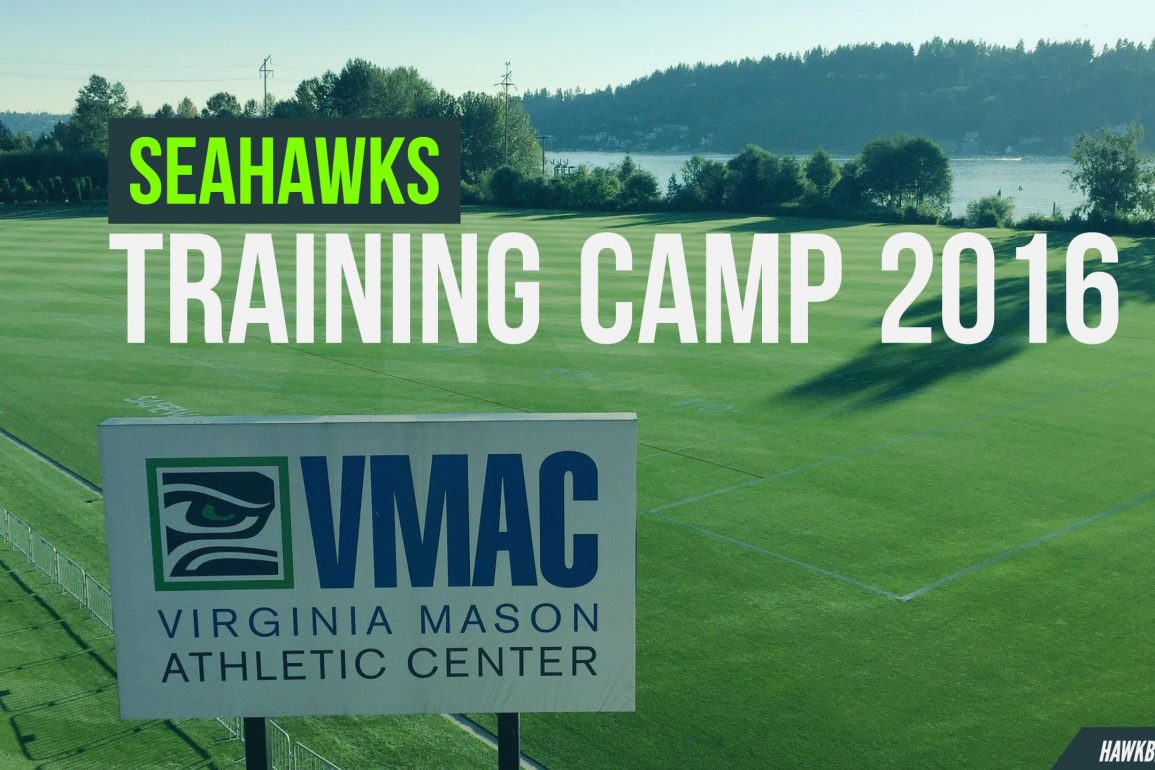 The Boom is back

I was struck by how different practice felt just with the return of Earl Thomas, Kam Chancellor, and Brandon Browner. Thomas and Chancellor missed all of training camp last year. Browner has been gone for two years. Seeing those three together again, along with Richard Sherman, brings a swagger that is unique to that quartet. I realize Browner will not be a starter, and may not even make the team, but I hope he does.

It was more than just seeing Chancellor on the field. He was engaging with the crowd in ways he never did in previous years, even before his holdout. He pointed to the crowd early in practice, and they responded with loud cheers. He did it again a short time later. The message was clear: I’m back. I’m sorry. We cool? None of that means he is headed for a monster season. Nonetheless, it was a welcome sight.

Brandin Bryant getting time with the second string

I was prepared to see this undrafted, unheralded free agent defensive tackle buried in the depth chart. His measureables are ridiculous. That does not always translate into performance the coaches crave. Well, he started training camp as the second string 3-technique defensive tackle behind Ahtyba Rubin. That is a strong signal that the coaches and front office are pleased with what they have seen of him so far. He has an interesting body type (you can see pictures of him in the photo section below). It reminds me a bit of Darnell Dockett, but not quite as big. He moves well, and looks strong. Seeing him pads and in pass rush and run stuff drills will tell us much more. For now, this is worth being a little excited about.

Jarran Reed is not the starter…yet

Everyone assumed Reed (who is now wearing #90) would walk right in and start at nose tackle in place of departed Brandon Mebane. Not so fast. Jordan Hill got the reps as the starter throughout practice. Sealver Siliga, a former starter for the Patriots, sat out practice with an injury. We will not know where this depth chart really shakes out until Siliga returns and we get further into camp. Should Hill win the starting job at NT, one has to wonder if Siliga will make the team. It seems unlikely they would keep three NTs on the roster.

DeShawn Shead ahead of Tharold Simon

We all knew that Jeremy Lane would slide inside to slot cornerback in nickel situations. What we did not know is who would take the edge corner spot opposite Sherman. Simon was considered a contender for that position. Shead starts camp as the starter there. Simon was playing with the second string. Shead played that role the second half of last season and did well. Simon has the greater upside, but the team will not hand him that role. He needs to stay healthy and win it.

Michael Bennett reports and seemed like his old self

He did not come out to the field with his teammates, but Bennett eventually showed up and took part in the majority of drills. He danced and cupped his ear to the crowd at different points looking the same lovable goofball that Seahawks fans have come to adore.

The team stayed in this formation the majority of the time. I would not put too much stock into the flanker versus split end versus slot positions just yet. I know I got the first three and second three right, but am not sure what role they were playing. 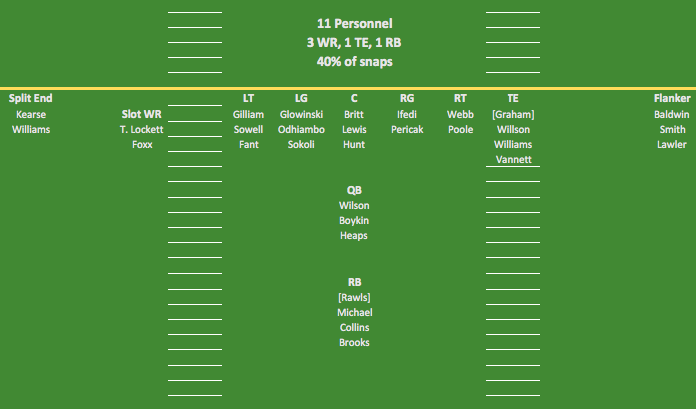 Both Brandon Cottom and Tre Madden got a lot of run at fullback. Cottom got the bulk of the snaps. 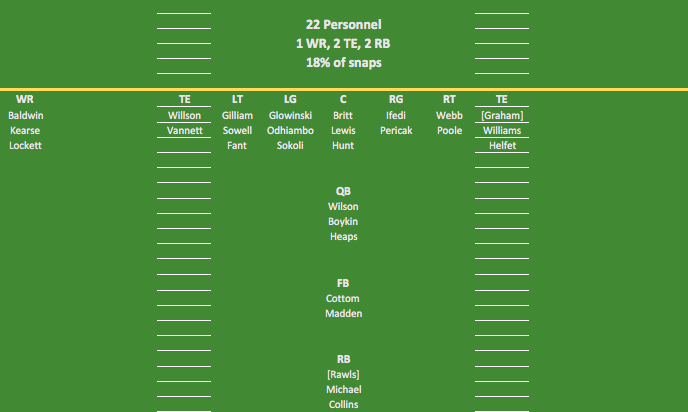 I never got a good look at the cornerback pairing of this defense. They had three corners on a lot. 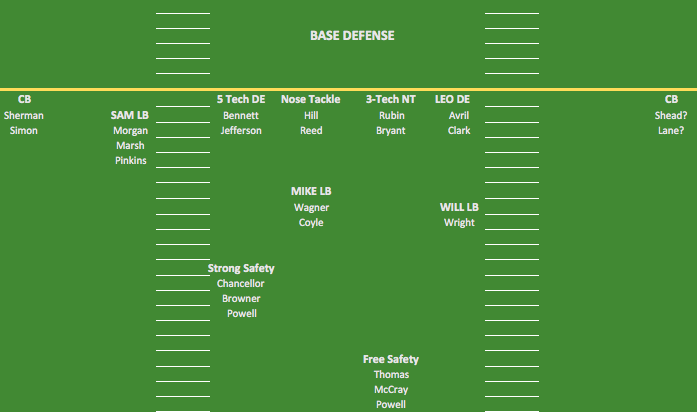 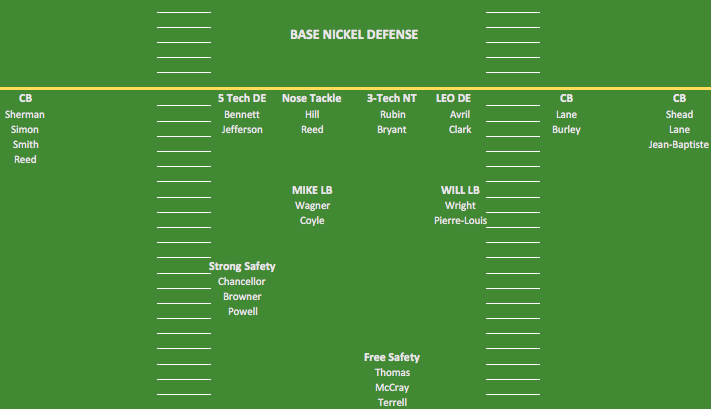 This is critical for a lot of the guys trying to make the back end of the roster. I’m 90% sure I got these first two groups correct. I was not able to get the third string, and I’m not sure it really matters. There were a few things of note here. Eric Pinkins was running with the first string. Said another way, Pinkins is a special teams starter. That definitely helps his chances. Every other first string player listed below is almost certainly going to make this team.

Kasen Williams was ahead of Kevin Smith. Williams was with the second string. Smith with the third. That could be a factor in the receiver battle. Paul Richardson was also in the second string, as was Douglas McNeil. Smith will need to show he can contribute somewhere on special teams outside of returns to earn a spot. Tyvis Powell flashed some nice speed running down the field. 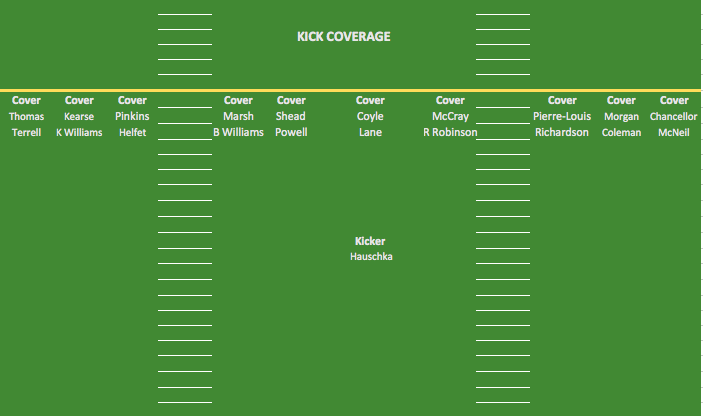 It was hard to figure out exactly where Williams sat on the depth chart. Partially, because I was having trouble believing he was ahead of Nick Vannett. My best guess is there were different formations and personnel groups that were dictating which guy was in. Either way, Williams got a lot of run and had a very nice practice. He has good size and appears to be a natural catcher.

Richardson did not have a dominant practice, but there were two things about it that stood out. First, he was on the field, and clearly happy about it. Second, his one catch came on a 40 yard bomb from Russell Wilson down the left sideline which he caught while running in stride. This is exactly the type of throw I want to see Wilson make. Richardson is not the physical jump ball receiver that Golden Tate or Chris Matthews were. Those are the guys we know Wilson can connect with. Richardson is a run-under-the-ball type of deep threat. Timing is more difficult on those. Wilson threw this one perfectly, and Richardson accelerated away from George Farmer to catch it and go in for the score.

Marsh was running with the second string linebackers at the SAM spot. He only practiced with the linebackers all morning. He moved naturally and had at least one nice play where he set the edge on a run and forced it back inside. I saw one play in coverage of Cooper Helfet, and he looked comfortable in space. His conversion to linebacker may just work. I will be looking to see if he challenges Mike Morgan as he gains more experience later in camp.

Fant was playing second string left tackle today because Gilliam was sidelined and Bradley Sowell moved up to play with the first string. I liked Fant’s build and movement. He looks strong and agile. I can see why the team is intrigued. I’m eager to see him in 1v1 pass rush drills when the pads come on.

Brooks took advantage of Prosise sitting out. He got plenty of reps and made a number of catches. I get the feeling the staff likes this kid. Nothing he did wowed me, but he drew my eye every time. There is a little Maurice Morris to him.

The catch of the day belonged to Foxx. He was a guy who I liked a lot last training camp, and the team did as well. They signed him to the practice squad and brought him back this year despite a total lack of openings. Still, Foxx showed why. On a play when the defense jumped offsides and QB Jake Heaps threw it deep, Foxx fought through coverage to come down with the ball and take it to the house. His teammates ran down the field to congratulate him.

Another one-play wonder was Robinson. He flashed around the edge on one pass rush and would have had a clear sack if it was a game. Super quick off the ball and cornered well.

Browner was partners with Kelcie McCray at safety all morning. He had a near interception in 7v7 drills, and looked like a natural.

There was not a lot to say about the offensive line because there is not much to learn on days without pads. They seemed decent. The second string, particularly Terry Poole, seemed to struggle a bit more. Both Justin Britt and Patrick Lewis had at least one bad snap each.

Wilson was not quite as dominant as we had heard. He had a couple passes batted down, and had two miscommunications with Doug Baldwin that caused both players to come together and talk about what went wrong after the play was over. There was nothing concerning. He still had plenty of beautiful throws.

Before I even saw his number, I noticed Prosise running to join drills. I grabbed my roster to see who it was because his gait was so unique. The guy is truly a glider. Let’s hope we get to see him on the field outside of warm-ups soon.

The next practice is tomorrow, which I will miss. You can look for my next set of notes Monday.