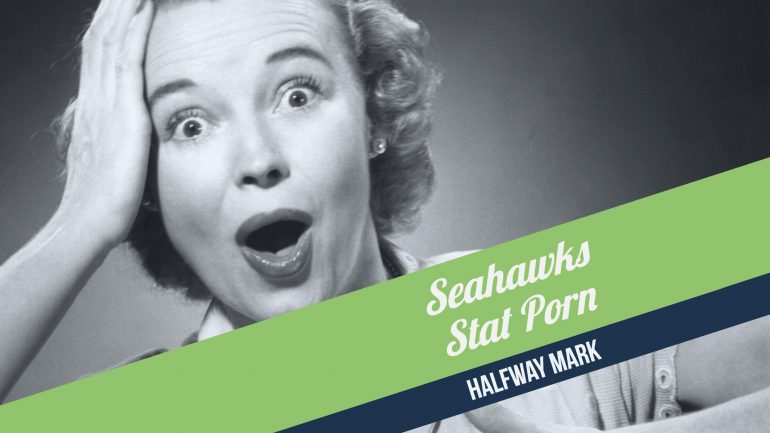 Seahawks leads the NFL in sacks per game

With all the hand-wringing about the Seahawks offense, their running game, their third down defense, and player health, this untold story continues to bubble beneath the surface. The Seahawks pass rush is damn good. In fact, no team in the NFL is sacking the quarterback more times per game than the Seahawks.

Not Von Miller and the Broncos. Not Lorenzo Alexander and his 10 sacks with the Bills. The Seahawks. Seattle has been consistent in getting to the quarterback whether at home or on the road, so shut down any talk about the noise at CenturyLink Field being the reason. Their 3.4 sacks per game represents over a sack more per game than last season, and is nearly matching the pace of the feared Miller and DeMarcus Ware 2015 Broncos. This is a critical development. Seattle has put together great defenses under Pete Carroll, but his 2013 defense stood out due to their ability to combine a great secondary with a great pass rush. This pass rush is on pace to be the best in Carroll’s time here.

Notice how 2013 and 2016 stand out from the pack. The 2014 squad, a Super Bowl team, had just 11 sacks at the same point. Consider that the team’s best pass rusher, Michael Bennett, has missed the last two games, played injured against Arizona, and missed the final quarter of the Falcons game.

There is reason to think this could even get better. Bennett will return, and newcomer Damontre Moore looked very disruptive in his first game against the Bills.

A big part of that pass rush has come from the Seahawks exceptional linebackers, K.J. Wright and Bobby Wagner. Both players are rushing the passer in blitz packages more than in recent years.

Wright has already set a career high with 3.0 sacks. Wagner already has as many sacks as the two combined for last year (1.5). Overall, they have been responsible for one out of every six team sacks, easily the highest rate since Wagner joined the league.

Wagner is on pace for most tackles by a player since Ray Lewis in 1997, third-most ever

Wagner did not play to his standards last season. This year, he is setting a new standard for himself and for his position. Luke Kuechly has rightly been considered the gold standard at middle linebacker. He entered the NFL the same season Wagner did in 2012 and won Defensive Player of Year honors in 2013 for piling up 156 tackles, 2 sacks and 4 interceptions.

Wagner is on pace for 176 tackles, 3 sacks, and 2 interceptions.

If he were to maintain this pace, he would wind up with the third-most tackles in a single season in NFL history, and most since Ray Lewis recorded 184 in 1997. He is well on his way to breaking the Seahawks single-season record of 153 tackles set by Terry Beason. Wagner has been picking up steam. After averaging just 6.7 tackles in his first three games this year, he has had at least 10 tackles in the past five games while averaging 13.6 tackles per game. He is coming off a career best 16 tackles against the Bills.

It often takes time for performance to overcome reputation. Kuechly still is atop many midseason All-Pro lists at the middle linebacker spot. Wagner has been the better player.

K.J. Wright is not far behind

Wagner is the more well known player nationally, but Wright is playing at a similar level to Wagner. After years of flashing potential that never appeared to be fully realized, Wright is coming into his own as one of the NFL’s best linebackers. Take a look at his tackle and sack totals over the past few seasons.

Frank Clark looked unstoppable during the preseason of his rookie year. He went on to notch just 3.0 sacks. A lot was riding on his development as a pass rusher heading into this season. The most valuable player you can find in a draft is a quarterback. The second most valuable is a pass rusher. John Schneider appears to have struck gold once again.

Clark already has 6.5 sacks, and is on pace to break a long-standing Seahawks record for most sacks by a second year player. Rufus Porter and Randy Edwards are tied for first with 10.5 sacks in their second season. Consider that Clark already has more sacks after playing just seven games than any Seahawks second year player has totaled in 16 games since 2007 (Darryl Tapp). After Tapp, you get in the way back machine to the 90s and 80s. Clark is becoming one of the most rare Seahawks finds, a young pass rusher.

Other players on pace for career-highs or Seahawk records

Offense, defense slow in the second quarter of the year

It is often helpful to see where the team is gaining and giving ground on both sides of the ball as the season progresses. The following table shows where the Seahawks were after four games, where they stand after eight games and whether it has improved. You can see the biggest changes have been around opponent passing yards (+50.1 yards per game) and opponent third down conversion rate (dropping from 1 to 26 in league rank). It feels like the Seahawks have been run on, but their yards per carry is fairly steady.