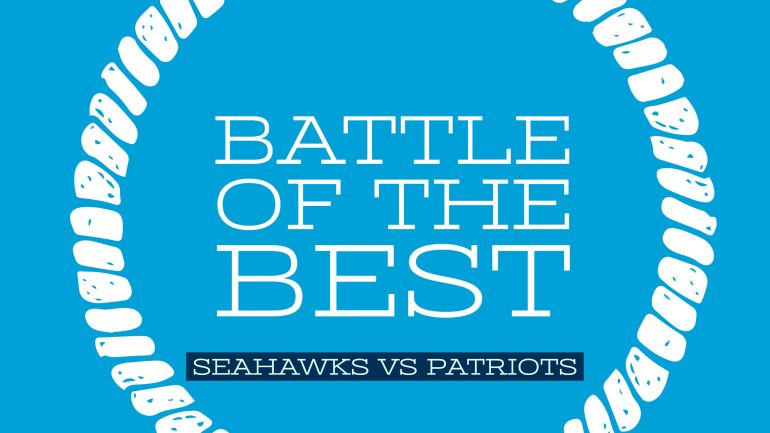 Everyone Wins When Seahawks, Patriots Clash

Game of Thrones features a litany of warring kingdoms attempting to win the Iron Throne, but at its core, it is a story about the Lannisters and the Starks. Those two proud houses have something that sets them apart. While many would superficially point to the glittering gold that funds the Lannister’s ambitions or the Starks’ frigid geographical location that offers unique strategic advantages, it is the shared traits of cunning, leadership, and grit that defines both. The same holds true for the New England Patriots and the Seattle Seahawks. These two franchises represent the best the NFL has to offer. On the rare occasion where they square off, the rest of the world fades into the background. Their game this weekend would appear to heavily favor the healthy Patriots playing at home, but be careful about underestimating the Seahawks. This coaching staff and these players bow to noone. Winter is coming. Prepare for battle.

You may have heard that these two teams played in a Super Bowl not that long ago. Rumor has it, the ending was memorable, but you’ll forgive Seahawks fans who have obliterated that part of their brains. What so many people fail to remember is what transpired over the other 134 plays. This was a magnificent game.

Deflategate had just become part of the lexicon, and Tom Brady had every intention of proving he could dominate with any type of football. He was killing the Seahawks with crossing patterns to Julian Edelman. The Seahawks secondary was battered, with Earl Thomas playing with a shoulder that would need surgery, Richard Sherman playing with an elbow that nearly needed surgery, and Kam Chancellor playing with a torn MCL that occurred just days before.

Brady was able to guide the Patriots offense down the field a few times, but was denied any points until just a few minutes remained in the first quarter. Russell Wilson, Marshawn Lynch, and the rest of the Seahawks offense was struggling to get anything going. They totalled just 22 yards on their first three possessions. Then, the miracles started.

Chris Matthews was a CFL star who began the season on the practice squad and was only playing in the game due to a Paul Richardson injury. He caught a 44-yard pass to spark a Seahawks touchdown and even the score.

Brady answered back immediately with an 80-yard touchdown in under two minutes to go back on top. Wilson did him one better, leading an 80-yard touchdown drive in 29 seconds (!!) to tie the score just before half, with Matthews catching the first, and only, touchdown of his Seahawks career.

It was Seattle’s turn to come out strong when the second half began. They scored a quick field goal, intercepted Brady, and then scored a touchdown to take a 10 point lead. They would not score another point.

As the offense sputtered, New England methodically got back into the game. Cliff Avril had left the field after the Bobby Wagner interception due to a concussion. Jeremy Lane had left after his earlier interception with multiple injuries and had been replaced by ill-prepared Tharold Simon. Brady targeted Simon mercilessly, and the Seahawks were unalble to get much pressure on him. It led to a go-ahead touchdown.

Coming off three straight punts, including two three-and-out possessions that totalled zero yards that last two times they had it, Wilson and the Seahawks had just 2:02 left on the clock to score a touchdown. First play: 39-yard completion to Lynch up the sideline. Two minute warning. There was a murmur in the stadium during the break. People knew they were witnessing a historic game.

Seattle threw deep to Jermaine Kearse on the next play. Incomplete. Then, a crucial mistake. They needed to take a timeout. That would come back to play a significant role in the outcome. Another deep throw to Mattews. Incomplete. Third down, with 1:41 left to play and 49 yards left to go. Wilson connected with Ricardo Lockette on a crucial conversion for 11 yards. Then, another miracle. Wilson threw deep to Kearse again, and he somehow came down with a ball that bounced off nearly every body part before settling into his hands. Nobody in the stadium knew he caught it. Time was ticking. Replays started to show, and there were audible gasps by Seahawks fans and sinking into chairs for Patriots fans.

It looked like the story was going to be another Patriots opponent making a miraculous catch to snatch a ring off their fingers. The confusion around the play led to the Seahawks taking another timeout as the play clock was running down. They were asking to have the officials reset the clock since they were slow to signal it was a catch, but they lost that argument and were not fast enough to get their play in.

Having burned two of their three timeouts, they now had to come up with a plan that maximized their scoring chances from the five yard line with 1:06 left to play without giving Brady too much time to mount a drive of his own. They called a run play first that was a shoestring tackle from Dont’a Hightower away from being a touchdown. Time ticked away. One more yard to go. Then, the next miracle. The last miracle.

Malcolm Butler, an unknown practice squad player, was the fourth cornerback on the team behind names like Darrelle Revis and Brandon Browner. He went from nobody to a legend in an instant.

The decision by the Seahawks to throw on that play was the story that stuck, and for good reason, but the play Butler made on that ball was remarkable. Breaking up the play would have been amazing. Intercepting the pass was legendary.

History will remember that game as the time the Seahawks blew a championship and when the Patriots proved their dynasty status. There is such misleading clarity from a result that robs us of the texture that led up to it. This was arguably the best Super Bowl ever played. Seattle really had no business competing with the Patriots given their injuries. They had every reason to accept their fate at various moments in that game. That is not their way.

I came away with the impression that the Patriots had the better football team that day, but the Seahawks had the more impressive mentality. There was a little arrogance with New England that did not serve them well. Adversity is uncomfortable for them. Seattle embraces it.

Much has changed, but not all

Years removed from that last game, the two teams feature many of the same stars. Some role players, like Butler and DeShawn Shead, have gone from obscurity to starters. Others, like Justin Britt, are playing different positions entirely. Gone are stars like Lynch, Chandler Jones, Jamie Collins, Revis, and Browner. New stars, ranging from Jimmy Graham to Martellus Bennett, have joined the fray. Doug Baldwin ran circles around Revis most of that game, but Wilson only targeted him one time (a touchdown). One might expect Butler to draw coverage duties on Baldwin this time. That would leave a young player like Eric Rowe their to defend Kearse.

One of the most impactful matchup changes might be the addition of Tyler Lockett for Seattle. The Patriots do not necessarily have a great answer for him, and remember that Bryan Walters was on punt and kick return duties in that game. Big difference.

Brady picked on Simon, who is no longer in the picture. He may still like his chances with jitterbugs like Edelman and Chris Hogan going against a bulkier corner like Shead. Lane will be challenged all day long, but he has been here before and come away with the football.

Jones and Collins were huge in that game. Collins led the team in tackles and Jones had a sack. There are no obvious replacements for those players.

The Seahawks offensive line is far more unsettled than it was back then, though, which is probably the equalizer. This Seahawks line is actually better at pass protection than that one was. Without great pass rushers, the Patriots may not be able to exploit this line the way they want.

New England’s line has been overhauled as well, and is not exactly a strength on the team. Guys like Frank Clark, Damontre Moore, and Avril could cause far more disruption than what Brady experienced in the Super Bowl.

Something tells me the new running backs are going to play a large role in the outcome. Dion Lewis is coming back and is a far greater threat than Shane Vareen out of the backfield (even though Vareen went for 11 catches and 68 yards in the Super Bowl). C.J. Prosise is still an unknown for the league, and figures to get a far greater role this weekend. The Patriots can study all the film they want, and still not know how the Seahawks plan to deploy Prosise.

You have to assume the biggest difference may be at the tight end position for both teams. The Patriots basically only had one tight end the last time these teams played. The Seahawks had Luke Willson and Cooper Helfet. They still have Willson, but have added Graham. New England has added Bennett. Both players will challenge the defenses.

A healthy Seahawks secondary versus Rob Gronkowski, Bennett, and Edelman will need to hold up better than an underperforming Patriots secondary facing Baldwin, Graham, and Lockett. Which side fares better in those matchups will be in a strong position to win.

Vegas likes the Patriots chances. They should. Seattle enters this game with far more questions than the Patriots. They are more injured, less rested, and playing in one of the league’s toughest venues. New England opened as 6.5 point favorites, and bettors have caused them to move the line up to 7.5 points. It is fair to wonder if the Seahawks record long streak of 81 games without losing by more than 10 points is destined to end on Sunday night. History indicates otherwise.

Seattle opponents have been favored by more than 3 points five times since Wilson joined the team in 2012. The Seahawks have won four of those five games, including two on the road, and covered the spread each time. Look a little closer. Notice anything?

One of those four wins came against the team they are playing on Sunday. Granted, it was at home, but it was also just the sixth game of Wilson’s career on a team that was 3-2 at the time. Brady threw 58 times for nearly 400 yards, but was also picked off twice. That’s right. He has been intercepted at least twice each time he has played this defense.

Wilson threw three touchdowns against no interceptions. He has a total of five touchdowns and only one interception against New England. He has posted passer rating of 110 and 133 in his two starts. It was a beautiful strike to Sidney Rice that won that game. No wonder Bill Belichick admires him so much.

Seattle was the underdog in that game, at least partially due to being unproven and still unknown. That element of surprise is gone. In its place, though, may be another. The Seahawks are not being given much of a chance to win this game. They like that they are getting healthier on offense and defense. No team circles the wagons better than an underestimated Seahawks team. They had no business giving the Patriots the game they did in the Super Bowl two years ago, and probably could say the same thing about the game four years ago as well. Those moments are like sweet nectar for this team.

Two great teams clash again. Different in many ways, but the same in their right to claim greatness. There will be crunching tackles, beautiful passes, and clever plays. Coaches will adjust and re-adjust. Players will compete at the highest level.

What happens this weekend is anyone’s guess, but the one thing we can be certain of is that everyone watching will win.