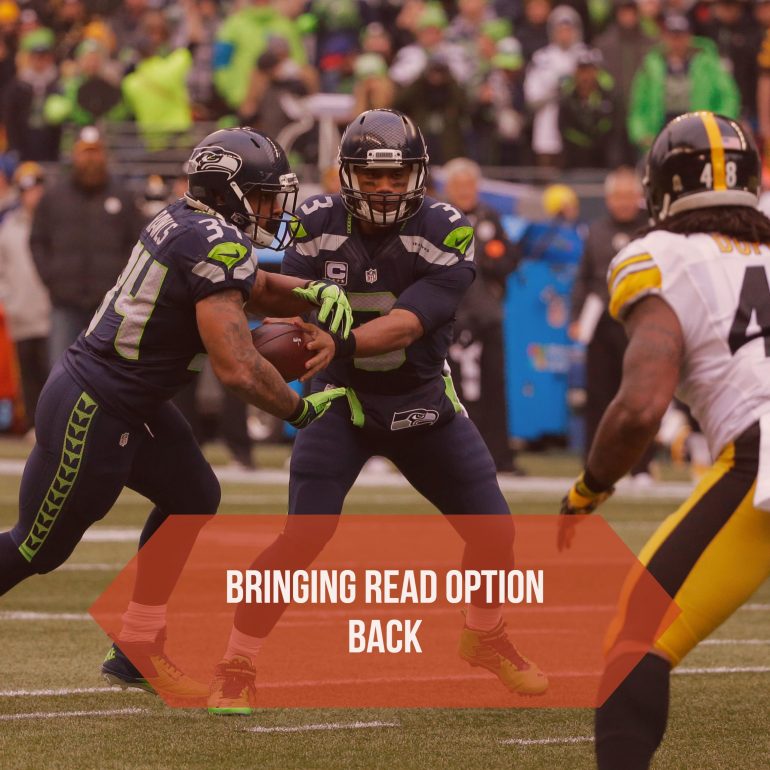 Seahawks vs Arizona – Bringing the Read Option Back

The Seahawks offense against Arizona in the first half of week 17 was a disaster. The Seahawks managed only 3 points and posting 119 yards on 36 plays, good for a paltry 3.03 yards/play. And worst of all, Russell Wilson was sacked five times.  But Seattle would recover in the second half, scoring 28 points, averaging 6.41 yards/play, and giving up just one more sack.  So what lead to such an impressive turn around?

Well there’s certainly more than just one thing, but what stands out is Seattle’s dependence on the read option. The threat of a Russ keeper is nothing new, but with all of his injuries this season it’s become common. Before half time, the Seahawks ran read option just four times. And while they weren’t overwhelming successful, they did generate one explosive play.

Whether it was that because of that play or something else, the coaching staff fully renewed their commitment to the read option in the second half. Seattle ran four read option plays, as many as they did in the entire first half, on the first drive of the second half alone. The very first run of that drive was read option, and it generated another explosive play.

This is a great example of how the read option helps a running game. Seattle is lined up in a heavy set with two tight ends. Arizona responds with eight men in the box, five of which are right on the line of scrimmage. At the snap, the offensive line blocks down and the playside tight end releases straight into the second level. This leaves the playside defensive end, Markus Golden, unblocked and waiting on the keeper, the offensive line has a huge numbers advantage. Both of the tackle & guard pairs are able to double up on their defenders, leaving only Britt and the backside TE with single blocks.

This is textbook stuff, but it can’t be understated what a huge advantage this is. The read option gets downplayed at times, and NFL defenses have certainly adapted to try to limit it’s effectiveness. But at it’s core the read option is simply a numbers game, and Seattle is able to execute it here to get a five on four match up.

Here’s another example from the same drive.

Gilliam rides his man out of the play and a gaping hole is opened up the middle of the defense. Willson and Ifedi are quickly into the second level, and it’s honestly disappointing that Collins doesn’t score on this play.  You can also see that, had Okafor committed to Collins, the defense is sealed off  so well that Russ would’ve likely scored on the keeper. Cool stuff! Of course, the read option can quickly lose it’s teeth if there is no threat of the QB keeping. Russ was up to the task.

It’s easy to see just from the plays above what a boon the read option is for an offense. But in case you have doubts, it’s something that Pete Carroll has talked about as well. In his week 17 Wednesday press conference, when asked about the reasons for the run game struggles, said that the primary reason was Russell’s inability to run. Pete also commented that they didn’t transition quickly enough out of the “new style they had to run” as they were dealing with Russell’s injuries.

Hopefully after their second half performance against Arizona, Seattle is ready to fully reintegrate the read option into their playbook.