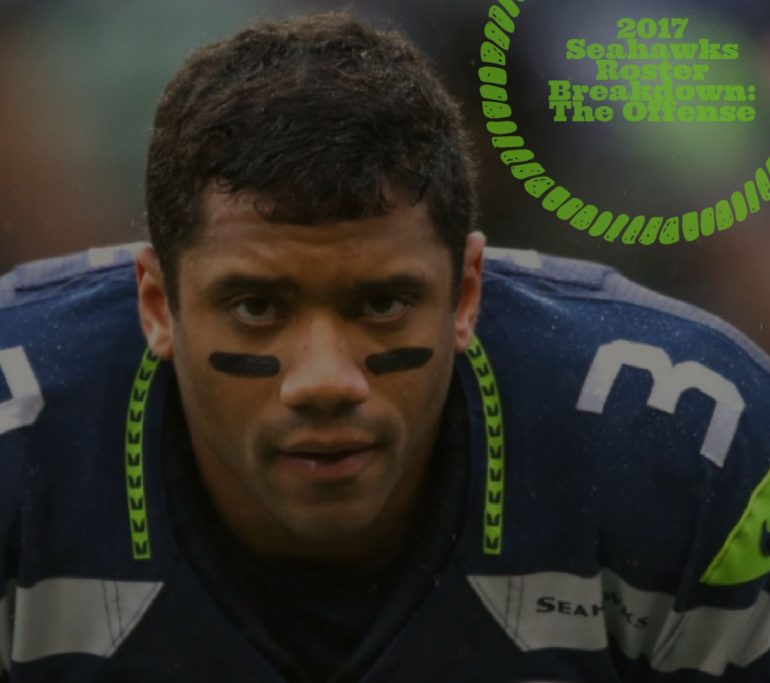 On Saturday, NFL teams cut their rosters down from 90 to 53. I broke down every position group and reviewed the unit’s strengths and weaknesses.

Strengths – Russell Wilson. He’s a top 5 quarterback, and demonstrated MVP caliber play in the second half of 2015. Russ mitigates offensive line issues with his mobility, which he uses to extend plays and create explosive plays. That mobility also provides a huge boost to the run game, opening up space for the running back with the read option. But for all the attention he gets as a runner, Russ is even deadlier from the pocket. His arm lets him attack any part of the field, and his feel in the quick passing game has steadily improved. His passer rating of 118 from the pocket in 2015 was the highest for that year and the three previous years.

I could go on and on about Russell, and I probably should. For everything great about Russ, we probably don’t appreciate him enough. But instead I’ll just share my a couple of my favorite Russell Wilson plays, because I’m not nearly talented enough of a writer to describe this kind of wonder:

Weaknesses – Depth. Austin Davis is a bad quarterback. His career 4.77 ANY/A is slightly worse than 2016 Ryan Fitzpatrick (4.99 ANY/A) and slightly better than 2016 Brock Osweiler (4.34 ANY/A). In his eight starts with St. Louis in 2014, Davis threw 9 interceptions. He’s still just 28, so it’s possible he’s still improving, but he’s also pretty limited physically. Davis is decently mobile, but his arm strength makes Matt Hasselbeck and Matt Flynn’s arms look like howitzers. While he earned his spot over Boykin in the preseason, it’s impossible to justify passing on Colin Kaepernick for Davis.

As for Russ, his biggest weakness remains staying in rhythm. Wilson will pass up shorter routes waiting for slower developing routes, hoping for big plays down the field. This can be exacerbated as Russ is conservative when it comes to fitting the ball into tight windows. Russ and the coaching staff are extremely turnover adverse, and there are times where it seems like the risk/reward calculation is off.

Strengths – Toughness. Thomas Rawls is the smallest running back of the bunch next to McKissic, and Thomas Rawls is a runaway train engine. While Rawls and Lacy look to pound the ball on the ground, Prosise presents a polished receiving option out of the backfield and a 220lb runner in open space. Carson is maybe the best of both worlds, showing off his receiving ability and his ability to punish defenders at the end of runs. With McKissic, hybrid WR/RB, rounding out the group, this is a deep and very well rounded group of running backs. And while no one in this group would be considered a special athlete, Lacy is the only subpar athlete of the group.

Weaknesses – Health. Rawls and Prosise have struggled to stay on the field. Rawls’ body struggles to keep up with his running style, while Prosise seems to have a never ending string of one-off injuries. Seattle has the depth to handle further injuries to these two, but it’s not clear we’ll see this unit’s true upside.

Seattle’s decision to carry a fullback is not surprising but comes with some pros and cons. Seattle has seemingly used fullbacks well out of the backfield, especially in shorter yardage situations, but they’ve actually been overall worse running the ball with a fullback on the field since 2015. Seattle will also motion a TE to FB from time to time, so the wisdom in using a roster spot on Madden, or any fullback, is questionable.

Strengths – Separation. Doug Baldwin is always open because he can do things like this:

Paul Richardson and Tyler Lockett are similar players, although they’re both still learning to be the kind of technician that Doug is at this point in his career. And all of these guys, despite their lack of size, can win on the red line either by going up and getting a ball or separating from the DB over the top. This is a group tailored to Russell Wilson, who depends on receivers being traditionally open.

There is still quite a bit of potential with this group. Tanner is a height/weight/speed prospect that found his way on to the field last year as a rookie. Amara Darboh is an 83rd percentile athlete at WR per SPARQ. And both Lockett and Preach have yet to fully realize their upside, with both players still young (24 and 25 respectively) and hampered by injuries.

Weaknesses – Health. Richardson has been notoriously injury prone dating back to his college career, and Lockett is still recovering from a broken leg and didn’t see the field this preseason. Seattle traded away veteran Jermaine Kearse, leaving them one Preach injury or Lockett setback away from depending on Tanner or Amara as WR3. According to Sharp Football Stats, Seattle ran a 3+WR package roughly two thirds of the time, so this is an incredibly important role to potential turn over to two unproven players.

Strengths – Pass catching. Pete and John have bucked some of the modern NFL trends, but not at tight end. In the history of the NFL, only Tony Gonzalez, Jason Witten, Antonio Gates, Shannon Sharpe, and Harold Carmichael have put up better receiving numbers than Jimmy Graham has in his career. Jimmy’s calling card is his size and has been rewarded with more opportunities to go up and over defenders for balls as he has built chemistry with Russ. He’s shown that he can pull in balls literally with one hand tied behind his back, and is more than capable picking up yards in the open field after the catch.

Willson is another receiving TE who’s sometimes questionable hands are offset by his speed and athleticism. Willson won’t win contested catches, but he is more than capable of getting behind linebackers and getting across the field quickly on deep crossing patterns.

Weaknesses – Blocking. Jimmy Graham has improved as a blocker, in that he tries now and didn’t so much before. That counts for something to be sure, and his ability has probably outpaced his reputation at this point, but he’s still a negative as a blocker. Willson is better but is of similar ilk, he tries and he knows where to be and more often than not he does his job. But Willson doesn’t make plays as a blocker and can get bullied and beat.

Vannett is the real disappointment in this category. He was drafted to be a traditional tight end, a versatile player that was a plus blocking and a big target in the passing game in college. He looked the part early in the preseason last year, but had something of a lost rookie season followed up by an underwhelming 2017 preseason. His blocking has been poor and, with the exception of one big play down the middle of the field against KC, has been invisible in the passing game.

Strengths – Interior pass protection? Emphasizing interior pass protection with Russell’s height and ability to avoid edge pressure makes sense, and seems to have been the intent with the addition of Joeckel and Aboushi. Both are more finesse players, quick footed but not particularly strong, and Aboushi comes with a good track record in protecting the quarterback. Justin Britt is a solid center in both the run and pass game, and appeared to pick up the intricacies of the center position in his first year at the position. Odhiambo is likely better as a pass protector than a run blocker, and if you squint you can see the OL taking a significant step forward in pass protection from last year. That likely still leaves them somewhere near the bottom of the league, but with a healthy Russ that could be enough to still have a highly effective passing offense.

Depth is likely a strength as well. Pocic, Tobin, and Glowinski may not be world beaters, they couldn’t even earn a starting spot on this line, but they’re all NFL players. Should injuries or benchings occur, Cable won’t need to scout power forwards from conference USA for a replacement.

Insofar as youth can be a strength, youth is also a strength for this group. Aboushi and Britt are the two oldest starters at 26, so continued improvement is still realistic. Let’s hope they get it.

Weaknesses – If you raise the bar from the 2016 Seahawks offensive line to NFL offensive lines, pretty much everything is a weakness for this group. The group may have taken a step forward in pass protection, but they may also have taken a step backwards in run blocking. Outside of Britt, Ifedi is the only starter that looks to be an asset in the run game. And while he can certainly maul defenders, he’s as mistake prone a run blocker as he is a pass protector. While the offensive line seems to made some improvements, we should keep in mind that they haven’t been asked to do many blitz or stunt pickups in the preseason. Both of which were issues last year.

The offensive line is better at some things than others, but it’s an overall poor group that is hard to see scratching the top 25 offensive lines in the league.

Overall, not much has change for the offense since 2015. Russ is a stud, the offense has weapons, and the offensive line is a huge question mark. As far as the skill position players go, this is probably the most talented Seattle has been since 2013. There are some notable health concerns for the running backs and especially the receivers, who likely don’t have the depth to absorb any injuries, but Russ, Jimmy, and Doug make up one of the most dangerous sets of triplets in the NFL. If Russ can stay healthy, look for this to be one of the best offenses in the league regardless of offensive line performance.

Part I – The Start of Something Special