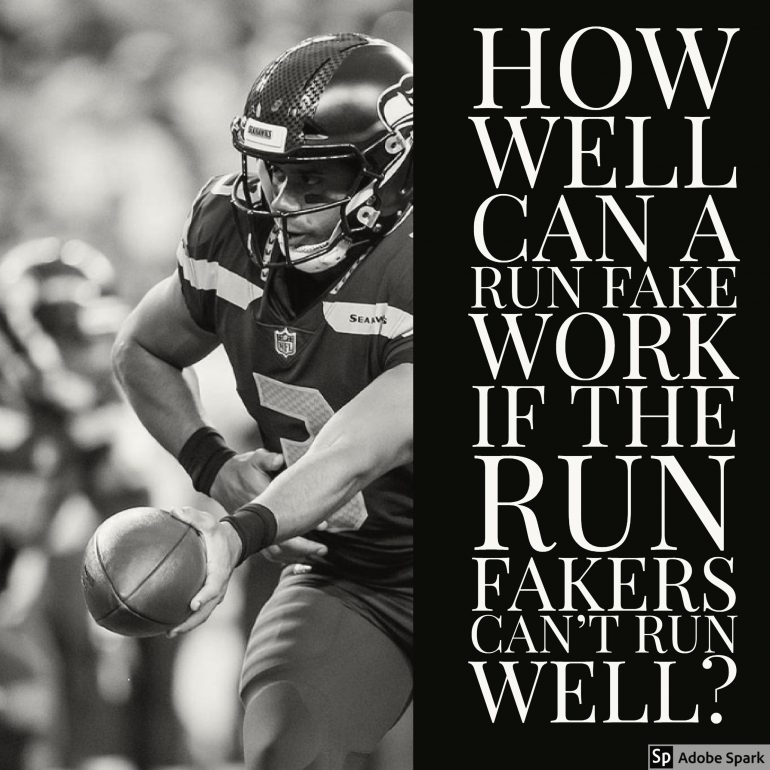 Last week against Houston, Russell Wilson set a franchise record for passing yards with 452 yards on 41 attempts. Both the number of attempts and the yards/attempt (11.02) ranked second highest for the season. It was the second game this year that Russ threw for 4 touchdowns, and the second game of the year where Seattle cracked 40 points. The Seahawks offense was hugely successful, with one minor exception.

Removing Russell Wilson from the equation, Seattle rushed 17 times for 3 yards (including Lockett’s 1 run for -2 yards). Including Russell, Seattle still managed to rush for just 1.57 yards/carry. That’s by far their worst rushing performance of the year, nearly a yard less than their second worst effort, and it marks the 5th game where Seattle has rushed for less than 3.5 yards/carry this season. Not surprising, Seattle ranks as one of the worst rushing offenses by DVOA. At 28th, the Seahawks are better than just the Jets, Lions, Dolphins, and Cardinals at running the ball.

That the passing game has managed to remain potent while the rushing game fails should not be a surprise. There’s little to support the idea that running well or running often helps a quarterback pass well. A question that is frequently asked, however, is how does rushing affect play action passing?

If Sunday’s game is any indication, the answer to that question is that rushing affects play action very little. We’ve already discussed how poorly Seattle ran against Houston and, while they ran far too often considering how bad the run game was, 16 rushes in a game is hardly pounding the ball. Despite that, Seattle called 7 play action passes on their second and third to last drives.

Seattle created several big play opportunities on each of those plays, converting on 3 of them for 81 yards and a touchdown (along with a 7 yard touchdown called back on a penalty).

Obviously this is anecdotal evidence. It also comes with the caveat that, while Seattle ran neither often nor well, Houston defenders likely believed Seattle was willing to run. How effective would those plays have been if Seattle was known as a pass always team that quickly abandons the run? Who knows. But with how poorly Seattle has ran the ball and little evidence to support the idea that running helps passing, the Seahawks should try to find out.