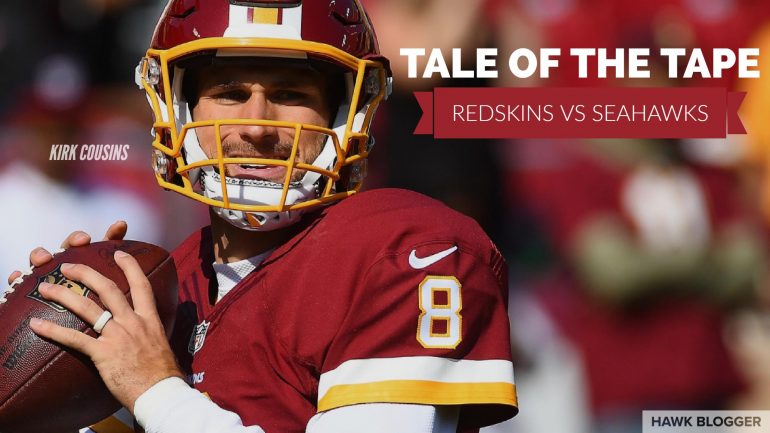 Tale of the Tape — Battered Redskins Remain a Worthy Opponent

These are the weeks when the relentless march forward of the NFL schedule feels almost cruel. The Seahawks win over the Texans felt like that perfect cozy warmth you achieve while nestled between flannel sheets on a cool northwest morning. This Redskins game is that gnawing voice in the back of your head telling you it’s time to get up and go back to work. Unlikely to recreate the magic from this Sunday, the Seahawks set out to see if they can sustain their offensive explosion against a Redskins team that will limp into CenturyLink Field. Armed with a quarterback playing great football and an opportunistic defense, Washington can make a game of this if the Seahawks get caught basking in the glow of their recent victory.

Since week three of this season, only one team has gained more yards than this Seahawks offense, and just two teams have scored more points. The only Seahawks team to ever gain more yards through its first seven games was the 2005 Super Bowl squad that featured multiple hall of fame offensive linemen and an MVP at running back who broke the NFL record for touchdowns in a season. Oh, and they just replaced their worst player, with one of the better left tackles in football.
Just one week ago, it was the Seahawks defense earning the praise as they ascended to the top NFL scoring defense again. Now, the Seahawks offense is taking center stage. Washington has some real quality on the defensive side of the ball, but lost a key pass rusher this week when DE Matthew Ioannidis broke his hand. DE Ryan Kerrigan is a playmaking pass rusher who has 6.0 sacks on the year, a pick-six, and two forced fumbles. He will be lining up over Germain Ifedi most of the day. Ifedi has yet to surrender a sack this season, but has given up a bushel of hurries. This is the first game the Seahawks can reasonably consider providing Ifedi with more help since Duane Brown will not require it on the left side. Preseton Smith and Junior Galette are both productive pass rushers, and will keep the Seahawks on their toes all afternoon. Even without Ioannidis, this is one of the better pass rush teams in football.

The Seahawks are 10th in the NFL in opponent sack rate over their last three games, and that includes the game against the Rams. They are becoming one of the better pass blocking teams in the league this year. Yes, I really just wrote that. And that was before adding Brown at left tackle.

Russell Wilson is playing at an MVP level the past two weeks, and has a full compliment of weapons to attack the Redskins with. Look for the Seahawks to continue gaining yards through the air, but I have a sneaking suspicion they are going to try and catch the Redskins over-committing and find some open lanes in the run game. Jamison Crowder is a really nice slot receiver who will challenge Justin Coleman. He will be an even more important target for the Redskins without tight ends Jordan Reed and Niles Paul available. Vernon Davis will become a key for Kirk Cousins, who loves to hit his tight ends.

Chris Thompson is a versatile runner who is best used as a receiver out of the back field. He runs tough and can be explosive.

Earl Thomas may not play, and that will make passing against this secondary more appealing. Cousins has been terrific this season, and will be salivating after reviewing the bevy of big plays Houston managed against the Seahawks.

Injuries have ravaged the Redskins offensive line. It is unclear who, if any, of the injured linemen will return this week. The Redskins managed just 285 yards and a season-low 49 rushing yards last week against the Cowboys. They also committed three turnovers.

The Seahawks pass rush has been getting warmed up of late, and their five sacks against the Texans were an under-appreciated key to that victory. Frank Clark just recorded the single best pass rushing performance of any player in the NFL this season against Houston, per ProFootballFocus. Having Dwight Freeney in tow has allowed Clark to slide back to the left end position in nickel.

Seattle should be able to control the line of scrimmage, and has a real chance to completely overwhelm the Washington line in pass rush, which usually leads to game-changing turnovers.

Washington is among the worst return teams in the NFL.