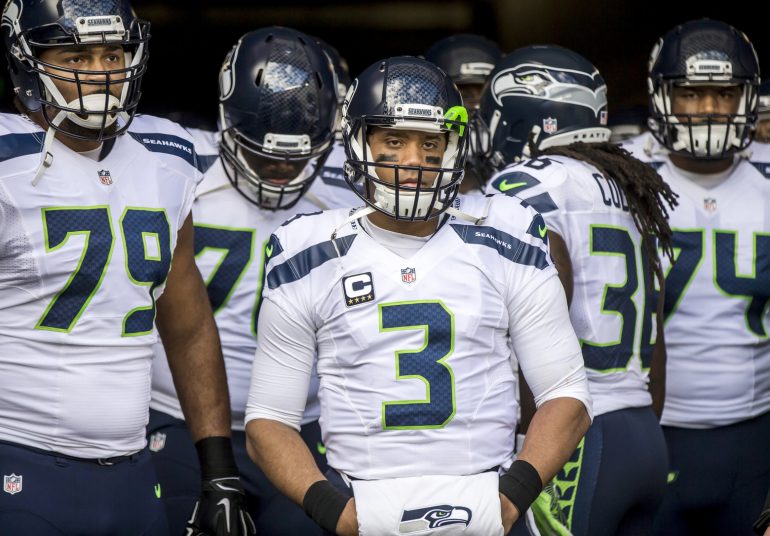 Riding immense success on the field, Russell Wilson has become one of the most recognizable NFL players off of it. Married to R&B star Ciara, Russell Wilson has been featured in commercials, graced magazine covers, been a guest on late night television, had a cameo in a movie, and hosted award shows. And yet, there are still aspects of Russell Wilson that have gone largely unnoticed. For example, did you know that, relative to other professional quarterbacks, Russell Wilson is quite short?

While this fact may not be known by your average Joe Fan, at 5’10 and 5/8th inches, Wilson is considerably below average for his position. This has lead many to speculate about Wilson’s ability to see and use certain parts of the field. Specifically, the short middle part of the field.

Short is a little more difficult. Arbitrarily, we’ll consider any pass that travels less than 7 yards from the line of scrimmage as short. Since we want to look at how far a pass traveled we’ll effectively use air yards, but we won’t actually use air yards because that stat depends on the depth of the quarterback’s drop. A ball thrown 10 yards in the air from a 3 step drop will end up further downfield than a ball thrown 10 yards from a 7 step drop. So what we’ll actually use is the difference between yards gain and yards after the catch to determine where a ball was caught.

Now that we know where the short middle part of the field is, lets look at how NFL quarterbacks use the different parts of the field in 2016.

Medium length is between 7 and 15 yards past the line of scrimmage, and long is anything past 15 yards. Throw% is the percentage of throws to that area of the field.

So, what does this table look like for Russ?

Looking just at the relative trends, Russ matches the averages fairly well. Russ throws short most often, throwing less to the short middle than average but not by much, and completes a high percentage of passes. He throws few interceptions to that area, but also throws fewer touchdowns, gains fewer yards on average, and has a lower success rate, the same as other NFL QBs.

Comparing the numbers, Russ’ proficiency as a down field passer stands out. While all NFL quarterbacks tended to be successful when attacking the medium middle of the field, Russ blows the NFL averages out of the water in comp%, AvgEPA, TD%, and YPA. Russ also does much better in all of the long distances, especially in comp%, AvgEPA, YPA, and success rate.

By nearly every measure, Russell is worse throwing to the short middle of the field than the average NFL quarterback. But how does he compare to other, individual quarterbacks? This is the list of the 39 quarterbacks who threw at least 100 passes in 2016. Wilson ranks in the bottom half every category except yards per attempt. He’s in the bottom 10 of four categories: AvgEPA, AvgWPA, TD%, and success rate. Other quarterbacks with low ranking while throwing to the middle of the field include: Blaine Gabbert, Bryce Petty, Ben Roesthlisberger, Case Keenum, and Jared Goff. Quarterbacks who do particularly well in the short middle of the field include: Andrew Luck, Matt Ryan, Joe Flacco, Tom Brady, Aaron Rodgers, and the undisputed king of the short middle, Cody Kessler.

Or it simply a case of good quarterbacks being better than bad quarterbacks, regardless of where they are throwing to?

To answer that question, lets look at the delta between these stats when a quarterback targets the short middle vs each quarterbacks overall stats.

Russell’s AvgEPA and AvgWPA targeting the short middle are terrible no matter how you slice them. He’s bottom 5 by raw totals and by delta.

Negative numbers are good here, as that means the QB threw fewer picks to the short middle than their average. Russell is neither negative nor above average, but still ranks better than Cousins, Ryan, Prescott, Smith, and Rodgers.

Rodgers and Ryan are the only top tier quarterbacks who throw a higher percentage of touchdowns targeting the short middle. That said, only Dak is the only high performing QB who has a lower relative TD% than Russell.

Not surprisingly, passes to the short middle of the field gain less yards on average for most quarterbacks. While it may be tempting to try to pick up yards after the catch by throwing short, most quarterbacks are able to pick up more yards by simply throwing the ball further down the field. Rodgers and a few other respectable QBs manage to average more yards targeting the short middle, but the top 5 of this list is truly a nightmare.

Here’s all of that data in a single table. While Russ still rates in the bottom half of every category except YPA diff, and ranks in the bottom 10 in now 5 categories, other quarterbacks also rank significantly lower. Andrew Luck, Matt Ryan, Tom Brady, and Aaron Rodgers are all considerably worse throwing to the short middle part of the field than their averages. Only Joe Flacco and Cody Kessler remain from the original list and are joined by Colin Kaepernick, Eli Manning, and Carson Palmer.