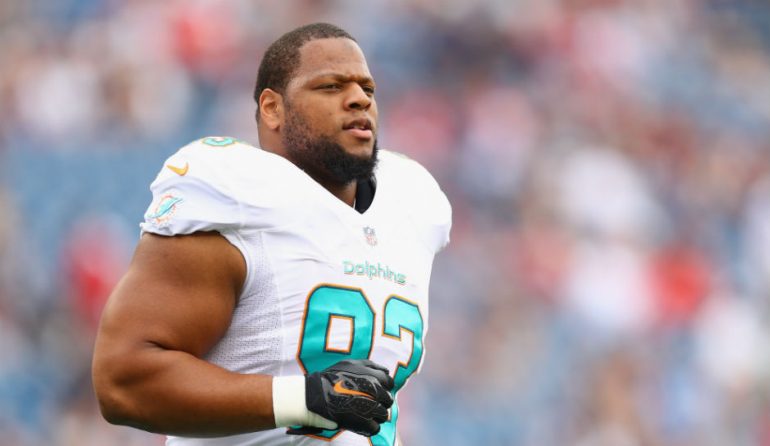 Ndamukong Suh is expected to hit the market.

Who should Seahawks target in free agency?

The Seattle Seahawks were clear in their decision to release Richard Sherman.

Moving on from Sherman indicates the team values the $11 million dollar cap savings over a potential compensatory pick in 2020.

Given the club also created salary cap space in the Michael Bennett trade, although not very much, and the release of cornerback Jeremy Lane, the Seahawks have created flexibility heading into free agency and considering the fact that they are currently scheduled to have over $90 million in cap space for 2019, which ranks in the top-10 of the league, it seems pretty likely John Schneider will use that Sherman cap savings in this year’s free-agent period, which officially begins Wednesday Mar 14 at 1pm PT.

Based on my calculations, the Seahawks have about $20-22 million they can spend in free agency on salary cap space for 2018. It might be closer to $20 million after re-upping safety Bradley McDougald on Monday morning. Remember, first-year cap hits are typically lower than the APY (average per year).

After the Sherman news came out, I skowered the free-agent list, and as I pointed out on Twitter on Sunday, I believe the Seahawks would be wise to spend their majority of cap space on offensive players — offensive line, tight end, and wide receiver all seem would all make sense, and focus their next two drafts on re-building the defense. They need to find young, hungry players at all three levels. However, there is one exception…

With that in mind, based on a combination of team need, expected cost, age, and positional value — here’s who the Seahawks should be targeting on the free agent market:

Josh Sitton, guard: If I was building the free-agent board for Seattle, Sitton would be my No. 1 offensive target,. Sitton has been graded very highly in pass protection over his career, which is badly needed in the post-Cable era, and can be a quality starter at both right guard and left guard, two need spots for Seattle. The former Chicago Bear was also coached by Mike Solari, Seattle’s new OL coach, in Green Bay during the 2015 season, and has plenty of familiarity with John Schneider, who drafted Sitton when he was in the Packers front office in 2008. Sitton is a bit older than your typical ideal free agent (will be 32 in June), but he will be much more affordable than Andrew Norwell.

Ndamukong Suh, defensive tackle: There is one exception to everything I said in the opener and that is Suh, who is expected to be released before Wednesday. Suh, not Sheldon Richardson, is the one defensive player on the market worth splurging free agent dollars on and would make the Sherman and Bennett moves that much more justifiable. The dominant defensive tackle not only wouldn’t impact the comp pick formula, since he is being released, but would fill a huge position of need on the defensive line and would add much needed pass-rushing prowell. Suh is a Hall of Fame calibre player that is flat-out unblockable when he is motivated and it’s very exciting to imagine how good he would be, playing behind the crowd at CenturyLink Field. Suh will almost surely command a large salary to acquire, but given the $13 million plus they saved from Bennett + Sherman, there is room to make a move like this work. Suh also has plenty of ties to the Pacfic Northwest area, growing up in Portland, Oregon, and was seen working out in Seattle in an Instagram post he made on Monday morning. We’ll see how good Pete Carroll can still recruit if Suh does in fact become available.

Austin Seferian-Jenkins, tight end: Jason La Canfora of CBS Sports reported Sunday that the Seahawks are among a handful of teams that are interested in Seferian-Jenkins.
Given that the Seahawks are expected to lose Jimmy Graham in free agency, he would be a solid replacement at a fraction of the cos. Seferian-Jenkins is the prime age for a free-agent target (26), and showed drastic signs of improvement — both on and off the field — last season after a rocky start to his NFL career. The Washington product has plenty of familarity with the Seattle area and would give Russell Wilson a 6-foot-6 target that could be well utilized in the red zone. The off-field issues that hampered him earlier in his career could help keep his price tag at an affordable level, which could be a big plus. If ASJ gets too expensive, a flier on Tyler Eifert, a first-round talent with incredible red zone product, might be worth a flier as well. Eifert has had major back issues over the last few seasons, which will likely prevent him from getting a long-term deal.

Terrelle Pryor: The Seahawks have starters already in house in Doug Baldwin and Tyler Lockett and potential fourth WR options with the acquisition of Marcus Johnson and last year’s draft picks, Amara Darboh and David Moore. So there is a clear hole in the three-WR set and that’s where a free-agent addition would fit the bill. Schneider mentioned the challenge of acclimating young receivers from college, because of the challenges in learning how to run pro routes, so he prefer a veteran in that slot. Pryor might be a good bet, however, because his cost will be a lot less than Paul Richardson or Marqise Lee, and Seattle was trying to convert him to receiver when he was trying out for the team at QB a few seasons ago. Pryor is worth a flier and has the upside worthy of a free agent risk. He would give Seattle a speed-size component they haven’t had since Sidney Rice, although he is clearly less polished as a wideout.

Avoid all veteran running backs: I keep seeing people suggest the Seahawks’ need to hedge at running back prior to the draft, and frankly I do not understand it. The only free agent running back I could talk myself into is Frank Gore and that is more as a veteran role model than someone you’d actually want to utilize on the field. Avoid DeMarco Murray. Avoid Doug Martin. Avoid them all. If the Seahawks are going to add more talent at running back, it should be in the draft, and somewhere in the middle rounds. Chris Carson or Mike Davis are just as capable as most of these hedges if the Seahawks improve the offensivde line. Having too many backs in the room last season, after the Eddie Lacy signing, cost the team Alex Collins and the Seahawks shouldn’t be looking to double down on that mistake.