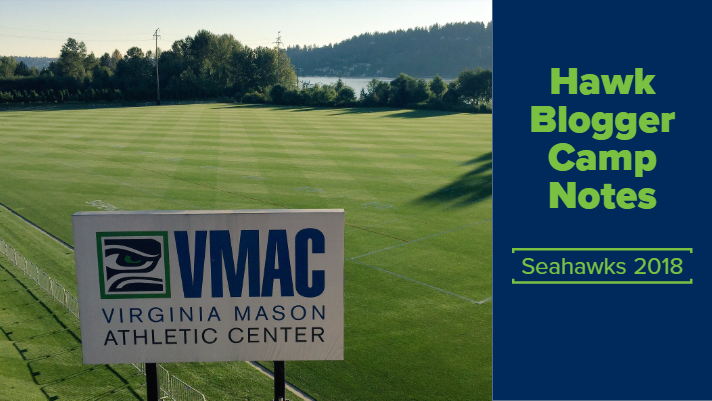 Former college quarterback Keenan Reynolds was easily the standout player of this practice. With Doug Baldwin out for undisclosed reasons, Reynolds took full advantage of the opportunity to get extra snaps in the slot. He played at a different speed than most of the other players on the field, catching several passes. Most notably, Reynolds was getting significant separation on his routes. There are some definite deja vu moments watching Reynolds that remind me of the first few times I saw Baldwin play. I’m surprised he has already been signed and released by two other teams after entering the NFL in 2016. Perhaps, he will fade when the games start. All I know right now is that he looks like someone who could contribute right away.

There is so much going on in practice that it helps to come in with some specific things or players you plan to watch. Green was on my list. The 3rd-round pick is an important piece of the puzzle for this defensive line. They cannot afford for him to be a project if they hope to have a viable pass rush this season. The team has him running as second-string 5-technique defensive end behind Branden Jackson. This was the first practice where the team donned pads, which allowed them to do 1v1 pass rush drills. That’s where Green popped for me. Positioned as an interior pass rusher facing backup right guard Jordan Roos, Green instantly swam around Roos for a clear path to the quarterback on his first rush. This was not typical of what others were doing. It was done at a speed and efficiency that stood out.

There were a few differences in this drill from when Tom Cable ran it. One of those differences was that the same two opposing players did back-to-back snaps instead of just one. On the second snap, Green bull-rushed the incredibly strong Roos and drove him back 3-4 yards before shedding him and tagging the quarterback. Some might have seen that as Roos winning. That was quality interior pressure. There were other plays where the guard was able to anchor and stop the rush. This was not one of those times.

The other difference in the drill under Mike Solari is they did 2v2 as well. This allowed both the defensive and offensive lines to work on twists and stunts. Those force offensive linemen to communicate and hand off defenders, and allows defensive linemen to work on their rhythm and timing. Green lined up as an end for this part of the drill, and looked smooth and comfortable twisting behind the defensive tackle and creating inside pressure. It was not a dominant showing by the rookie, but it was promising.

I mentioned Thompson had put on some weight since last season in my first set of notes. Part of what I wanted to see was how physical he would be once the pads came on. It did not take long to see. The team ran red zone drills early on, and on one play, a receiver who I believe was Marcus Johnson ran a drag route from left-to-right about five yards beyond the line of scrimmage. Wilson delivered the ball to Johnson, but Thompson had read the play and closed from his safety spot to blow up Johnson and break up the pass. Nice to see. Later in practice, Thompson read a deep pass from Wilson to speedy new receiver Marvin Bracy, who was being covered by Tre Flowers, and sprinted over to pick the ball off before it could reach Bracy’s hands. Nice play. Delano Hill got snaps as the starter, and may have had a terrific practice without making a noticeable play. Doing your job can mean the ball never comes your way. Thompson, though, stood out and is looking more like a guy who has made significant strides since training camp last season.

Jamarco Jones gets my attention

It is early enough in camp that I often have to refer to my camp roster printout in order to identify a player who caught my eye. One such moment came when I had just finished watching a snap on one side of the field in 7v7 passing drills and scanned back to my left to watch a 1v1 pass rush snap. I did not catch the number of the player rushing, but what caught my eye was the grace and skill with which the left tackle kept the rusher from gaining any ground. The left tackle was #73, rookie Jamarco Jones. I settled in to watch the next snap and Jones once-again easily won the match-up. Later, when paired with undrafted free agent guard Skyler Phillips (#72), both players stood up their rushers until they literally stopped rushing no more than a yard or two from where they started. It is important to note that these are backups going against backups in most cases, but Jones could be a guy they use to push Germain Ifedi depending on what happens when George Fant returns.

One guy who keeps grabbing my attention just by walking around is Jacob Martin. He looks the part of an NFL athlete. With broad shoulders and a thin waist, he moves with a lot of power and grace. He has potential as a pash rusher and as a linebacker. I am eager to see him play in a preseason game.

Flowers was another player I wanted to watch in this practice. His unique size (6’3″) makes him an intriguing CB prospect. What I noticed was that he seemed a bit stiff. Corners need to have fluidity in their hips that allow them to swivel in any direction in an instant so they can mirror the receivers they are tracking. Flowers is not fluid in his swivel. He did not change direction as smoothly as you would like to see. That can be okay if you are powerful at the line of scrimmage. Brandon Browner is an example. Flowers did not show me a lot of dog in his tackling either. When doing simple tackling sled drills with the other defensive backs, he did not appear to relish hitting the way a guy like Browner always did, or even like some of the other DBs did in that drill. Finally, he looked uncomfortable in 1v1 passing drills, and got a lot of coaching on the sidelines. None of this is to say Flowers is a dead-end prospect. It did lower my expectations for what he can realistically contribute this season. Then again, it is very early in camp, so who knows?

The team did 2-minute drills for the first time, and one thing that stood out to me was C.J. Prosise getting starter reps in that drill. With Chris Carson looking like the starter at tailback, one would think 3rd-down might be the place the team looks to get reps from Rashaad Penny. Third down backs tend to be the same as two-minute drill backs. Seeing that Penny is starting camp behind both Carson and Prosise for those respective roles raises the question where he will see snaps. At this point, it would appear he would be the guy who spells Carson. That might look like 3-7 rushes per game. Not exactly great return on investment for a first round running back. All early days, though.

Griffin looked comfortable tackling in space and tracking players in coverage. His highlight was catching up to Nick Vannett after he caught the ball and stripping him to force a fumble that was recovered by the defense. Impressive play.

Stringfellow made nearly as many catches as Reynolds, but of a different variety. Stringfellow is 6’2″ and used his body nicely on a slant to wall off the defender for an easy touchdown in red zone drills. He also went high above Shaquill Griffin to pull in one sideline pass. He caught another down the opposite sideline. He certainly has the NFL body for a receiver. Very nice day for him.

Lockett had the play of the day in my opinion. Wilson lofted a fade route to the back corner from the far hash mark that Lockett made a beautiful adjustment to and caught over his shoulder for a touchdown. It was an impossible play. Wilson made a Dude Perfect throw, and Lockett made a Willie Mays catch. Lockett had a few other nice plays as well. He appears ready to step forward as the team desperately needs him to do.