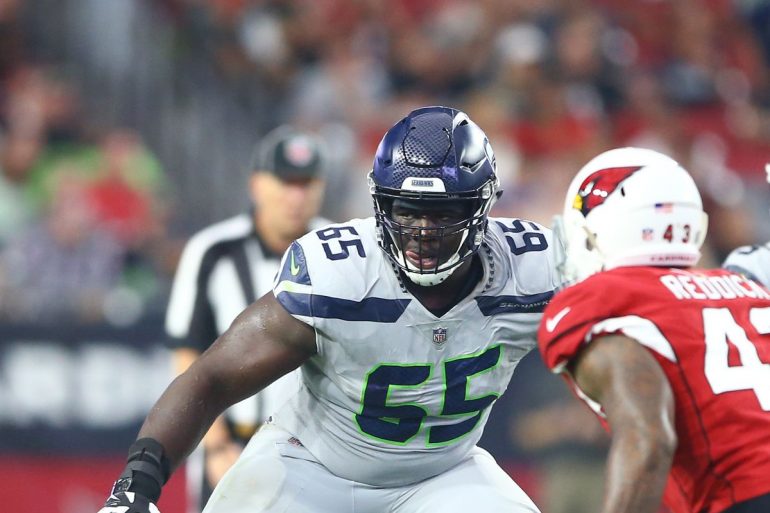 Breaking down a potential Ifedi extension

One player potentially falling under the extension radar is RT Germain Ifedi. With all the focus on extending major defensive contributors like Bobby Wagner and Jarran Reed, it wouldn’t surprise me to see the young offensive lineman receive a deal following the 2019 season. Drafted in 2016 and entering his fourth year in the league, Seattle recently decided to decline Germain’s fifth year option — which would have put his 2020 salary (and cap hit) at $10.35M fully guaranteed. Unless extended, Ifedi is slated to become a free agent after the 2019 season.

He began his NFL career struggling under offensive line coach Tom Cable — and continued that poor trajectory by leading the league in 2017 penalties. However, Cable was fired and the Seahawks brought in OL guru Mike Solari. Under Solari’s leadership, Ifedi has slowly begun to turn his career around. I don’t think anyone would call him an elite right tackle, but he’s growing and seems to be trending in the right direction.

With that said, let’s put some numbers behind our eye test. Here’s how Pro Football Focus ranked Ifedi over the last 3 years:

It’s clear that Germain has taken a step backwards in run blocking, but has made noticeable improvements in protecting Russell Wilson. In terms of ESPN’s pass block win rate, Ifedi and Jack Conklin both posted identical, above average pass block win rates. It’s debatable how much Ifedi has legitimately improved, but I don’t think there’s any question that he is generally trending in the right direction. It’s also important to note that Wilson can often hold onto the ball for way too long, making life very difficult for his tackles. It’s often speculated that Pro Football Focus over penalizes tackles whose quarterbacks tend to hold onto the ball longer than the average quarterback.

With that context in mind, what would a potential contract look like? Let’s first take a look at the top five highest paid right tackles:

Germain is 25 years old, so he’s definitely in the correct age range for a top contract. However, he has a very tenuous record — and the team clearly didn’t feel comfortable dishing out $10.35M in 2020 cap space to him, despite an abundance of cap room.

My sense is that Ifedi wants to be a top five paid right tackle, if not top three. Ja’Wuan James, who just signed a major extension with the Broncos, graded out worse in pass pro than Ifedi and signed for $12.75M APY. Just for fun, here’s how PFF grades Ifedi versus Trent Brown, who’s the highest paid right tackle in the NFL at $16.5M APY.

You can bet your booty Ifedi’s agent will be using these 2018 pass pro grades in negotiations (remember… passing is king in the NFL).

If we’re going purely off gut instinct and a combination of multiple factors (age — just turned 25, upside, draft status, a bloated OL market, and a reasonably productive 2019), I could see Ifedi signing something in the $14-16M APY range if he hits free agency. Here’s what a potential deal could look like:

In summary, I don’t believe Seattle should pay this. Welcome to the stage Jamarco Jones.