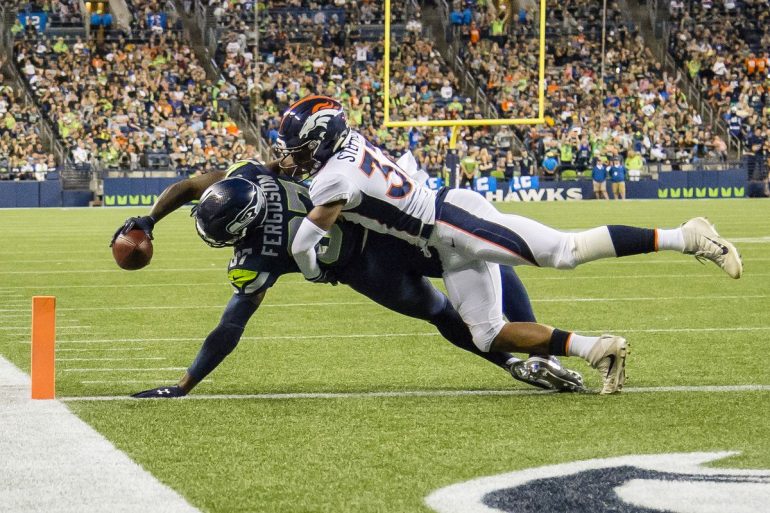 The Seattle Seahawks played their first preseason game of the 2019 season on Thursday night, beating the Broncos 22-14. We got our first glimpses of a team with a lot of new faces, many of whom saw extended action with regulars such as Bobby Wagner, Russell Wilson, Bradley McDougald, and KJ Wright not playing.

Brian Nemhauser (@hawkblogger):  Marquise Blair stepping forward to challenge for a starting role was a huge story coming out of this game. He looked like a Seahawks safety. He hit, he covered, he played the run, and pressured the quarterback. There was an intimidation factor that has been missing since Kam Chancellor retired, and a swagger that this defense desperately needs. Blair will make his share of foolish rookie mistakes, like he did when he blitzed in this game and left his area of coverage responsibility wide open, but the team has to live with those the way they did with Earl when he was a rookie. Let the talent rise.

Evan Hil (@EvanHillSea): My most notable takeaway was the special teams performance. For years we’ve been (correctly) criticizing the special teams unit — as they’ve seem to consistently let the team down in critical moments. Football Outsiders ranked Seattle 23rd in 2018 ST DVOA, 20th in 2017, and 15th in 2016. Suffice to say they haven’t been a great unit for several years now. If Seattle wants to make a deep playoff run, the special teams unit will need to be an above average group… and tonight was an early but positive indicator towards that.

Jeff Simmons (@realjeffsimmons): We’ve talked at length — both on the Real Hawk Talk podcast and certainly on Twitter — about the underwhelming Seahawks draft classes from 2013-17, but the early returns on the 2019 class has been very promising. That was my biggest takeaway from the Denver game. Obviously we need to consider the level of compeittion, but the group showed up very well in their first preseason game. Even with L.J. Collier banged up, Marqise Blair came as advertised. He was a ferocious hitter, aggressive, and offers far more intriguing upside at safety than Tedric Thompson. D.K. Metcalf made some plays and was a hair away from a huge night. He looks great. Ugo Amadi was comfortable and instinctual — both on defense and special teams. His game speed really surprised me. Like what I saw from Cody Barton as well. He’s been getting a ton of buzz in camp. And UDFA guys like Jazz Ferguson had a great first preseason game impression. And Terry Wright has some intrigue as well. Overall, there’s a lot of interesting potential out of this group so far, and that’s badly needed for a team that lost a number of key veteran players (Earl, Frank) coming into the season.

Nathan Ernst (@NathanE11): Football is back! It’s big dumb football, even by football standards, but it’s football. There were lots of nuggets to mine out of the first preseason game but my big takeaway is that our big dumb backup QB made this big dumb football game a whole lot of big dumb fun. Geno Smith is still probably the better QB but Paxton Lynch was undoubtedly the more interesting one. He’s huge, he’s got a big arm, he’s athletic, and he was fearless. After a first half of football that ended 6-3, Lynch’s rampage against the team that drafted him was a nice little reminder of why I spend so much time watching, talking, and writing about this sport. Here’s to more fun football games.

You can hear more thoughts about the first preseason game and all other things Seahawks on the Real Hawk Talk’s first of many post-game chats.