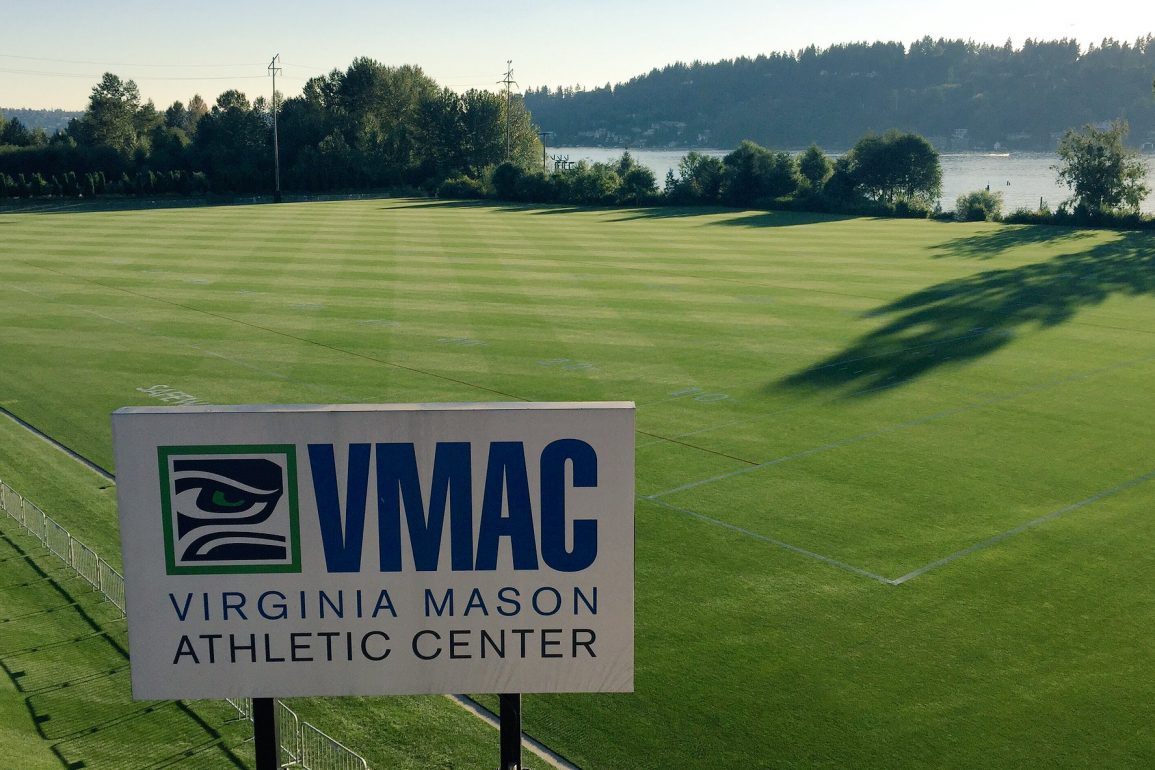 Poona Ford has himself a day

My very first note from practice today came during run drills where the front seven  defensive line and linebackers) go against the offense without receivers. The ball is snapped and Poona Ford somehow appears three yards deep in the backfield instantaneously, dropping Chris Carson for a loss.

The coaches and defensive players went crazy. Ford would go on to have a good day in pass rush drills where he bull rushed Justin Britt back into the quarterback and later drew an illegal hands to the face. As impressed as I was, apparently Britt was far more effusive:

Britt with high-praise for Poona Ford: “He has a chance to be one of the best nose tackles to have ever played. I don’t know many people better to practice against than Poona Ford.” #Seahawks

You don’t read that every day. Assuming Ford earns the starting role many expect him to win, John Schneider looks well on his way to another undrafted free agent gem.

Most folks have a hard time paying attention to special teams drills, but they are critical to gauging who has the inside track on making the final roster. Special teams play is often the deciding factor for the lat 3-7 guys who make the team.

For kick coverage today, the first string consisted of:

The second string had these players:

I did not get every player on the second team.

They also did gunner drills where players try to beat a double team downfield to reach the punt returner. Most guys were struggling to get to the target. One guy who looked dominant was Malik Turner. He split the double and then powered his way right to the returner.

The quarterbacks typically are off to the side throwing during these drills and a primary receiver is sent with them to run routes and catch passes. That was often Doug Baldwin. This year, it is D.K. Metcalf and Tyler Lockett (depending on whether Lockett was required for the drill). Metcalf certainly seems to be getting the star treatment, especially for a rookie.

Penny had a great cutback during the run drills for a big gain that probably would have gone for 40-50 yards in a game. He later had another cutback for a long gain. The second year back definitely looks fitter and faster than at any time last season.

After noting that Jennings did not make a play yesterday, I made a point to watch him more closely in this practice. He showed great focus and coordination in making a super tough catch with DeShawn Shead draped all over him. He had another nice catch in tight coverage against Simeon Thomas. These were in 1v1 passing drills. That is decidedly in the receivers favor given the lack of other defenders, but plenty of guys were not getting open or making plays. It was good to see Jennings run and catch with confidence.

Shaquem Griffin essentially played defensive end in college. He would stand over the tight end and rush the passer in many cases. Asking him to play weakside linebacker last year had him off the line of scrimmage and in space. He struggled and it never seemed like a good fit.

The team now has him playing the strongside linebacker role, which in this defense, stands over the tight end and can be used as a pass rusher. Very similar to what Griffin did in college. As a speed and pursuit player, Griffin looks much more like an NFL linebacker in this position.

He had two nice tackles for loss and is often getting into the backfield. Given how good he was on special teams last year, his chances of making the roster are increasing with his play at linebacker.

While the offensive and defensive lines were doing 1v1 pass rush drills, the rest of the team was practicing 7v7 in the red zone. My eyes darted back and forth in an attempt to watch as much of both drills as possible. It went a little like this:

And so on. Watching the defense show zero pass rush ability and weak coverage against two backup quarterbacks had me grimacing at the thought of how bad this defense might end up being.

To their credit, they did a red zone team drill right after with all the players, and the defense stopped all but one play. They also did well in the run drills as I mentioned before. I guess it depends on where you put your focus, but I have never seen a Seahawks defensive line do this poorly in a pass rush drill.

Jamar Taylor is one to watch

Jamar Taylor is a veteran corner competing for the nickel spot and he helped his case quite a bit today with a number of pass breakups. He covered Tyler Lockett perfectly at the goal line and had two more really gorgeous plays. It wouldn’t surprise me if he rises to the top of the nickel corner depth chart soon.

Ugo Amadi appears to be sticking to safety

I only saw rookie Ugo Amadi working at safety today. He was someone I thought could challenge for the nickel role, but the team likely is comfortable with their depth there for now and see their lack of depth at free safety.

Rasheem Green was a nonfactor

It’s getting a little late for Rasheem Green to showcase a step forward in his second season. He has some great physical tools, but I have yet to see him make a play of note. He did get his left arm wrapped during practice, so he may have been battling an injury. Either way, there is little evidence he is ready to be the breakout player this team really needs him to be.

Jamarco Jones as always impressed as a pass blocker. Today was no different. He faced Cassius Marsh in two straight plays and absolutely stones him both times.

What stands out about Jones is his ability to regain his leverage after initial contact. It is typical for offensive linemen to absorb the momentum of the onrushing defensive lineman and slowly be worked back toward the quarterback. Not Jones. He absorbs the hit and manages to anchor his feet to where he does not move back at all.

That is a big deal when it comes to creating a cleaner pocket and more comfort for the quarterback. The Seahawks have to love having him available for depth.

For the second straight day, Ferguson caught my eye. This time, he caught a pass over the middle and then executed a spin move worthy of a player half his size that left his defender grasping for air as he ran another few yards downfield.

I’ve been asking myself why a 6’5″ player with a somewhat bulky frame is not a tight end, and that play gave me a little peek into his athletic profile that aligns more closely with what you might expect from a wide receiver. He is playing with confidence and continues to be a practice squad candidate.

I hyped Thomas quite a bit yesterday based solely on his body style. I got to watch him play in pads today and the results were mixed. He does not get his head around on pass plays, so his chances of being a playmaker are pretty low. He did have a nice pass breakup while covering Ferguson deep down field. I did not love his body language or energy. He looks a little like he is going through the motions. I remain intrigued by his build, but his play on the field has to pop much more if he wants to make the roster.

Murray was newly signed and made the most of his first chance to play. He had a fantastic catch in the red zone drill, reaching back over his defender to snag a touchdown while getting pulled down (pass interference was called on the defender). He had another nice catch later, and shows a fair amount of quickness and athleticism.

Russell Wilson missed the first practice I can remember since he was drafted to attend the funeral of his grandfather.

Pocic has always done well in pass protection, and did so again today. He continues to take first team snaps in the absence of Mike Iupati, and looks to have a very good chance to make the roster.