Search
Home
Uncategorized
This short series will explore the much-discussed penalty situation for the Seahawks. Seattle has the second-most penalties in the NFL this year. Is it the coaching? Specific players? Just how harmful has this been? Are there any signs of improvement? All of these questions will addressed, and more.


The Series:
Part I – Pete Carroll’s Penalty History
PART II: Just How Bad Is It?
Seattle has committed 56 penalties for a total of 459 yards in the past five games. That’s an average of over 11 penalties and over 91 yards per game. If the Seahawks were to maintain that pace for an entire 16-game season, they would pile up 179 penalties and nearly 1,500 yards which would shatter the NFL mark set by the 1998 Kansas City Chiefs who had 158 penalties for 1,304 yards. Even if the Seahawks just maintain their season-long pace of 9.5 penalties per game, they will challenge the record for penalties since they are on pace for 153 on the year. That’s how bad it is.
I lied. It gets worse. Seattle is surrendering nearly three first downs per game to their opponents via penalties. On the year, they have given up 30 first downs to opposing offenses via penalty. That means that nearly 14% of the first downs allowed by the Seahawks defense have come via penalty. The NFL average is around 1.5. The 2010 Seahawks were at 1.3. This defense has more than doubled the amount of first downs surrendered via penalty.
Opponents have only given the Seahawks 15 first downs via penalty all year, half of what Seattle is giving up. That means that the Seahawks enter every game with a likely first down deficit of 1-2 first downs. That manifests itself in time of possession, points and field position. And the problem is getting worse. 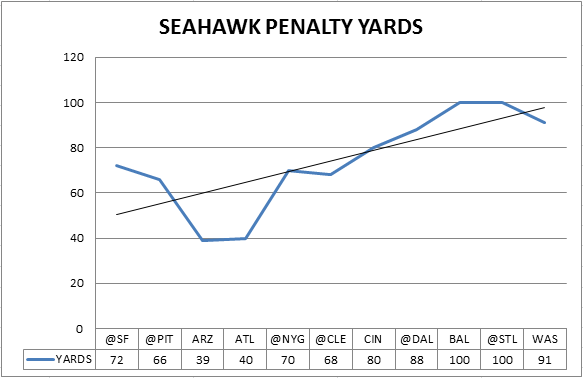 Lack of experience and youth certainly play a role in penalties, but there should be a trend towards improvement as the season wears on and those players gain experience with the refs and each other. That is not happening in most cases.

There is, however, some evidence that the coaching staff is a having a positive impact on penalties that the average fan would not notice. The Seahawks are worst in the NFL at false starts with 29 such penalties this year. That makes up a whopping 28% of all their penalties. Add in procedural penalties (e.g., illegal motion), offsides (defense), and delay of game and you see that over 40% of Seattle’s penalties are of the pre-snap variety. Pete Carroll has mentioned those as a particular point of emphasis, and saw some evidence of improvement in an otherwise lamentable game versus the Redskins. 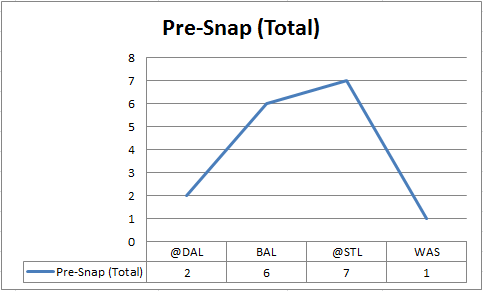 That is a significant change for the better. With a penalty problem on the scale the Seahawks are dealing with, it does not make sense to try and fix everything at once. Keep on eye on pre-snap penalties to see if those continue to be less common. That will at least be an indicator that this coaching staff can impact the discipline of the team given time.

The offensive line has seen an improvement overall the past four weeks as they only committed two penalties and zero holds. Many fans point to the secondary as a major issue. The reality is that the Seahawks have the 7th most defensive pass interference calls, tied for most illegal contact calls, and 14th most defensive holding calls. The illegal contact rank is a little mis-leading as the Seahawks have four on the year, and would drop 20 spots if they had two fewer. It’s not exactly an epidemic. Similarly, they have seven PI calls, and would drop into the middle of the pack with only a couple less. The issue is more the overall number of calls against the secondary. This would likely need to be the next place to focus for the coaches, but it may also be something that improves the most with more time as refs will give these corners more respect after their first year and the players will learn exactly what kinds of holds they can get away with and what they cannot. Remember, Brandon Browner played in a CFL that allowed contact all the way down the field. This is a legitimate adjustment period for him.

There is a direct correlation to the secondary penalties and the first down statistic above since illegal contact, pass interference and holding all result in an automatic first down. Address some of those secondary issues, and you should also see a drastic improvement in first downs yielded due to penalty.

The penalty situation has become something deserving of much more attention from Pete Carroll and the staff. They have shown some initial ability to impact areas they want to improve, but have a lot of work left to do.