the soccer stadium with the bright lights
This short series will explore the much-discussed penalty situation for the Seahawks. Seattle has the second-most penalties in the NFL this year. Is it the coaching? Specific players? Just how harmful has this been? Are there any signs of improvement? All of these questions will addressed, and more.


Pete Carroll is quintessential California. He’s Marin County born and bread, and reminds me a lot of a boss I once had who was born there as well. I used to joke that my boss saw the glass as four-fifths full instead of just half-full. Carroll shares that reputation as seeing even the most dire situation as glimmering with hope. That sort of reputation has fueled the belief that the Seahawks penalty binge this season is a result of Carroll’s easygoing approach. Either he runs an undisciplined practice or is unwilling to go negative when the team is not executing properly, or at least that’s what some believe. Others point to the youth and inexperience of this roster as being the primary cause of the penalty problem.

If Carroll, and his approach to coaching, is the root cause, it should be pretty easy to identify a pattern of penalty problems in his coaching history. 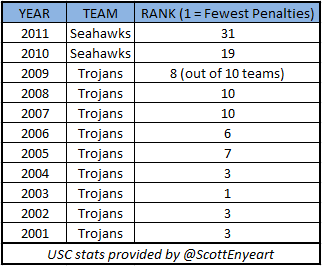 Carroll’s 2010 Seahawks team ranked 19th in the NFL in penalties. Not a stellar performance, but in the middle-third of the NFL. That, alone, seems to take a lot of air out of the argument that the terrible penalty problem this season is solely due to Carroll. Scott Enyeart provided Carroll’s USC penalty history to add some more color. His teams finished in the bottom half of the Pac-10 in each of his last five seasons. You could add the two years of Seahawks into that and make it a streak of seven straight seasons finishing in the bottom half of the league in penalties. Then again, his first four seasons at USC were stellar. What changed after 2004?

Enyeart mentioned that Offensive Coordinator Norm Chow and Defensive Line Coach Ed Orgeron took other jobs after the 2004 season. If the head coach is the general, the coordinators are lieutenants and the position coaches are sergeants. The general sets the direction and paints the objective, the lieutenants and sergeants are responsible for getting the troops prepared and executing the plan. Obviously, the head coach is responsible for picking his staff, but the staff has a bigger impact on how the players perform each week than the head coach.

Note that things did not get markedly better at USC when Lane Kiffin replaced Carroll as the Trojans ranked 8th last season. Enyeart notes that Orgeron was back last season as well. The Trojans are now back to 1st.

The evidence suggests that the head coach absolutely effects the penalty situation for his team, but there is no credence to the theory that Carroll’s philosophy is incompatible with fielding a disciplined team. It may be true that Carroll requires a certain type of staff to counterbalance his style, but not many people would argue Tom Cable is a big softy. His offensive line is among the most penalized in the league, and is also the least experienced and youngest. Being a hard-ass does not make a team disciplined. Holding people accountable and sweating the details does. Carroll needs to take a hard look at his history to find the truth of what has worked and what has not. He has success to draw on, but needs to face the issue and make it a priority. It’s no longer funny to talk about fining guys in practice and other guys winning the “penalty pool.” Blaming him for the penalty problem this season would be clumsy and simplistic, but a lack of improvement from here on out would be an indictment on him and his staff.

In the next few parts of this series, we will see evidence that the coaching staff may be making strides even if the overall penalty numbers don’t show it.  We will also look at who is committing the penalties to determine if it really is the young players or is more systemic.