If you have not already taken a spin through my seven-part positional analysis of the Seahawks, I recommend taking a moment to read those as the content will help you absorb the information in this post. This article will focus less on specific players, and more on matching up Seahawk needs with potential places to address them. For example, the Seahawks need a starting quarterback. Should they get him through free agency or the draft (or both)? Because of the funky way this off-season will unfold, the draft will likely happen before free agency. That means that the draft will have a significant impact on which positions the team decides to go after in free agency. That is the reverse of how things usually work, and will put more strain on the team to consider drafting for need instead of value. Here’s to hoping the Schneider/Carroll duo resists that urge. The Seahawks need another major influx of talent at multiple positions, so drafting for need would be a serious mistake.

Take a look at this overview of the team needs. Red means the Seahawks don’t have a viable player to fill that role, yellow means they either have a mediocre player or lack critical depth, and green means the position is relatively strong. Some will quibble with the grades given here. So be it. 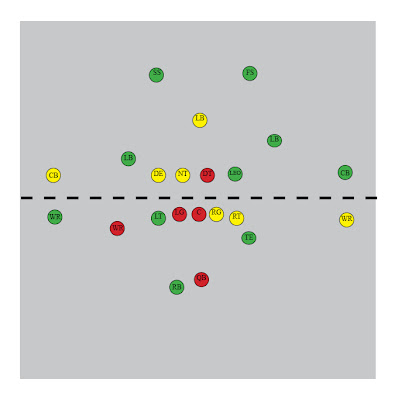 The team has needs all over the place. Most pressing is at QB, OL, DL and WR. CB belongs in the conversation as well, but comes in a notch below WR since Walter Thurmond is farther along than a guy like Golden Tate, and Deon Butler’s return from injury is undetermined. So what do you do with all these needs? Where do you spend your precious cash, and where do you use a valuable draft pick? The table below breaks out the position by free agent class and draft class. Green means it’s a good crop, red is bad, and yellow is so-so. A Seahawks helmet in the cell means the Seahawks should consider going that route to address a need. A helmet in both the free agent and draft cells means the team should explore both options. Note that I include QBs available via trade in the free agent row, which is why it’s green.

Positions like QB, and OL absolutely should add more than one player, and should utilize both routes to address needs. As I discussed in the QB analysis, the free agency route could be technically used to add two QBs, re-signing Hasselbeck and adding a veteran backup with more potential than Whitehurst. None of those moves should preclude the team adding a future prospect via the draft. It would allow them more flexibility in the first round to select for value if a terrific OL or DL falls to them, which is quite likely. If the QB they like falls to them in the 1st, that trumps all, and should be pounced on.

Offensive line, particularly guard is deep both in free agency and the draft. Pete Carroll says he likes some of the guys the team added during the season. It would be better to add a guy like Robert Gallery and draft a young hog to create a pile. The goal is not just to field a decent line. The goal is to build a dominant line for years to come. Don’t be afraid to create a strength by stockpiling talent at one positional group, particularly the lines. Defensive line starts with re-signing Brandon Mebane and rehabilitating Red Bryant. Neither of those things can be counted on, and the free agency market is thin, so drafting a DL is a near certainty. A 5-technique that can rotate with Bryant or a NT that can rotate with Colin Cole are crucial additions. Based on team need, weakness in free agency compared to OL and QB, and a good crop of DL, using the 1st round pick on D-lineman is probably the best bet. There are enough good offensive lineman who will be available in later rounds that the team can presumably wait. Again, though, if the team has the choice between a Pro Bowl guard in round one or near-Pro Bowl D-lineman, they need to go with the best value.

Wide receiver is one that will be determined by how things fall in the draft. The team might be able to add what they are looking for in rounds four or later. However, if they don’t find the guy they love, there are enough free agent possibilities that the team can roll the dice there. They also have their starting duo from last season returning, should be able to re-sign Stokley, and hope to develop Tate. That’s all without Deon Butler recovering. Best guess is a drafted addition here, but the team may choose to spend its big bucks on a proven veteran.

Cornerback is another good position in this draft. The available free agents are top-heavy. There are some great ones, but they will break the bank. The team would prefer to add via the draft here, but may look at a second-tier corner that would be an upgrade over Kelly Jennings if they find better value at other positions in the draft.

Lofa Tatupu’s understudy needs to be added. The team has so many needs elsewhere, that they could be forgiven for letting this slide one more year, but that could prove disastrous if there is another injury. Will Herring is a free agent, so depth at this position is thin. Drafting a linebacker is a near certainty.

Without knowing how the free agency rules will work, it’s impossible to predict how many free agents the team may add. They have the roster flexibility to be very aggressive, and I could see as many as four or five significant additions (including re-signing Hasselbeck and Mebane). When all is said and done, look for new starters at Center, Right Tackle, Left and/or Right Guard, and Cornerback. Important players will be added at QB (more than one), Nose Tackle, DE, and Wide Receiver.