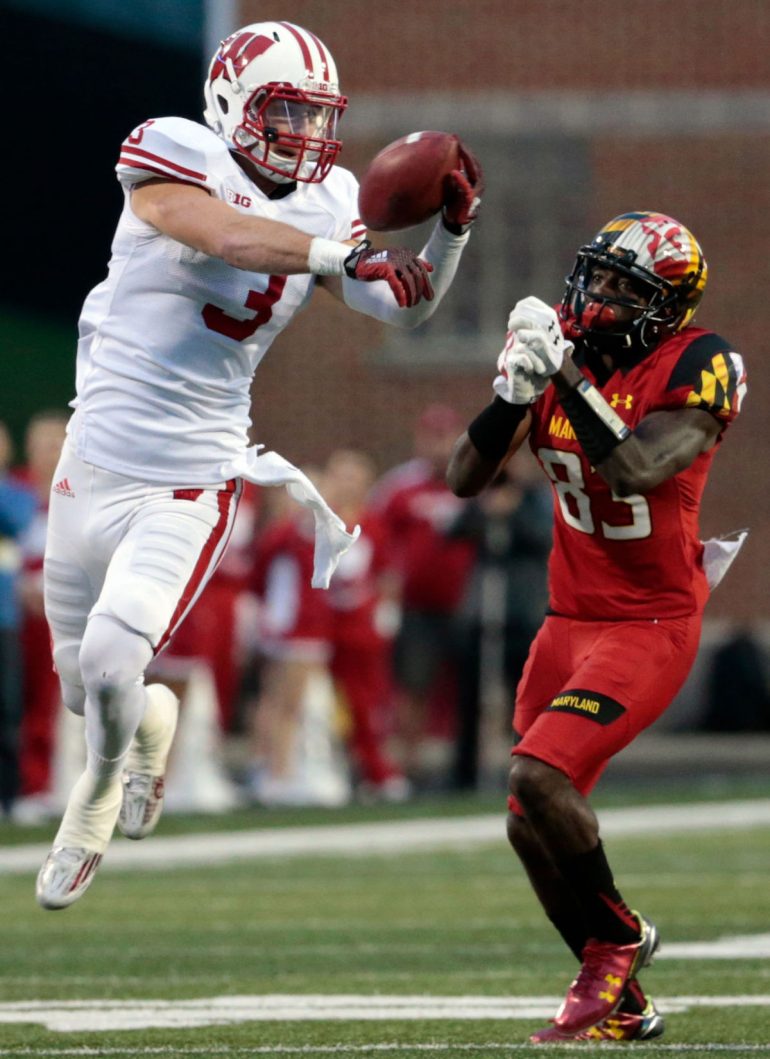 Pete Carroll and John Schneider have made a habit of defying NFL standards. Whether it be 6’4″ cornerbacks, or 5’10” quarterbacks, they have proven time and again that they have an eye for finding and utilizing unique talent. The two may have another trick up their sleeves as we enter the 2016 preseason. One can assume that 6’6″ safety Tanner McEvoy has never been particularly good at hiding, but that is exactly what has happened thus far as a member of the Seahawks 90-man roster. Should he make the 53-man roster, McEvoy would become the tallest safety in NFL history. Coaches and personnel men around the NFL can surely tell you why a safety of that height will not work. That is like a siren’s song to Carroll and Schneider. The two mad scientists in search of outliers are at it again.

McEvoy as versatile as he is tall Signed as an undrafted free agent from Wisconsin, McEvoy played quarterback, receiver and safety at Russell Wilson’s old school. He is an underwhelming thrower, but showed off his dynamic athletic ability while running the read option piling up 132 yards on 17 attempts as a senior. His fit at receiver was slightly better, catching 10 passes for 109 yards. Most scouts believe his greatest potential was in the secondary where he played safety and totaled 42 tackles, 1 sack, and 6 interceptions as a senior.

40-yard dash: Did not run due to knee tendinitis He was listed briefly on the Seahawks roster as a tight end before switching to safety for the time being. Pat Watkins (6’5″) is believed to be the tallest safety in NFL history. McEvoy would appear to be further evidence that the Seahawks are exploring new schemes to utilize different types of safeties, possibly to combat some of the league’s taller tight ends.

Brandon Browner was brought back to Seattle and was asked to switch from corner to safety. His role still remains a bit mysterious and will be one of the stories to watch during the preseason. The 6’4″ Browner is stronger than McEvoy, but is not as fast or agile. Do not be surprised if McEvoy is being deployed in the same manner as Browner when camp opens tomorrow.

He does not fit the mold of either Earl Thomas or Kam Chancellor as a base safety. His unique physical traits point to a more specialized role. One of the ways Carroll has stood out from his peers is by taking a player with narrow strengths and creating a role that accentuates those strengths while minimizing their weaknesses.

Browner was a perfect example of that in his past visit to Seattle as a cornerback. New Orleans found out how ineffective Browner can be when not operating in a system that gives him elite safety help over the top and allows him to regularly play press. It was never that Browner lacked flaws during his time with the Seahawks. Carroll simply knew how to hide them.

McEvoy comes in much the same way Browner did, with little fanfare. There is no guarantee that he will work out as well as Browner did, but it will be fascinating to see the process unfold.