Seattle will draft either #11 or #12 in the 2012 draft. The ideal situation would be for there to be enough great quarterbacks available that they could stay where they are and draft a guy worth of that pick. Early indications are that there are a couple QBs worthy of the Top 5, and scrum of players worth a look after #20. John Schneider and Pete Carroll have yet to trade up to get any player in their two drafts. They have traded back more than once. Both options merit consideration, but finding a willing trade partner will be key.

Assume that both Andrew Luck and Robert Griffin III are taken in the Top 5. Here are the teams drafting 1-5:

The Colts will certainly draft a quarterback, and trading for that pick is so far outside the personality of Schneider, it is not worth thinking about. The Rams are highly unlikely to draft a quarterback. Sam Bradford had a terrible year, but his coach and GM deserve a lot of the criticism considering the lack of talent they surrounded him with. You don’t give up on a #1 overall pick who won rookie of the year after one down season. The Rams know other teams will covet Griffin, and will probably be eager to trade down. The problem for the Rams will be that every team that wants a quarterback will know the Rams won’t be drafting him, so there’s little need to get their pick, as opposed to a pick after them. The combination of Rams need for offensive line help and the top-end offensive tackle talent available in this draft will make trading the pick that much less likely. Expect the Rams to hold their ground and take some non-quarterback.

Minnesota is a little harder to gauge. They just spent a high first-round pick on a quarterback (Christian Ponder) last season, but he was not spectacular. That team would have to be extremely high on Griffin to give up on Ponder so quickly. The things that work in the Vikings favor is that they don’t need to draft a QB, the team ahead of them definitely will not pick a QB, and the team behind them is the first real threat to take one. They become the most likely trade partner if Griffin is your target. They have enough needs that moving down a handful of spots to accumulate more picks is just smart management. It is also not out of the question for a team talking trade with them could end up with Ponder instead of the pick, allowing the Vikings to take Griffin. Either way, the Vikings probably help some team address their quarterback need.

If the Vikings do not trade, the Browns are the only team in the Top 5 with a legitimate reason to consider taking Griffin. Colt McCoy will be entering his third season, and did not progress the way most wanted. The Browns only spent a third-round pick on McCoy, so spending one of their two first-round picks on a quarterback is not unreasonable. Mike Holmgren still runs that team, though, and he has said multiple times that his philosophy on quarterbacks is that you pick a guy and stick with him. He picked McCoy. Taking a quarterback in the first-round means they are giving up on McCoy. It would be a surprise if Holmgren allowed that to happen. More likely, they use the rumor mill to put out the word that they are enamored with Griffin to drive up the trade value of their pick as much as possible. Some teams would believe the Vikings were interested in Griffin. Many more would believe the Browns were.

If a team was able to wait out the Vikings and Browns, and Griffin was still on the board, the Bucs phones would be ringing off the hook. The Redskins draft #6, and would almost certainly take Griffin. The Redskins, Dolphins (#8 or #9 pick), and the Seahawks (#11 or #12) are the teams who have the greatest need and the shortest distance to move up. Chances are, one of those teams will have signed Matt Flynn by the time the draft takes place. That would leave two vying for Griffin.

St. Louis is going to be less willing to deal within the division, and could be tempted to by the Redskins since it would only involve moving down four spots. Seattle and Miami know the Redskins will have a better pick to offer, and will need to pay a steep price to move ahead of Washington.

– 2008 Draft: New Orleans moves up 3 spots (#10 to #7) to take Sedrick Ellis. It cost them their 1st and 3rd round pick, but also got a 5th round pick back from the Patriots. So, swapping 3 spots essentially cost them trading their 3rd for a 5th.

Looking at these trades, and knowing the demand for Griffin, Seattle would likely have to surrender their second-round pick, and possibly a fourth to move up to #4 or #5. The other option would be to move down to the end of the first-round. That could net them a player like Ryan Tannehill, Kirk Cousins, Nick Foles, or whomever else catches their eye. In that scenario, the Seahawks would add at least a second-rounder, and probably a third. It is not out of the question that they could get another first-round pick next year. That would be very hard to pass up. Teams like the Lions, Giants, Saints, and Bengals could all be possible trade partners if the Seahawks choose to slide down the first-round.

Seahawks fans who want to see Griffin playing for Seattle should be cheering for the Redskins to sign Flynn. That would leave the Dolphins as the only true threat to move up for Griffin, and they may be as few as two picks ahead of the Seahawks. At that point, it’s simply a matter of desire. Throw in one more fourth or fifth-round pick than the Dolphins, and you should be golden. 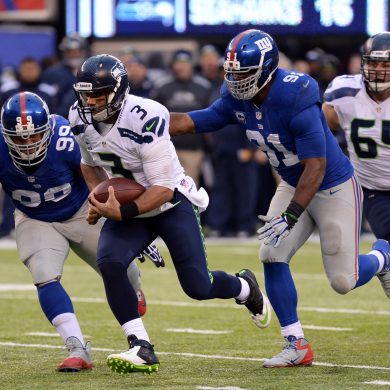