Seattle skyline mount Rainier plane blue sky north west city center downtown architecture corporations business working places outdoors modern landmarks Space needle tower trees colorful metropolitan cosmopolitan living skyscrapers USA picturesque post card d
Pete Carroll will reveal an area of emphasis from time-to-time in his interviews. In between the platitudes, he will mention something worth paying attention to. Chunk plays, or explosive plays, are defined by most as passes over 20 yards and runs over 10 yards. Getting those plays on offense and limiting them on defense is a key focus point for the Seahawks coaching staff. This is the last in a series of short articles exploring where the team is their pursuit of being explosive on offense and defusing on defense.

Chunk runs are generally considered those of 10 yards or more. NFL.com only has historical data on runs of 20+ yards, so we will use that for reviewing the Seahawks progress. It was surprising to see the Seahawks took a big step back in this category last season, considering their overall rushing output improved. They only had eight chunk runs last season, down from twelve the year prior. 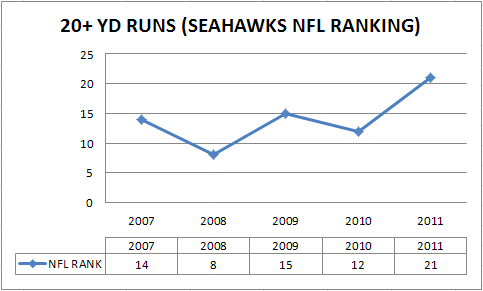 The Seahawks ranked 17th in explosive pass plays and 21st in explosive runs last season. That simply will not cut it. This becomes a key area for the team to improve in 2012. The addition of Robert Turbin, an improved offensive line and a player like Russell Wilson should make instant impact.