Green grass on blue clear sky, spring nature theme. Panorama or banner. Super high resolution, premium quality.
HAWK BLOGGER 2012 SEASON PREVIEW PART II: A Look Back At 2011
Before looking forward, it is useful to look back. The Seahawks went through a major metamorphosis in 2011. A roster that needed nearly 300 transactions in 2010, started to stabilize last season. It is hard to believe that the secondary was one of the major question marks before the year began. Lawyer Milloy was let go. Kam Chancellor had been little-used, mostly just as a short yardage safety, during his rookie year. He was thrust into the starting lineup. Nobody had heard of Brandon Browner. Richard Sherman started the year as a special teams player. A unit made up of two fifth round picks, a free agent from the CFL and a mid-1st rounder, enters this season as arguably the best secondary in the NFL. An offensive line that started the year with no two players having started a game next to the man beside him, ended the season clearing the way for the NFL’s leading rusher over the final eight weeks. There were memorable wins over quality opponents like the Giants and Ravens. Gone were the blowout losses. The team ended with the same win total, but everybody that watched the team knew how much better the team had become.

Seattle was the sixth-most improved team in the league by this measure. It is worth noting that San Francisco and Arizona were even more improved.

No stat may better capture the transformation of this team than the most basic of them all, points for and point against. Seattle spent the first half of the season being outscored by nearly eight points per game. They were

giving up over 23 points per game, which would rank 22nd in the league if they had finished the year there. The offense, meanwhile, was only putting up 15 points per game, which would rank 27th in the NFL if they had kept that up all year. Those numbers saw dramatic shifts in the final eight games. Seattle outscored opponents by almost nine points per game. Only four teams in the NFL posted a higher differential over the season. Yes, doing something for a whole season means far more than doing it for less, but half a season is not exactly an insignificant sample size. The degree of change was remarkable. Scoring was up 56% to 24.9 points per game, and the defense dropped opponent scoring by 29% to 16.3 ppg.

You can see the crossover clear as day when breaking out the scoring by quarters of the season. It is almost a mirror image. The scoring continued to rise all the way through the final four games, as the team averaged an impressive 26.3 points. The defense peaked in games 9-12, but was still holding teams to 17.3 during their 2-2 and final stretch. Seattle almost doubled up their scoring average from the first four games, where they managed only 14.5 points per game. Consider that Tarvaris Jackson was dealing with his injury that second half and that Sidney Rice was out for much of it as well, not to mention the offensive line injuries. Impressive.

They managed this transformation largely through three areas: (1) better running game (2) better turnover differential (3) weaker opponents. Take a look at how different the offense was from first-half to second. 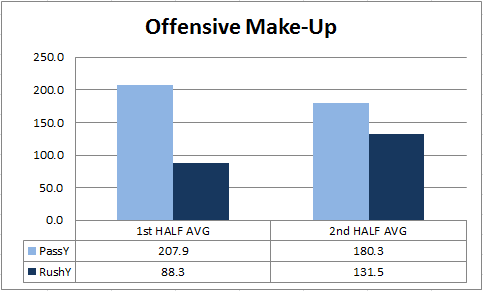 Seattle went from passing for 1.5X the yards they were gaining on the ground to within spitting distance of a 1:1 rushing yards-to-passing yards ratio. That was no accident. The Seahawks were averaging 35 pass attempts and only 22 rush attempts through eight games. When Pete Carroll and Tom Cable had their fateful post-game chat after losing to Cincy, things changed in the game plan. Seattle flipped the script and ran 34 times per game and passed only 28. 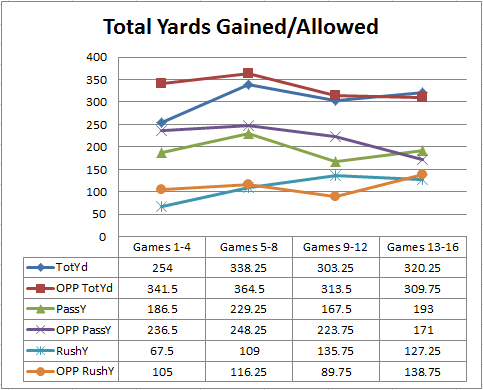 Try to look past the complexity of the chart above, and notice a few key trends. Seattle more than doubled it’s rushing yardage from the first quarter of the season, even with a slight dip toward the end. Take a look at the purple line with X’s marked on it. That is opponent passing yards. Seattle’s pass defense stiffened considerably as the season wore on. Allowing only 171 yards passing per game for that final quarter was impressive. It is also worth noting that opponent rushing yards spiked the last four games. The negative trend in opponent yards per carry was noted in my Cardinals recap. Interestingly, it was not until the final four games that the Seahawks averaged more total yards than their opponents.

Most of the improvement in pass defense can be credited to the insertion of Richard Sherman into the starting lineup. Opposing quarterbacks struggled mightily as soon as he started playing opposite Brandon Browner, but the team’s pass rush also played a part. Sacks never tell the whole pass rush picture, but you can see the team made a steady climb as the season progressed. They more than doubled the number of sacks they had been producing when the season opened. The league leaders in sacks this year ended with 50, which works out to an average of just over 3 sacks per game. Seattle was closing in on that as the year completed. Opponent sacks had been steadily declining, but took an uptick with all the injuries to the line.

It should come as no surprise that the improvement in the running game led to a shift in time of possession. Seattle was one of the worst three teams in the NFL when it came to TOP in the first half of the year. The below charts show how Seattle did in TOP during the first eight games and the final eight. Half, in this case, refers to the half of a season, not half of a game.

A big part of why the run defense weakened as the season went on was the amount of time they were on the field for the early part of the year. If the running game had not clicked when it did, and the pass defense had not improved so significantly, those opponent point and yard totals would not have looked nearly as nice in the second half of the year. 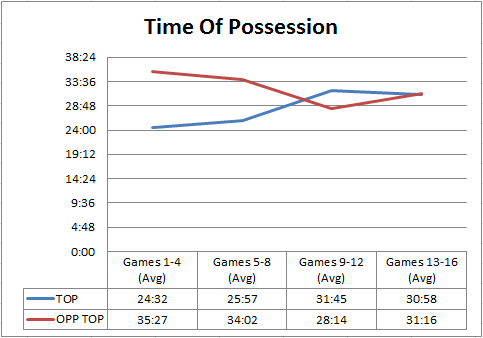 Running the ball is not the only thing that impacts TOP. Seattle significantly cut down on the amount of turnovers it was giving opponents, and drastically increased how many turnovers they were creating. They went from giving opponents nearly three extra possessions per game in the season’s second quarter to giving them only one in the last quarter. Their defense went from creating almost no extra possessions at year’s start to giving them 2-3 extra shots in the final half of the season. That obviously went a long way toward generating more time in possession, and less for the opponent. It also put the team in better position to score, or even turned into defensive scores that helped increase the point totals. 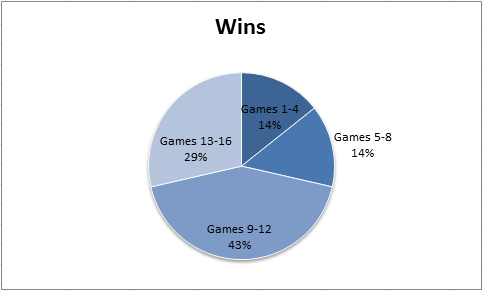 The team finishes the year with 1 win in each of the first two quarters of the season, 3 wins in the third quarter and 2 wins in the last quarter.

A BIG STEP FORWARD
Seattle climbed out of the NFL’s basement last season, and became mediocre. That may sound harsh, but it was a major leap from where the team was a year prior. The 2010 squad won in unorthodox, and largely unrepeatable, ways. Last season was built on a solid defense and an improved running game. Many things were repeated over the last half of the season. This is why the massive fluctuations from one game to the next were absent. The overall talent level on offense was not good enough to lift the team out of mediocrity, but as we will explore in the next part of the 2012 Seahawks Season Preview, there are many reasons to think the team has made the moves needed to challenge the best teams in the NFL.