Defensive backs take part of their traditional pregame huddle before taking the field for warmups.
Frank Gore was a major part of the game one victory for the 49ers. His 131 yards was his season-high. Gore is an integral part of the 49ers offense, who gains tough yards up the middle, but has a history of wearing down or getting injured late in the year. He averaged 4.9 yards per carry in the first half of last season, but managed only 3.5 in the second half, and was especially ineffective in the playoffs. That trend may be happening again in 2012. 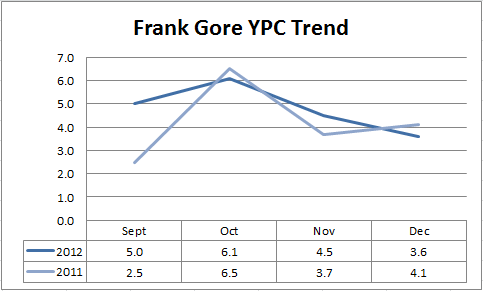 Gore exited early in that first game against Seattle with an injury. He has not broke 100 yards since. One thought was that the emergence of Colin Kaepernick in the running game was stealing carries from Gore, but that is not the case.

The table above shows Gore is actually carrying the ball more in his last seven games, but is getting far less from those carries. The injury to Kendall Hunter could have teams focusing more on Gore, or he may be wearing down again late in the season.

Gore will bring his best to the game in Seattle, but the Seahawks defense will play him as physically as any defense he has faced all year. Every hit they get on him Sunday could reduce Gore’s effectiveness in the playoffs.