The Morning After: Seahawks Sneak By Packers 17-10

Logo Contest: The Morning After series runs everyday after a Seahawks game, and I’d like to add a logo to represent the series. The logo should incorporate both the name Hawk Blogger and The Morning After. Please send me your submissions at [email protected] before the regular season begins. The winner will get their name and Twitter handle or website attributed on each Morning After article. Below is the leading candidate thus far, but I will consider new submissions for the next week or so. 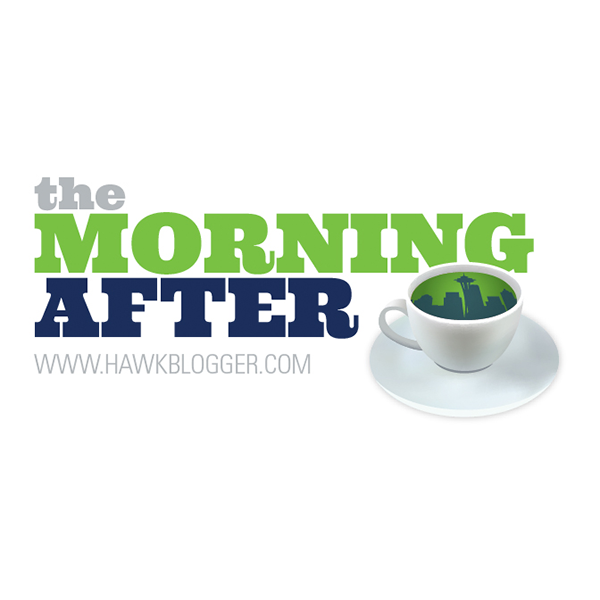 The Seahawks nearly out-gained the Packers offense in penalty yards (182 – 201), turned the ball over twice in one half, were 0-2 in the red zone, and gave up four sacks. All that, and they won on the road 17-10. Winning this game was far less meaningful because Packers head coach Mike McCarthy pulled quarterback Aaron Rodgers after one series. Taking out arguably the best player in the NFL does tend to affect the outcome. Seattle’s defense did play terrific football much of the night, limiting their third straight opponent to 10 points. Who is to say Rodgers would have improved on his opening drive that saw him only average 5.9 yards per attempt and ended in a field goal? Certainly Russell Wilson would have liked to leave the field after his sparkling first drive that saw him complete all his throws. He would not approach that precision the rest of the way, in what may have been his least impressive performance since the first half of last season. Much of that was due to being harassed by Packers defenders all night, and much of that was due to Green Bay blitzing so much during a pre-season game where the Seahawks had done little preparation. All these factors made for a very challenging game to analyze, but a few things were crystal clear.

Michael was a threat to go the distance every time he touched the ball Friday night. He managed to find the end zone on one 43-yard sprint, and had four plays of over 10 yards overall on the way to 122 total yards on 12 touches. That is an average of 10.2 yards every time he got the ball in his hands. This guy is explosive, and has big-play ability that nobody else in the back-field possesses. Marshawn Lynch is the second-best back in the NFL, according to a variety of analysts, but he is built for the bash more than the dash. It is far more common to see him run through a defender than run away from one. Michael’s ability to score from anywhere on the field adds a dimension the Seahawks have not had in the back-field since Ahman Green. The two may also share a fumbling problem, but time will tell on that. This performance again raises the question about Robert Turbin’s future. Turbin could gain 1,200 yards as a starting running back for this team, and probably another 200 yards receiving. He is a good back. Michael could push 2,000 yards on the ground, and possibly another 200-400 yards through the air. Their performances last night were pretty indicative of what they are capable of. Turbin finished with 10 carries for 50 yards and 4 catches for 22 yards. Good stuff. Michael had two fewer touches, and gained 50 yards more. Better stuff.
The most likely scenario has Turbin on the roster come the regular season, but a possibility gaining some momentum would have Seattle look for a trade partner that would surrender a 3rd or 4th round pick for Turbin and allow the Seahawks to keep Michael on the active roster each week while also keeping Spencer Ware. It is hard to fathom Michael sitting inactive week-to-week.

Tony McDaniel is going to be important

McDaniel did not play a ton, but played well when he was in there. He showed in the game what I had seen in practice numerous times. There are moments where he is unblockable in the run game, and he gets a terrific inside push on passing plays. His tackle for loss came when he blew through a double-team to bring down the runner four yards deep behind the line. Later, he got within a few feet of the quarterback before extending his arms and batting down a pass on third down. Seattle’s front office would probably like to keep cheaper and younger players that could be under club control for longer, but doing so at this position would be a serious mistake. Jordan Hill, Jesse Williams, and Jaye Howard are simply not the player McDaniel is, and are questionable starters right now. This Seahawks team does not do questionable starting talent. One alternative could be keeping Clinton McDonald to play in McDaniel’s early down run defending role, but McDonald is not the playmaker that McDaniel looks to be. Picturing Mike Iupati and the interior of that 49ers line coming to town in week two should provide all the inspiration the front office needs to keep McDaniel around.

Stephen Williams does it again

Most observers will point to Williams making another contested catch on a deep ball for a touchdown as his best play versus the Packers. There was much to like about seeing Williams prove he could do that yet again. It was his other catch that should excite fans the most. Seattle faced a 3rd and 16 near mid-field when Wilson hit Williams on a short crossing route to his left. Williams raced across the field and turned the corner to get 16 yards and a first down. The Packers defense was stunned. They thought they had Williams bottled up in front of them, and were going through the motions of cutting off his angles when they realized Williams was a lot faster than most 6’5″ men. Deep threats are great. They also have limited utility. Williams is more than just a deep threat, and showed in the game what he has been doing in practice.

The penalty situation is inexcusable

Penalties have come up as an issue in each of the last two seasons. They are already an issue this year. The silver lining is that the flare-up in preseason allows the coaches to drive home some lessons when the games do not count. This game leaves the impression the coaches are not getting the message through. J.R. Sweezy looked like a Breno Giacomini clone diving on a pile well after the play was blown dead. John Lotulelei had as much to do with the Packers touchdown drive as anyone wearing green and gold when he speared the running back late after he had already been brought down for an 8-yard loss. Will Blackmon and Richard Sherman had tough interference calls go against them after one tripped and the other appeared to play perfectly while making a highlight-reel interception. The offensive line was the major culprit, and a good deal of those holding calls were at least partially related to not game-planning for the Packers blitz scheme. That is an excuse, though, and there really is no excuse for 14 penalties and 182 yards.

Eddie Lacy was a beast last week in St. Louis. He was trucking players left and right on a quality Rams defense on the way to 40 yards on 8 carries and 5.0 average. He ended last night with another 8 carries, but his -5 yards was not quite as impressive. Seattle bottled up the Packers run game exceptionally well most of the night. There was one point where Green Bay had 42 yards rushing and 39 of those were from Vince Young scrambles. Running backs carried the ball 19 times for 32 yards and a 1.7 YPC. The Packers are not known for running the football, but it was good to see players like Red Bryant, McDaniel, Brandon Mebane, Bruce Irvin, and Bobby Wagner makes plays in the back-field.

In the home stretch

Seattle will welcome in a familiar face in Matt Flynn next week, who is again fighting to keep his job as the regular season approaches. People like to talk about whether the great SEC teams like Alabama could hang with the worst NFL teams. There is very little doubt in my mind that the Seahawks second team could thrash the Raiders starters. If there is a less talented roster in the NFL, I have not seen it. The Seahawks will probably allow Zach Miller and Sidney Rice to play one series just to experience some live hitting before the season begins, but don’t look for much more than that from the starters. Roster cuts to 75 players will happen on Tuesday, and then to 53 on Saturday. The opening act is nearly complete. The show is about to begin.
Start typing to see results or hit ESC to close
softy real hawk talk russell wilson 49ers rams
See all results