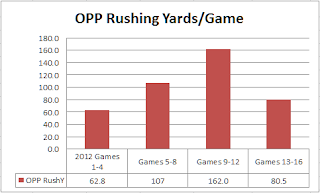 Pete Carroll’s first two significant moves on defense when he arrived was to put Red Bryant on the edge as a defensive end and to put Aaron Curry right night to him as a SAM linebacker. One player earned a hefty new contract. The other recently retired. Both moves were done with an eye on slowing the opponent run game, priority one in any defense. The results were initially dramatic. Seattle became one of the toughest teams to run on in the NFL early in 2010 until injuries to the defensive line crippled them. The formula appeared sound, though, and played out terrifically in 2011 when Seattle finished 4th in the NFL in opponent yards per carry. That run dominance coupled with an emerging secondary set the team up for a great 2012, but a terrific start decayed to some of the worst rush defense performances of the Carroll era. Opponents averaged a soul-stomping 162 yards rushi 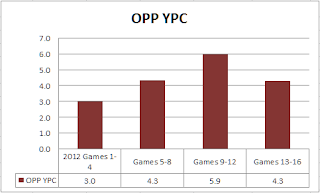 ng per game and 5.9 yards per carry during one four game stretch. Allowing opponents to run roughshod over your defense is not generally considered a wise strategy if winning is the goal. Yet, Seattle did exactly that in 2012. They lost only one game in the last eight, despite inferior run defense.

In fact, the Seahawks miraculously surrendered fewer points (16.1 ppg) in games when they allowed opponents to rush for more than 4.0 yards per carry than they did (16.6 ppg) when opponents averaged 4.0 ypc or less. The odds are against that phenomenon continuing. Seattle’s run defense is the biggest question mark on the team, not the pass rush as many would default to. The team had trouble defending the run last season, and have only added Tony McDaniel to the mix in a role that would have impact on run defense along the defensive line. No aspect of this team has a wider spectrum of possible results. Seattle could finish with a top five run defense, or it could be what keeps them from contending. Teams like San Francisco and Houston will surely test the middle. Look for the front office to continue tinkering at defensive tackle to find a player who can stand up at the point of attack.

Only a secondary as talented as this one could have held opposing quarterbacks to a 71.8 passer rating (3rd in the NFL), and 6th-fewest passes over 20 yards (40) last year given the mediocrity of the pass rush. It was a truly elite performance. The 2010 squad gave up an 89.7 passer rating and a 31st-ranked 71 pass plays. Gone are the days when Seahawks fans needed to cover their eyes when tall receiver lined up across from Seattle cornerbacks. The team took a page out of their run defense approach and took players that normally would be found roaming the middle of the field, and put them on the outside to lean on receivers. The result has been stunning. All four players are Pro Bowl-caliber, and each has All-Pro potential. The only thing holding this group back from completely dismantling opposing offenses is a consistent pass rush. The front office made numerous moves with an eye on improving that part of the team. Results were mixed in pre-season. The goal here should be a Top 10 finish in sacks, and the best opponent passer rating in the NFL (likely sub-70.0).

Red Bryant is due a $3M roster bonus in 2014, according to Overthecap.com. He better plan on earning it this year, because it is far from a given at this point. He is the closest thing to a dominant player on this line when he is at his best. The wreckage he causes in the run game is Justin Smith-esque. He was not the same player last season, but has looked great in practice so far this year. Pre-season games were not as encouraging. His partner in crime, Brandon Mebane, was dominant early in 2012, but wore down considerably as the season went on. There is questionable depth behind him at nose tackle this year, so that will be something to watch again. McDaniel could be a monster addition if he can stay healthy, something he has not done much in his NFL career. Should McDaniel go down, this run defense may go down with him. Seattle traded for D’Anthony Smith from Jacksonville late, so there is no way to evaluate his ability to help the team.

Michael Bennett was a surprise free agent signing, and immediately becomes the most disruptive player on the line. He can play LEO or 5-tech, but his most impactful position is 3-technique in the nickel defense. He is lightning quick off the ball and tenacious. He should be the biggest different in generating pressure along the line. Cliff Avril is a speed edge player, but has been injured. He only rushed from one side of the line in Detroit, so his lack of practice rushing from both edges in training camp is a concern. He knows how to get to the passer, and appears to be a pro in terms of preparation and technique. Chris Clemons coming back quickly from his knee injury last season is a huge bonus. It is not hard to argue that Clemons return is a bigger gain to the defense than losing Percy Harvin was a loss to the offense. Jordan Hill is a try-hard interior lineman that has great hands, and should assist in pass rush rotations. Benson Mayowa is a talented diamond in the rough that flashed in the pre-season, but needs to prove he can make an impact versus NFL starters. The embarrassment of riches in terms of edge rushers and disruptive interior players means the pass rush can only improve.

Remember when half of the defenses cap number was dedicated to Lofa Tatupu, Leroy Hill and Aaron Curry? The combination of Malcolm Smith or Bruce Irvin, Bobby Wagner and K.J. Wright make around $2M combined. Wagner has the look of a guy that is going to make a major step forward after nearly winning the defensive rookie of the year last season. He had 11 “impact” plays in 2012. I define an impact play on defense as tackle for loss, interception, forced fumble or sack. It would not be shocking to see that number climb to 18 or more this year. Wright is in a key season where he seems to have plateaued as a solid, but not Pro Bowl-caliber, linebacker. His contract can be extended after this season. I doubt that happens if his play does not show a marked improvement. Wright looked primed for a breakout season last year, but it never materialized. He is in a prime position to put up big numbers as the WILL this year, but has not looked comfortable there so far.

SAM is the town bicycle of this defense. Everyone is taking it for a ride. Bruce Irvin is the presumptive starter, but Smith will get a lot of snaps there, as will O’Brien Schofield. Irvin looks promising, but his tendency to follow the ball instead of maintaining the edge to contain cutbacks could prove his undoing in run defense. Schofield looks like a great get off waivers, and should factor into the game plan at both SAM and LEO regularly.

There may never have been better depth at linebacker than what Seattle breaks camp with this year. Allen Bradford is a starting caliber MIKE. John Lotulelei will be one of the best special teams players on the squad, and may be an eventual starter at WILL. Mike Morgan can backup all three linebacker spots and play LEO.

There will be no free passes against this secondary. They are smart, fast, physical, and oozing with confidence. The only thing closer to NFL wide receivers than their new Nike jerseys will be these cornerbacks. Do yourself a favor and spend a few plays following each of these corners, regardless of where the ball goes. They are both influencing the outcome of more snaps than most realize. Brandon Browner looks ready to return to the Pro Bowl, and Richard Sherman has a real shot at defensive player of the year honors. Earl Thomas is the most valuable player on the defense. He has the potential to be the best safety in all of football, and earned 1st team All-Pro honors last season to prove it. The missing ingredient is impact plays. He has effected the game largely by eliminating throws from quarterbacks. It is hard to truly shine when teams throw away from you. The great ones find a way. Thomas enters his fourth season needing to up his game to the elite level. Kam Chancellor made a ton of plays in 2011, but faded last year. His impact plays were down. The hope is that surgery for bone spurs in his ankles in the off-season will help him return to form. Walter Thurmond III represents the single biggest upgrade at any position on the team, offense or defense. He is replacing Marcus Trufant as the nickel corner, and has greatness ahead of him. Byron Maxwell and Jeremy Lane are starting-caliber corners for many NFL teams. Just not this one.

Special teams will be the Seahawks secret weapon in 2013. Steven Hauschka has been nails all training camp, and Carroll appears more willing to let him kick field goals beyond 50 yards. Jon Ryan is always dependable, and the coverage teams look stellar after being among the best in football last season. This group could be the difference in a very tightly contested NFC West.

Savor every moment this defense takes the field. It already belongs in the conversation with the best this franchise has ever had to offer, and has the potential to be the best in the NFL. They were, by almost any measure, a top five defense last year. They return with significant reinforcements, experience, and added confidence. Repeating as the best scoring defense in the NFL should be the goal, with an improved performance in pass pressure and takeaways. The Achilles heel for a seemingly impenetrable unit has been quick, ball-control, passing games. Disruptive pressure up the middle will be key to interrupting that rhythm, as will effective press coverage on the outside. Teams will struggle to go over the top with big plays. It will require discipline over the full length of the field to end up with points, and the length across the board will make red zone offense even more challenging. Defensive line play will determine the upside. If Irvin, Schofield, Clemons, Avril, Bennett, Hill, McDaniel and others can wreak havoc with a four-man pass rush, the sky is the limit.