The 49ers have become a better rival. They can be despised without losing sight of just how good of a team they are. Their front seven is the best in football. Justin Smith is the closest thing there is to a ManBearPig in the NFL. He swats entire sides of a defensive line to the ground to clear the path for silly-haired Aldon Smith to charge after the quarterback. And we have not even talked about Ray McDonald, Patrick Willis, NaVarro Bowan and the rest. Look out for Ian Williams at nose tackle, who replaced Isaac Sopoaga. Williams looks like another terrific line prospect that could improve the performance of an already dominant unit. They add the best offensive line in football on the other side of the ball to create the most physically dominant team in football. No other team in the NFL comes close to matching the physical nature of the Seahawks, and San Francisco has been a far more consistent team home and road than Seattle in recent years. They are not, however, without weakness.

Their secondary is a legitimate question mark. Pro Bowl safety Dashon Goldson moved on to greener pastures. Chris Culliver is out for the year with an injury. Rookie Eric Reid will start at safety, and even the great ones get fooled as rookies. Corner depth is paper thin, but they are hoping Eric Wright can return in a few weeks to improve that position. Their offense has one of the worst receiving corps in all of football. Anquan Boldin is a favorite of mine, but he is not a guy that can thrive as the only talented option. Quinton Patton would appear to be one name to watch here. He looks like a young receiver that knows how to run a decent route and get separation. Colin Kaepernick does not need great. He just needs players that can catch the ball when it hits their hands. The 49ers special teams coverage units were a problem last year, and did not look improved in the pre-season. They lost Ted Ginn Jr. in the return game, but gained a reliable kicker in Phil Dawson.


People will sleep on the Rams at their own peril. Jeff Fisher is a coach that gets the most out of his talent. Sam Bradford was a #1 overall selection for a reason. He has been saddled with a poor offensive line and terrible receivers, but his front office gifted him Jake Long at left tackle, Jared Cook at tight end and now has Chris Givens and Tavon Austin as receivers. The loss of Steven Jackson will be bigger than St. Louis fans will want to admit. The running game will suffer, and that limits this teams upside. Bradford has been a career short-tosser, with a yards per attempt around 6.0 for his career. The pre-season saw that jump to over 10.0 YPA. This could be a very different offense than we have seen the past few years. And this defense belongs in the conversation with Seattle and San Francisco. Their defensive line is the best combination of young and talented in the division. Chris Long, Robert Quinn, Michael Brockers and the rest bring it from inside and out. James Laurinaitis is a Pro Bowl-quality linebacker and the secondary is easily the second-best in the division, and could be the second-best in the NFL by the end of the year. Nobody played Seattle tougher last year than the Rams. This team could be on track for 10+ wins this year. They just are not quite as complete or as experienced as Seattle, and their quarterback is not capable of taking over games the way Russell Wilson or Kaepernick can.


What to make of the Arizona Cardinals? Carson Palmer makes the team significantly better. They have a new coach and new coordinators. Patrick Peterson is in the conversation for best athlete in the division, and Larry Fitzgerald still does magic on a weekly basis that rivals anything you would find in a Vegas show. Their defense was great, but the loss of coordinator Ray Horton should not be underestimated. As much as Palmer should help the offense become respectable, the defense only needs to regress slightly for this team to get throttled in the toughest division in football. Getting to eight wins would be a huge accomplishment in a transitional year. Fitzgerald is getting older. There is no young quarterback in the wings, and Darnell Dockett’s time should be winding down. It could get really ugly in Arizona once again in years to come. 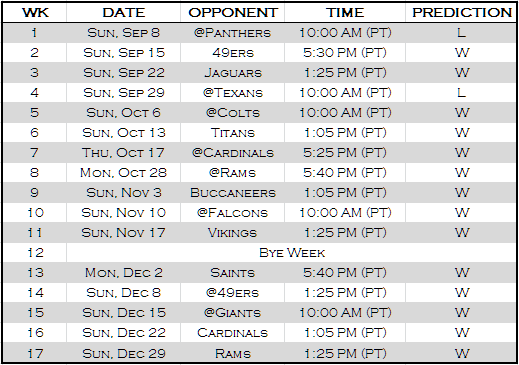 Predicting NFL seasons is silly. Take a look at my past performances. Injuries, weather, and a host of other variables will randomize the outcomes beyond what any human can anticipate. Forecasting anything but a memorable season from this group of Seahawks would be shameful. It is uncomfortable having so many national analysts picking Seattle for great things this season. We are more accustomed to being disrespected and having the benefit of anonymity for stealth attacks up here in the Northwest. The Seahawks do not need the element of surprise. They need not fear 10AM starts. They are the best team in football. Every time they step on the field, they should win. No game is out of reach for them. This was a team that rarely trailed by more than seven points at any time in a game, let alone lose by more than one score. They were behind 14-0 and 20-0 on the road in the playoffs, and came back to take the lead both times. The offense can beat opponents on the ground, in the air, and with a variety of players. No team in the NFL will add a better player than when Seattle gets Percy Harvin back in December. Even without him, they will be among the best scoring teams in football, and could be the best.

A defense that was tops in the league in holding opponents scoring down, will be better at pressuring the passer and will have an improved secondary that no longer has a weak point at nickel corner. Yes. there are question marks in terms of health and run defense, but the odds of being the best defense in football are better than the odds that the unit slides out of the top ten. And the special teams will again rank among the best in all of the NFL.

Superstitious Seahawks fans should stop reading right here. This is the best team in the NFL. They have the potential to have the best offense, defense and special teams. Teams that good win. They win a lot. This team has 16 win talent. They could also be 0-2 after two weeks. Predictions are silly. False humility is just as pointless. Seattle has never fielded a team this good in any sports to start any year. It is a time to savor, not a time to fret. Act like you have been there before Seattle, because there is every reason to think you will be seeing your team on the cover of Sports Illustrated again, only this time it will be in February.