First and Crown Fantasy League: The Royal BALTYs Reign On 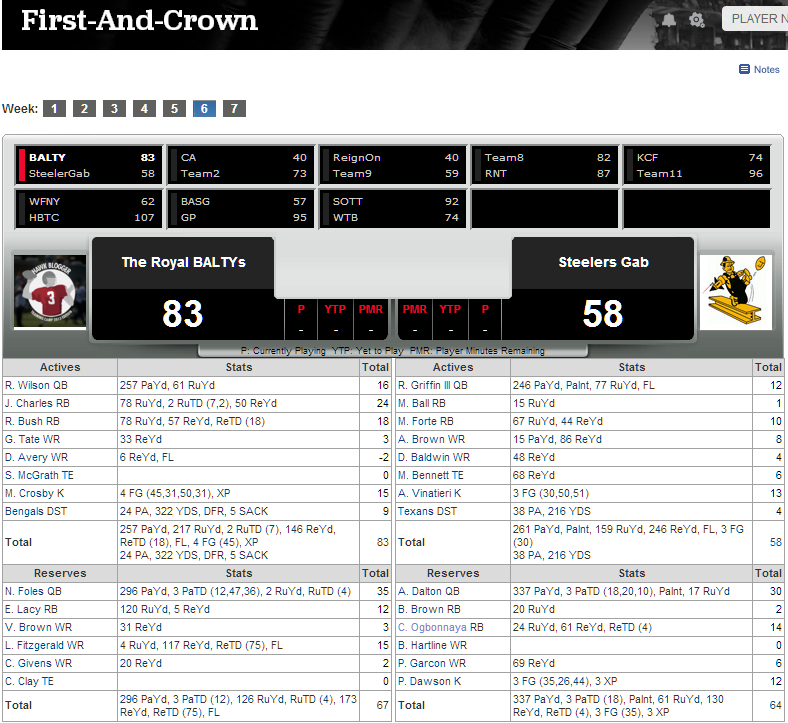 It had been a rough season for the BALTYs, who started out 1-3, but have managed to climb back to 3-3 after a two-game winning streak. The dual threat at running back of Reggie Bush and Jamaal Charles has been powering a very consistent group, but the weakness at wide receiver is a killer. With a great back like Eddie Lacy sitting on the bench and gaining value, it may be time to trade one of the three backs to upgrade the receiving corps.
My compatriots have been reluctant to make a move, so we will see where things go in the coming weeks. Injuries to Julius Jones, Randall Cobb, DeMarco Murray and others should have some folks ready to entertain my offers, especially since I am including Larry Fitzgerald (no division opponents on this squad!).
I picked up Joseph Randle on waivers, who should benefit from Murray’s injury, and Jarrett Boykin, who should be a new target for Aaron Rodgers with the Cobb and James Jones injuries. As I write this, there is a trade offer on the table that would get me Eric Decker and Jermichael Finley for Randle and Bush. Very tempting. Finley is probably going to pop given the receiver injuries on the Packers.
I countered asking for AJ Green instead of Decker. Seems like a buy low opportunity on two premium players with Finley and Green for two buy high players in Bush in and Randle. Always tough, though, to trade away running backs for receivers.
My plan to pick a new GM for the BALTYs has fallen by the wayside. I just haven’t had time to set people up each week. All the folks that GM’d in the past will get some Crown Royal swag. I promise! Any prizes I win will still be given away to readers. Keep your tips coming, and maybe we will Reign On together by season’s end!
Start typing to see results or hit ESC to close
softy russell wilson real hawk talk 49ers cardinals
See all results
More Stories