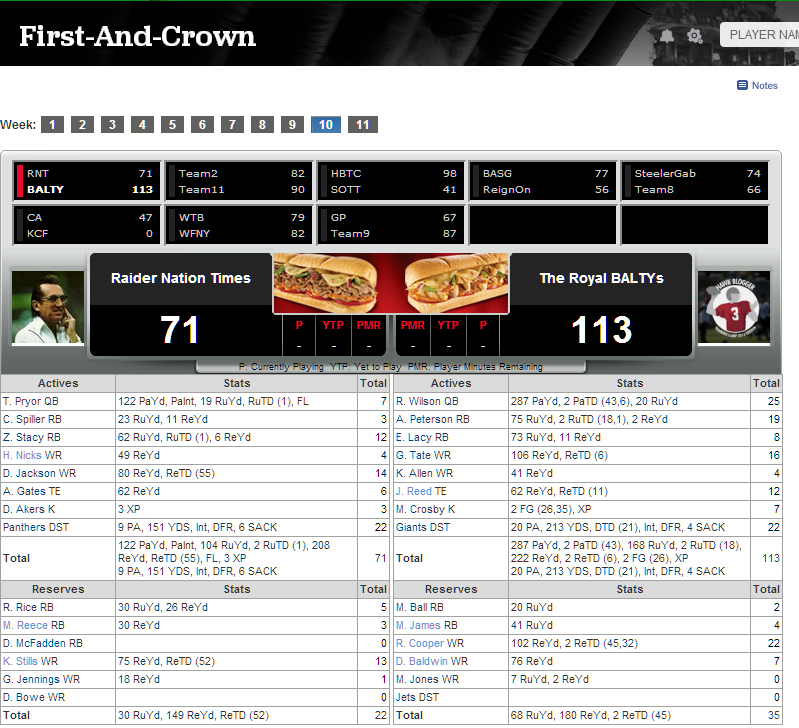 This series is published in partnership with Crown Royal. I am participating in hopes of winning some prizes I can give away to my readers. Keep an eye out for these posts and related tweets for chances to win.

It has been a rough couple of weeks for the BALTYs. After a three-game win streak saw the team get over .500 for the first time, a two-game losing streak followed. The team has been challenged since making a big deal that included Jermichael Finley the week before he was injured. The hole at tight end has been nasty, with guys like Delanie Walker and Ben Watson filling in. The void at wide receiver from earlier in the year, that regularly saw played turn in performances under five points, has been largely addressed with a bunch of mid-tier players. I decided to try and turn one of those players into a more dependable tight end.
Aggressive offers were made for Jimmy Graham, Rob Gronkowski, and others. All rejected. My running backs were great. Jamaal Charles is a core part of what the Chiefs do, and Eddie Lacy has become the focal point of the Packers offense. But I have had a nagging concern all year that Charles will wind up injured, and is wearing down. I also saw a chance to buy low on a guy like Adrian Peterson. He has not been terrific this year, but he is reaching full health and I like his chances to finish the season with a flourish better than Charles. I decided to package Eric Decker and Charles for Peterson and Jordan Reed. Deal.
I asked folks on Twitter what they thought, and the response was about 70/30 that I was nuts. I think Reed is a sleeper tight end the rest of the way in an offense that is gaining steam in Washington. He is not in the elite tight end class, but is 2nd in tight end scoring over the last three games, behind only Graham. As good as Charles is, his durability and use near the end zone are in question. Peterson can pile up touchdowns in a hurry. Charles was also on a bye last week, while Peterson has already had his.
Decker is a more valuable player than Reed in general, which is why I was hopeful the deal would go through, but not for this team. I am bullish on the rest of the year for Golden Tate, and have Riley Cooper, Doug Baldwin, Marvin Jones and Keenan Allen to fill in. Every one of them have outscored Decker over the last three games. Plus, he’s a Bronco. Screw the Broncos.
So far, so good. Peterson and Reed both scored in double digits and helped the BALTYs to their highest point total of the season, and highest in the league for the week. That will earn us a prize. Keep an eye out for the giveaway once I learn more.
Ten weeks into the season, the BALTYs stand 5-5, just outside the playoffs. They have scored the third-most points in the league, but have faced teams that seem to have their best week when facing them. There seemed to be a big advantage two weeks ago when the opponent had to find a backup quarterback with his starter on bye, only to find Case Keenum going nuts and carrying him to victory. We have only three more games to qualify for the playoffs. We need to win ’em all.
Start typing to see results or hit ESC to close
real hawk talk softy russell wilson 49ers rams
See all results