Logo by Kevin Gamache, Hammerhead
Confidence is born of experience and result. It can be faked with tricks of the mind, but its true form must be earned through a crucible of moments where belief is truly tested. Beating the meek and the weak fills you with a false sense of your worth. Taking on the mighty, feeling their blade glance by your neck, and tasting triumph, transforms hope into faith and belief into certainty. Seahawks players entered with well-earned confidence from regular season success. They exit with the certainty that their greatness is not limited to division titles and home-field advantage. Facing a team most outside this city consider the toughest in the NFL, playing the best football in the league, questing for their sixth Lombardi trophy, and allowing them to take a 10-0 lead, this Seahawks team fought their way out of the corner, and did not stop punching until their opponent lay broken and beaten before them. The mighty have fallen. A phoenix is rising in Seattle, emerging from the ashes of broken dreams of years past. Its wings are broad enough to carry a city as it soars higher. The ride is exhilarating, and it is not yet over.


Rare are the moments when life grants you the privilege of experiencing something special and the awareness that you will carry it with you the rest of your life. Seattle may go on to win the first Super Bowl title in team history, but this game will forever be remembered. The comparison to the 1981 San Francisco victory over their arch rival Dallas Cowboys in the NFC Conference Championship proved apt. That game was ugly at times for the home team as well, including a mind-boggling six turnovers. That game had The Catch. This one had The Tip.

The greatest moments are born when the outcome is uncertain, when your faith faces the ultimate test. San Francisco played a fantastic game in a relentless environment. Colin Kapernick was a terrific offensive weapon, and made clutch throws I was not sure he was capable of. The 49ers would have beaten any other team in football last night. They were that good. Their final drive was special, against a defense that measures opponent progress in inches instead of yards. Kaepernick’s 4th and 2 scramble and throw to Frank Gore could have been another play added to 49er lore, but his final throw ensured it would simply be forgotten.

On 1st & 10 from the Seahawks 18 yard line with, fittingly, 0:31 seconds left on the clock, Kaepernick took the snap and immediately had Cliff Avril pushing Anthony Davis into his lap. The pressure forced a quick throw and did not allow him to step into it. His receiver, Michael Crabtree had run a nice route that left him plenty of space from the sideline to make a catch. Richard Sherman was running with him the whole way and as Seahawks fans have seen him do so many times in such a young career, he flipped his head around to track the ball as soon as it left Kaepernick’s hand. Crabtree attempted to create separation by pushing off on Sherman’s right shoulder just before the ball arrived. A flag should have been thrown, but Sherman made it irrelevant by leaping into the air and tipping the ball in the air back to his teammate Malcolm Smith. Smith cradled the ball and fell to the turf. Euphoria. 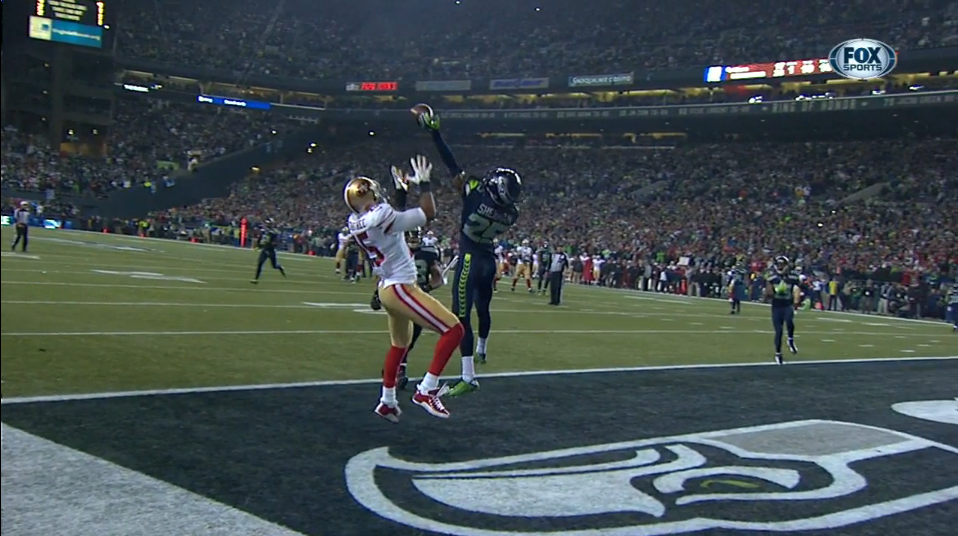 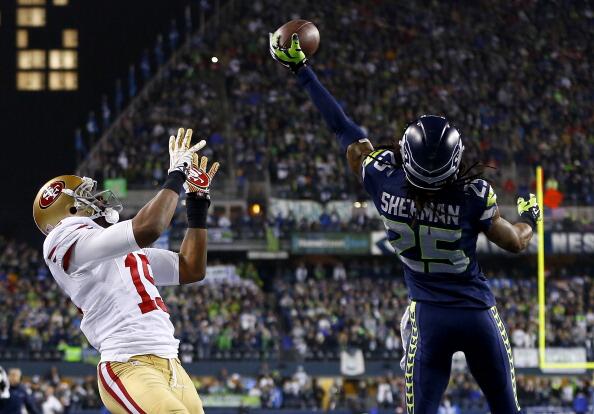 I have never cried at a football game, or any sporting event for that matter. At that moment, taken so close to the breaking point, I crumpled to the ground in front of my seat at Century Link Field and began sobbing. Celebration surrounded me. My strength was gone. My throat was shredded. Truth felt like fiction. Reality was a dream. The Seahawks had played 619 games over 38 years entering Sunday, but none like this one. No victory was ever sweeter. No accomplishment any greater. We wake up this morning NFC Champs for the second time in franchise history, but this feels like a first.

Beating an aging Mark Brunell and the Redskins and then a limited and injured Panthers team in 2005 was something none of us will ever forget, but this path has been so much more wrought with peril. The Saints and 49ers were both better teams than any the Seahawks faced back then, including the Steelers in the Super Bowl. Both have now fallen at the hands of the greatest team in Seahawks franchise history. A team with no weakness, only varying levels of strength.

This offense has been criticized and outright dismissed by many. The story those people wanted to write was that opponents had figured out the Seahawks and Russell Wilson. These Seahawks receivers are average, they like to say. The absence of Percy Harvin dooms them. Seattle presented evidence throughout the evening to make a compelling case for their worth.

Exhibit A: Only two teams had reached 23 points against this 49er defense in the last 15 games. Seattle did it in the NFC Championship

Exhibit B: Trailing 10-0 early, Seattle went on to outscore San Francisco 23-7 from that point on

Exhibit C: Wilson threw for over 200 yards against the 49ers for the first time, and had a 104.6 passer rating

Exhibit D: No running back had eclipsed 100 yards rushing vs the 49ers this season. Marshawn Lynch did it for the fourth time in his last six games against them. That included the longest run of the season against San Francisco.

Exhibit U: Jermaine Kearse makes a spectacular touchdown catch to give the Seahawks the lead for good.

Something tells me that locker room is especially fond of Exhibits F and U. Doubters welcome.

Darrell Bevell, Tom Cable and crew did a terrific job unfurling an offense that looked diverse, balanced, and dangerous. Everyone that wanted the Seahawks to feature a new twist had to be thrilled with what they saw. Alvin Bailey was part of a jumbo package that directly led to the turning point touchdown for Lynch. It was used liberally throughout the game. The passing game included far more high percentage throws that led to more 2nd and less than 5 situations than the Seahawks have seen in month. Even third down performance was pretty solid for much of the game, featuring Golden Tate on clutch slant routes that he has not always thrived on, especially against San Francisco.

For all the bouquets, it is worth noting that too much may have been installed too quickly. The amount of mishaps and miscommunications resembled a team coming out of training camp more than one on the doorstep of the Super Bowl. Wilson and Lynch were out of sync a number of times, and those miscues nearly cost the team the game. The decision to go for it on 4th and inches near the 49er goal line was a good one since even failure meant San Francisco would take over just outside their own end zone. The call to run it with Lynch was also easily justified. Struggling with the timing and the hand-off from Wilson to Lynch was not defensible. That mistake meant the Seahawks ended the game 0-3 in the red zone. That must improve.

Special teams once again played a large role. Baldwin’s big kick return flipped momentum and the field back in Seattle’s favor. Steven “Hausch Money” Hauschka nailed three more kicks, showing cool under pressure. A fumble by LaMichael James early on could have been a pivotal play, but the 49ers recovered. The ball seemed to bounce San Francisco’s way a few times.

Michael Bennett had a big strip sack later in the game, and the ball laid there on the turf for what felt like centuries before a 49er lineman scooped it up and actually gained yards on the play. Earl Thomas has a pass go right through his hands for the 49ers second touchdown on what was a great catch by Anquan Boldin. Still, the defense put on another show.

This was supposed to be unstoppable San Francisco offense that featured all of their weapons. Let us do a a quick weapons check:

Anquan Boldin: 5 receptions in 9 targets for 53 yards and a touchdown

Good luck winning many wars with that armory. The only weapon that kept this game close was Kaepernick’s legs. Most of his yards came on pass plays that turned into scrambles. As breath-taking as his speed is in the open field, no offense can live off of broken plays. The running backs managed just 17 carries for 31 yards, or 1.8 yards per carry.

Holding the opposing quarterback to a 56 passer rating and opposing running backs to 1.8 YPC is championship-level defense.

K.J. Wright returned for this game, but Smith played most of the snaps. His interception on the final play means he has three interceptions in his last four games. He continues his outstanding work, and is going to be hard to keep off the field.

Bobby Wagner set a career high for tackles with 15. Doing that in the biggest game of his career speaks volumes about who he is now, and what he can become.

Kam Chancellor was the baddest man on the field once again. His 11 tackles and interception do little justice to his impact on this game. That is best measured by the bruises and limps in the 49er locker room.

Bennett and Avril continued to be among the best free agent signings in team history. The two combined may rival what Reggie White meant to the Packers when he signed there. Both had strip sacks (or ASS Avril Strip Sack, as I like to call it), and were collapsing the pocket all game. Brandon Mebane, Red Bryant, Tony McDaniel and Clinton McDonald clogged the middle beautifully.

It was a total team win. This is a total team. Others will spend two weeks dissecting their words and their past, but Denver better damn well focus on what happens when these players step on the field because anything but their best will result in pain and misery. The Seahawks entered last night with belief. They enter the Super Bowl with confidence that will not be shaken. No team in football is tougher to play than the 49ers. No game was bigger to them than this one, and yet, it was the Seahawks who took the best shot from the best opponent and came out a winner. Overlook the offense. Belittle the receivers. Criticize the swagger on defense. This team is built of steel forged in the fiercest fires. They are impervious to the ignorant, and deadly to the unprepared. They have lifted a city and fan base on their shoulders. There is a first time for everything, but there can only be one first time. One more step.