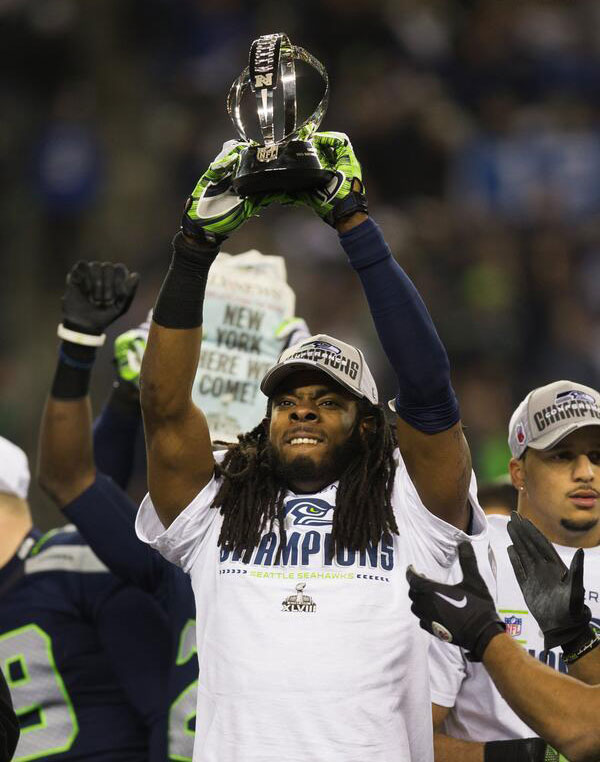 You may not have heard, but the Seattle Seahawks beat the San Francisco 49ers Sunday night to win the NFC title and earn a trip to their second Super Bowl. It was kind of a cool game, too. Lead changes, big hits, breath-taking plays in all phases of the game made this a game to remember. Yet, mere seconds after the game ended, all anyone wanted to talk about was how Richard Sherman handled himself. The controversial cornerback is the best in the game and a fascinating person. People continue to try to fit him into a box, but he is not one thing. He is abrasive. He is intelligent. He is brash. He is caring. One thing he is not, is selfish. What he did on Sunday is being described as a selfish act. The outcome certainly supports that assertion, but the responsibility for that outcome is shared.


Michael Crabtree is a mediocre receiver. Sherman is the best corner in the game. These were the points Sherman drove home repeatedly on Sunday. Evidence suggests he may be right on both accounts.

Sherman made the biggest play, at the biggest moment, of the biggest game of the year thus far. He is also a first team All-Pro corner that led the NFL in interceptions despite being thrown at less than nearly any other corner. Only two players since 1980 have had more interceptions in their first three seasons in the NFL than Sherman. There is not a better resume in the NFL for that position.

Crabtree has played in six games, including this past Sunday, against the Seahawks since Sherman came into the league in 2011. He has totaled 22 receptions in 39 throws (56% catch rate) for 277 yards and zero touchdowns. That works out to a per game average of 3.7 receptions, 6.5 targets, and 46.2 yards. It would be hard to call that production anything but mediocre.

There is undeniable truth in what Sherman said. That is one aspect of his personality that people fail to grasp; he rarely makes a statement he cannot back up either on the field or with numerical proof. Trash talking does not do him justice as a descriptive term since it implies his words are worthless. Perhaps “evidence-based derision” makes more sense.

I spent some time with Sherman when he broke into the league, and came away with a clear feel for who he is and what drives him. He told me that he idolizes Muhammad Ali and has always liked to talk big to put more pressure on himself to perform. We saw this happen last season when he initially tested positive for a PED and was at the center of controversy during the appeals process while playing his best football of the season. He asserted that he was the best corner in football during the off-season, and then put together a definitive season to back up the claim. But he does not only make controversial statements to challenge himself. He is a brilliant marketer, and knows taking this approach would be his best chance for recognition of his accomplishments and attract sponsorships to supplant his tiny rookie contract salary.

Going after Tom Brady last season introduced him to the nation. NFL Network had him on for the first time. Taking down Skip Bayless on national television went viral and birthed #BALTY (Better At Life Than You). His Twitter exchange with Darrelle Revis was talked about repeatedly. All these controversies raised his national profile. Much of the attention was negative, but it forced all of them to talk about him as a player as well.

Most people do not compile statistics and look at advanced numbers or watch film to determine who the best players are. They name people they have heard of. They repeat what they hear. And what they hear is that Sherman is a really good player that says things they might not like. Both messages get through.

Contrast that with Doug Baldwin, Sherman’s friend from Stanford who plays on the opposite side of the ball for the Seahawks. Baldwin is soft-spoken and mild-mannered. He plays in an offense that throws the ball less than almost any other in the NFL, but he makes the most of his opportunities. After leading the league in catch rate for most of the season, he dropped off in the last month as Russell Wilson’s accuracy dropped. Still, he finished 12th among NFL receivers that played at least 50% of the snaps this season for their team. Only DeSean Jackson and Kenny Stills averaged more yards per catch and had a higher catch rate than Baldwin. In other words, he is efficient and explosive in an offense fully focused on running the ball. He is also unknown nationally. People constantly talk about the Seahawks receivers, including Baldwin, being average or a weakness on the team. A significant reason that narrative has taken hold is that people do not know these players and will not spend the time to see just how productive they are given the offense they play in. Put Baldwin on a team running an offense like what they do in Denver, New England, Philadephia, Indianapolis or New Orleans, and he would be well over 1,000 yards receiving.

@hawkblogger @DougBaldwinJr lol I have explained it to him …. Very fickle
— Richard Sherman (@RSherman_25) January 4, 2014

There is no way he would have the status he does now without the controversies he has created. And you know how they say there is no such thing as bad press?

This incident was one Sherman almost certainly wishes he could do differently now. Not because he regrets what he said, or the resulting public backlash about him as a person, but because it overshadowed a monumental team accomplishment. Sherman is always careful to recognize his teammates when interviewed. He is beloved in that locker room. Selfish people are not beloved. All talk, no walk people are not beloved. Sherman is neither. He is a brilliant young man who is fiercely competitive that is experiencing more success than at any other time in his life. Mistakes will happen. They do not define who he is. Just like the fact that all of us who have perseverated on this topic instead of the game are not defined by our gossip-mongering and propensity for superficial judgment of people we do not know.

Do not expect any of this to keep Sherman quiet now. The show is just beginning. Sherman will take full advantage of the stage the Super Bowl provides. Watch and listen for what he will say next. He is counting on it.