Too many people believe adding a great young player to your roster is about picking the best prospects. People want to see it as binary, either you have drafted a good player or you made a mistake. That may be true for a lot of teams. It is not true for the Seahawks. Seattle has not excelled in the draft simply by plucking a great player when no other team saw the talent. They have excelled because there is unmatched insight into how the player’s fit into the system they will be entering, and among the best coaching and player development programs in the whole league. Earl Thomas was going to be great wherever he ended up. The same may not have been true for Kam Chancellor or Byron Maxwell or Malcolm Smith. There is a fabulous marriage between the departments responsible for player selection and the ones responsible for player utilization and development. John Schneider has sowed the seeds. Pete Carroll and staff now go to work growing them into the next bumper crop.

Each draft from this front office has had its own flavor. This one may have the fewest number of players to earn snaps as rookies, but has the potential to infuse the roster with starter-level talent across a variety of positions as early as 2015.

The ideal is to find players with high ceilings and high floors. In other words, get a guy who is incredibly gifted with a great chance to realize his physical potential. Players that rank highly in both measures are the ones generally drafted earliest. One of the wonderful separations between Schneider and a guy like Tim Ruskell, is his propensity for taking high potential players later in the draft that may also be high risk. You cannot win the lottery if you do not buy a ticket, and that coaching staff greatly slants the odds in Seattle’s favor that one or more of those tickets is going to be a winner. Schneider took some amazing athletes in the last day of the draft. Here is my initial reaction to each of the picks from a ceiling and floor perspective. High, and to the right is good. 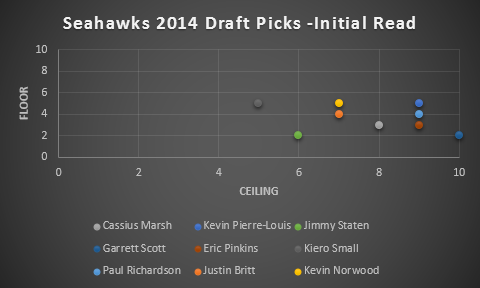 Kevin Pierre-Louis is the early bet here to be someone who has the best potential to become an impact starter. He is an off-the-charts athlete who was compared to Navarro Bowman by the Seahawks scout who was responsible for scouting both Pierre-Louis and Bowman. Set aside whether those players belong in the same sentence. Linebacker is a position where players can come in and make an impact right away. Seattle will have a need for that position when either K.J. Wright, Malcolm Smith, or both, move on after this season. And Seattle has a fantastic track record for identifying linebacker talent in the draft so far. All those factors, plus Pierre-Louis’ elite physical traits and apparently great makeup, give him a great chance to succeed in Seattle.
WR Kevin Norwood and FB Kiero Small match Pierre-Louis in likelihood to reach their potential (high floor), but do not project to be impact players. Norwood is big-bodied at 6’2″, with strong hands and appears to have a good ability to use his body to shield the ball from defenders while going up in the air for catches. This could be a guy that plays 10 years in the NFL as a number two or number three receiver.
Small gives Seattle their only true fullback on the roster. Derrick Coleman, Spencer Ware, and others, are former running backs. Small is built like a fire hydrant. The Seahawks would love to get by without a pure fullback. They tried last year, but wound up bringing Michael Robinson back (who isn’t even a true fullback as a former college quarterback), and the difference was apparent in the running game. Small can force his way onto the roster by demonstrating a significant difference in his ability to create space for Seattle running backs when compared to the hybrid fullbacks and h-backs on the team.
Richardson could grow into a true #1 receiver if everything falls into place. He has Mike Wallace speed and is far better at getting in and out of his breaks. If he can stay healthy, he’s at least a #2 receiver in a year or two.
Two of the most intriguing picks came late in S/CB Eric Pinkins and OT Garrett Scott. Pinkins is a 6’3″ 220 lbs monster who played safety in college. He originally played cornerback, and Seattle intends to convert him back to that position for now. I have a good feeling about this selection. Carroll knows secondary talent so well, and the Seahawks have had such luck with late-round corners, it is not hard to imagine Pinkins standing opposite Richard Sherman in a year or two. He may also work out as a backup to Kam Chancellor, which would be a fantastic. At the very least, he is a great addition to the special teams group.
Scott is, in many ways, the antithesis of second round pick Justin Britt. He is an off-the-charts athlete who is said to run a sub-5.0 40 at over 300 lbs, while standing 6’5″ tall. Where Britt has a much better chance to stick and succeed due to his skill, technique, and toughness, Scott could wind up being the best player on the Seahawks line if Tom Cable can add those traits to Scott’s resume. Scott has the potential to be the best player of this draft class if everything comes together. The odds of that happening are pretty long, which is why he was available so late.
Cassius Marsh will get a chance to compete at the LEO spot, and also can slide inside as a pass rusher in nickel situations. The area scout who was responsible for his spot on the Seahawks draft board noted the similarities he saw between Marsh and Michael Bennett in terms of line versatility. He is long at 6’4″, and uses his hands well to ward off blockers. I liked what I saw of him getting around the edge, and am hopeful he will contend for snaps with the like of Benson Mayowa, O’Brien Schofield and others at the LEO position.
Jimmy Staten goes in the wait-and-see category. There is not a lot to go on, and the talk was to use him at a run-stuffing defensive tackle. The Seahawks have not done a great job of identifying defensive tackle talent through the draft so far. Even if Staten pans out, his ceiling is probably more along the lines of a rotational player.

It is easy to look at the terrific talent added in St. Louis, or the apparent bounty in San Francisco, and be envious. People are already going back to calling the 49ers the best roster in the NFL since they can no longer call them the best team. Seattle won a Super Bowl with an insanely young roster. They do not need to build a championship team. They already have one. Of course a team must prove their mettle every year, but remember where Earl Thomas, Russell Wilson, Kam Chancellor, Richard Sherman, Bobby Wagner, K.J. Wright, Byron Maxwell, Marshawn Lynch, Russell Okung and a litany of other young Seahawks would be have been drafted if available in this draft. The whole first round might have been Seahawk players.

Carroll and Schneider appear to have added players at key spots who can help keep this train rolling. And that does not even include the bevy of undrafted free agents they have signed, where the team has found a consistent stream of quality talent. The next step is seeing them with my own eyes at training camp.