Players are told to approach each game one play at a time and each season one game at a time. Coaches and general managers build up their rosters and teams one season at a time. Fans are different. Seahawks fans have been around long before any current coaches, players, general managers, or even owners, and will be here long after they are gone. Fans endure. Seahawks fans have endured playoff droughts that lasted more than 10 years. They have endured referees that feel so bad about the quality of their championship calls, that they feel compelled to come forward and apologize years later. And now, they have felt the pure elation of winning a Super Bowl for the first time. Being a fan allows for a big picture perspective that nobody else can afford.

Patterns from history often repeat. Even while some teams have broken from their franchise histories in recent years (e.g., Patriots become champions, 49ers become a joke for a decade), much can be learned by exploring the patterns across generations. Before diving into the detail of this 39th season of Seahawks football, take a moment to see where we are in franchise history.

FRANCHISE QUARTERBACKS
It all starts with the most important position on the field, the quarterback. Russell Wilson becomes the fifth quarterback in Seahawks history to be the opening day starter for three years in a row. Matt Hasselbeck enjoyed the longest stint as opening day starter, notching 10 kickoffs for the Seahawks. Dave Krieg and Jim Zorn each opened eight seasons as the starter. The franchise history at QB looks like this:


Hasselbeck’s tenure was not only the longest, but includes the franchise record for playoff wins (5) and playoff appearances (6). Wilson can tie the playoff win total with one postseason victory this year.

Wilson re-set his team record for passer rating by posting a 101.2 mark. Note how steep the drop-off is overall. The following table shows the top-rated seasons for Seahawks quarterbacks with a minimum of 10 starts.

There have only been five seasons above a rating of 90, and Wilson has two of them after his first two years. There is little doubt the Seahawks are better equipped at the quarterback position then at any time in franchise history.

TEAM STRENGTH
The 2013 Seahawks team was the best in franchise history. Quantifying how good requires a little extra digging. Readers that follow this blog throughout the season are familiar with the power rankings formula I have developed over time to compare teams each week of the season. Those not familiar with it, may want to check out the final rankings from last season that includes a primer. The basic gist is that it measures the efficiency of the offense and the defense of a team and combines to create a single score indicating the overall team strength. I went back through every season of Seahawks football and applied the formula to each team to see which one came out on top, and which was on bottom.

Last year’s team was not only the best in franchise history by this measure, but by a big margin. The 2005 team is not even within the same galaxy as the squad Seattle featured last year. This was a historically dominant team that featured one of the best defenses in NFL history. It will be hard to match that level of efficiency again unless the offense takes a sizable step forward.

The bottom five teams list is also interesting as it includes Pete Carroll’s first season with the Seahawks. They managed to make the playoffs and win a game, which may be one of Carroll’s most underrated accomplishments. The progression from 2010 to 2013 is truly stunning. Carroll inherited the seventh-worst team in franchise history (2009), and turned it into the best in only three seasons, and into a Super Bowl winner in four. Fans that made it through the 90s as Seahawks fans deserve a pat on the back. The team had a negative team strength score for nine straight seasons, starting in 1989. 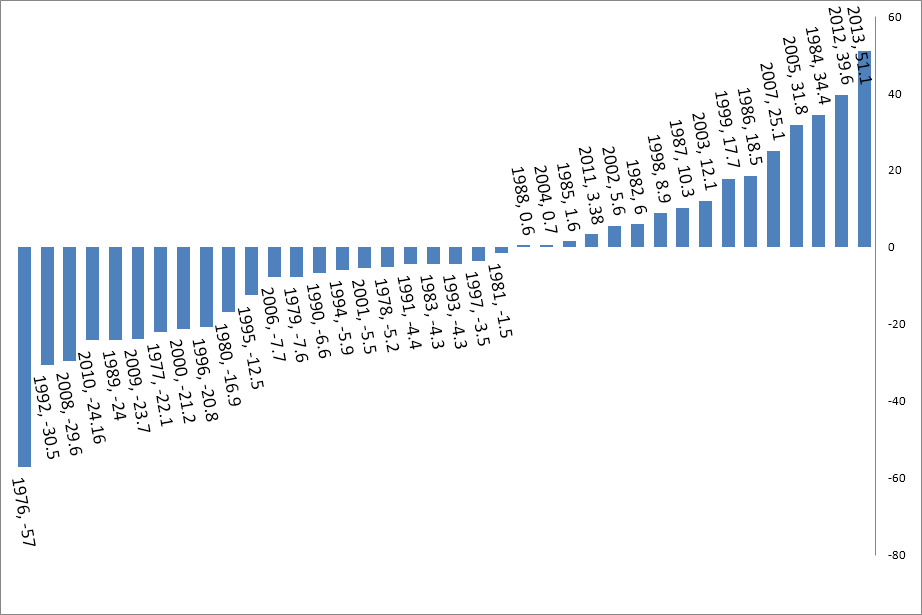 DEFEATING MEDIOCRITY
Winning a Super Bowl is special for any franchise. Seahawks history paints a picture of just how special it was for this one. Take a look at how often the franchise had churned out teams that won between seven and nine games.

Twenty of the thirty-eight seasons have resulted in victory totals between seven and nine. Only seven times has a team won at least 10 games, and only twice has the team won fewer than four games. Getting a player like Wilson in the third round was key. Their chances of finishing with a record bad enough to draft a top-tier quarterback in the first round is incredibly low. Franchise history shows less than a 5% chance of a Seattle squad winning fewer than four games. Carroll and GM John Schneider saw to a two-game improvement in the win total from 2009 to 2010. Chuck Knox remains the franchise record-holder with a 5-game improvement in his first season as Head Coach. Mike Holmgren led a one-game improvement, and Dennis Erickson saw his team improve their previous season’s win total by two.

DIVISION FINISH
Carroll and Schneider led the 2010 Seahawks to the franchise’s seventh division title, and fifth in seven seasons. They won their second division title last year, and became just the second team in franchise history to win homefield advantage throughout the postseason.

The move to the NFC West has treated the Seahawks well. After only winning one division title before 1999, and only two in all their years in the AFC West, the Seahawks have won six NFC West division titles in only twelve seasons. Carroll will have his work cut out for him to match Holmgren’s starting sprint with the Seahawks when he led the team to either a 1st or 2nd place finish in eight of his first nine seasons with the franchise. Carroll has managed to do that in two of his first four seasons.

OFFENSE
Seattle has historically been a team whose fortunes follow that of their offensive output. Score a lot of points, and they are bound for success. Struggle to score, and they rarely reach their goals.

The Seahawks have steadily improved from 17.50 pts/game in 2009 to 19.38 in 2010 to 20.06 in 2011, and now have plateaued a bit around 26 ppg. This year could see another jump. Note in the graph to the left  that scoring has a rather strong correlation to team victories. The team’s best scoring season happened during the 2005 Super Bowl run. Some franchises are built around defense. The Seahawks have historically relied much more on a powerful offense. Carroll came to Seattle with a defensive pedigree, but has not had as much success building winning offenses in the NFL. This year could change that perception.

DEFENSE
Carroll reputation on defense has proven to be accurate. He was a defensive player in college, coached defense in college and the NFL, and made most of his initial changes to scheme in Seattle on the defensive side of the ball.

The results were mixed. Only three Seahawks teams have allowed more than the 25.4 points per game Seattle gave up in his first season, and none since 1980. Outside of 2003, when they gave up 20.4 points/game, all of the Seahawks 10+ win seasons have featured a defense that gives up 18 points or less. Seattle gave up a franchise-best (ignoring the strike-shortened 1982 season) 14.4 last year and won 13. Score 25+ and give up 18 or less. That’s the winning combination for Seattle teams.

Seattle has led the NFL in scoring defense for the last two seasons.  They have shaved 11 ppg off opponent scoring over the last three years. Check out the cliff dive in the chart above from 2010 to last year. Scoring is increasing in the NFL overall, making the achievement all the more impressive.

Defense has not correlated as strongly to Seahawks victory totals over the years as offense. Carroll may be the most defensive-minded coach at the helm outside of Jim Mora Jr. It will be interesting to see how much he breaks the franchise from tradition. Many of the most memorable players in franchise history were defenders. Players like Jeff Bryant, Jacob Green, Kenny Easley, Cortez Kennedy, Sam Adams, Chad Brown, Rufus Porter, Lofa Tatupu, and many others. It is looking like a number of the current crop of Seahawks defenders will add their names to that list.

THE JOURNEY
It is tough to shake the feeling that as much as history has to teach us, this Seahawks franchise closed the book on their past last year, and are writing an entirely new volume now. They are not defined by mediocrity, near misses, and bungling referees. They are champions; the youngest champions in the history of the NFL. Comparing them to even the 2005 team seems unfair because the difference in quality is so great. But like all self-made success stories, we must own where we come from and where we started. Nobody likes the superstar who won’t acknowledge his friends from home after striking it rich. Nor is their any loyalty among the new onlookers when fame is achieved. Seattle fans ached for this moment for 38 years, and players like Jim Zorn, Steve Largent, Hasselbeck and Kennedy have played a key role in our collective journeys. We now focus on what should be a golden era for Seahawks football. One ring is not enough for a team this talented and young.

History shows that the Seahawks are championship contenders when they score over 25 points/game and allow less than 18/game. It would be a serious disappointment if the Seahawks offense or defense did not blow by those numbers this season.

This franchise has evolved from irrelevant to indisputable. Now it is time to ascend to the elite. The Steelers, the 49ers, the Cowboys, the Packers are considered a different class than one-timers like Seattle. The Seahawks are poised to force their way into the pantheon.

We will explore the upcoming season more deeply in the rest of the Hawk Blogger 2014 Season Preview.